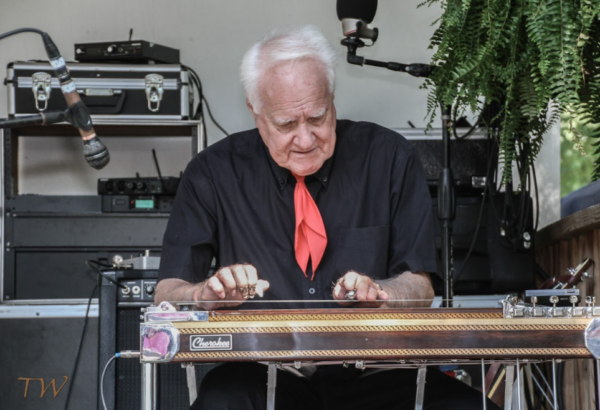 “Ask him about Mick Jagger dancing on a table, listening to Super Grit in New York City.”

That’s the sort of intriguing response prompted by the mere mention of Clyde Mattocks’ name in these parts. Incredibly, he’s been accumulating colorful stories as a musician for 70 years. Trying to credit all the bands and accomplishments of the Kinston native is futile. But those with deep roots in this area surely remember the Super Grit Cowboy Band Mattocks co-founded in 1974. New York’s Village Voice newspaper called the band “the south’s hottest honky-tonkers.” 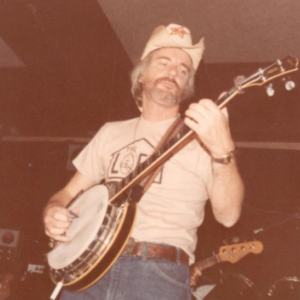 “We hit the wave at the just right time,” Mattocks says. “We didn’t know what we were doing. We had 4 or 5 guys from different backgrounds but they were good musicians. The Eagles, Poco, and those bands from Colorado, and California….we would play that stuff here and people would look at us like we had 5 eyes. What is this? And then in a few months, it caught on here and us and Sutter’s Gold Streak were the top of the heap. We made it up as we went along.”

But Super Grit is just one feather in Mattocks’ Stetson hat. The man who is routinely called the best pedal steel player in North Carolina (and some venture to say in the world) has made, and is still making, his mark on a lot of styles of music. Super Grit might be characterized as southern rock, Without Further Ado as country, and Highway 58, bluegrass. Not to mention the times he’s played traditional bluegrass with the supergroup of pickers, the Carolina Yellow Hammers. And those are just a few of the bands he’s been involved in.

I wondered which style Mattocks would say is his favorite, or would that be like asking someone from eastern North Carolina to choose between fried chicken and barbecue? Or homemade banana pudding and Grandmama’s coconut cake?

He neither hemmed nor hawed. “Bluegrass, truly, is my favorite music,” he says. But hearing the story about how Mattocks got started playing is like reading the prequel to a favorite book.

“There was a family across the street…the whole family played music,” Mattocks remembers. “I was 12 or 13 years old. And in the summertime, I would stand out on the sidewalk…windows were opened then, no air conditioning, and listen to them play their music. Finally they noticed me and invited me in and I saw a guy play a steel guitar and it just set me on fire.”

Seventy or so years later, the heat from that ‘fire,” that palpable passion for music, radiates as he tells the story.

“That was the instrument I’d been attracted to. I’d been hearing it on records and I didn’t know what it was. Same thing with the Dobro. I’d been hearing the Dobro on the Grand Ole Opry with Roy Acuff and I had no idea what was making that sound. And when I saw one being played…oh! The light went on.”

Music never came hard to him, he explains. “I always thought if I had me one of them instruments, I could play it. And I did. The fiddle was a challenge…I never mastered the fiddle but I was able to play a tune on about any other stringed instrument…banjo, mandolin, guitar, steel guitar, bass…upright bass, electric bass. It came easy to me. I understood what was going on with it.” 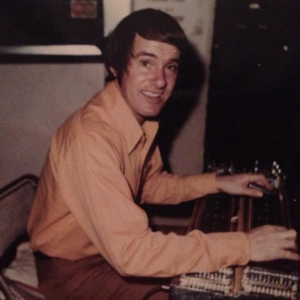 Mattocks remembers getting his first instrument when he was 14. “I got my first little lap steel for Christmas…my mom and dad bought it for me,” he says. Incredibly he adds, “I was playing in a band in six weeks. I tell people the reason is because back then, people didn’t know whether you were playing one well or not. And I’m still playing for the same reason.”

Marking time by his musical heroes, Mattocks remembers that Hank Williams, Sr. died shortly after he started playing.  “How I got started in a band…there was a local band playing in front of a furniture store and I noticed they had a guitar player about my age. So I went and started talking to him and he found out that I was learning to play the steel. We started getting together on Sunday afternoons playing together, working out the between-guitar parts, like on Carl Smith records. And he politicked to get me in his band, the Carolina Buddies. Pete Frazier’s Carolina Buddies…we played at the American Legion for two dollars and a half a night.”

But playing music was not always accepted as a suitable pursuit. “When I grew up and went to high school, people looked down their noses at hillbilly music…and even my own parents in the beginning equated hillbilly musicians with carnival workers,” Mattocks says. ”They began to realize that the people I associated with were good people, and they really got into it then.”

Right out of high school, he went to Florence, South Carolina to play with Slim Mims on radio and television. Slim and the Dream Ranch Gang had a show on WBTW and also on Channel 7, WNCT-TV in Greenville, called “The Silent Flame Jamboree.” 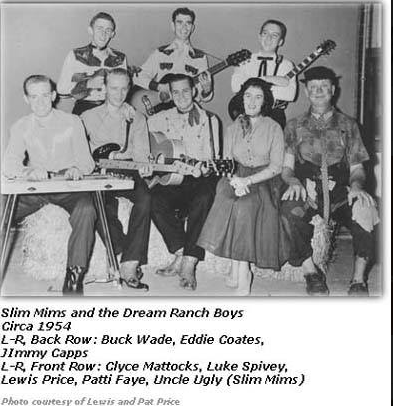 It was in that band that Mattocks was able to do what became a lifelong pattern of his…give a leg up to a fellow musician. In this case, it was Jimmy Capps, a guitar player who would ultimately become a member of the Grand Ole Opry’s house band for more than 50 years.

“We didn’t have a guitar player. The bass player and I would switch off on guitar. One day Slim said ‘I’d hire a full-time guitar player if I knew one.’ I said, ‘Let me make a phone call.’ I called Jimmy and he was sweeping out a grocery store in Benson. He accepted the job right then on the phone because it was his dream to play music for a living. We were lifelong friends….we roomed together. I would go up and spend a week with him in Nashville and he would take me around to all his recording sessions. I met a lot of the top musicians in Nashville through him.”

Mattocks was the one who encouraged the Malpass Brothers to play Louvin Brothers’ music, a move that would advance their career. He says, “They (the Malpass Brothers) were doing just standard gospel stuff and I got them a shoebox full of cassette tapes of the Louvins and said, ‘This is what you need to listen to…this is the higher form of the country duet.’”

He invited a violinist, Sarah Hollis, when she was still in high school, to play with his bands Without Further Ado and Highway 58: “Sarah Hollis is a very talented player….she could play any style she wanted. She could have went to Nashville and played in Reba McEntire’s band. She is every bit as good a harmony singer as she is a fiddle player.”

Currently he has a 10 year-old girl, Lizzie, playing drums in Highway 58.

“Clyde is a mentor,” fellow musician Dan O’Day says. “The thing I admire about Clyde is that he’s a teacher.”

Over his memorable career, a few special moments stand out that he was willing to share.

“Playing with Bill Anderson and the Wilburn Brothers and Skeeter Davis at the Orange Bowl, in front of hundreds of thousands of people. There were a bunch of rock and roll stars there too. Bill didn’t have a band then, he was using us as a pickup band, and he came out and said, ‘Well we know y’all people don’t care much about country music.’ He started singing ‘Po’ Folks’ and people went crazy.”

Referring to his age, Mattocks says, “I’m so old, no one can contradict me.” But one great advantage of longevity is a wealth of first-hand knowledge. He even remembers Ervin T. Rouse, from Craven County, who wrote “The Orange Blossom Special.”

“Ervin used to come and sit in with us back in the 50s. We’d be playing like in Rocky Mount or somewhere and he’d come,” Mattocks remembers. “He went from Florida up to Virginia, following the tobacco market in an old Chevrolet painted blue. Everything was painted. Windows, the back windshield, everything except the front windshield. And he and his brother lived in that car and played tobacco warehouses for tips. And he’d say, ‘I wrote the song ‘Sweeter than the Flowers’ for Roy Acuff and if it was good enough for Roy Acuff it’s good enough for me.’”

Mattocks remembers that the words we know from the song “I’ll ride that Orange Blossom Special / And lose these New York blues” are not the original ones. “The original version was ‘Lose these Craven County blues,’” Mattocks says.

These days rarely an article is written about Clyde Mattocks without referring to him as a legend. In response, Mattocks says, “Forget this legend stuff…I’m just trying to be relevant today. I would like to be remembered for having done something for the music.”

With that, he slid his CD “Over My Shoulder” in my direction and says with a gleam in his eye, “It’s a steel guitar CD, so you’d expect to find ‘Steel Guitar Rag’ on it. Well it is and it isn’t. It’s there, but it’s hidden.”

The Man of Steel proves he is also quite the Man of Mystery.

But having listened to the CD, I have to agree with the lyrics to the 1936 Bob Wills song “Steel Guitar Rag”:
And when they slide that thing along the strings
It sounds so doggone heavenly, you hear an angel sing. 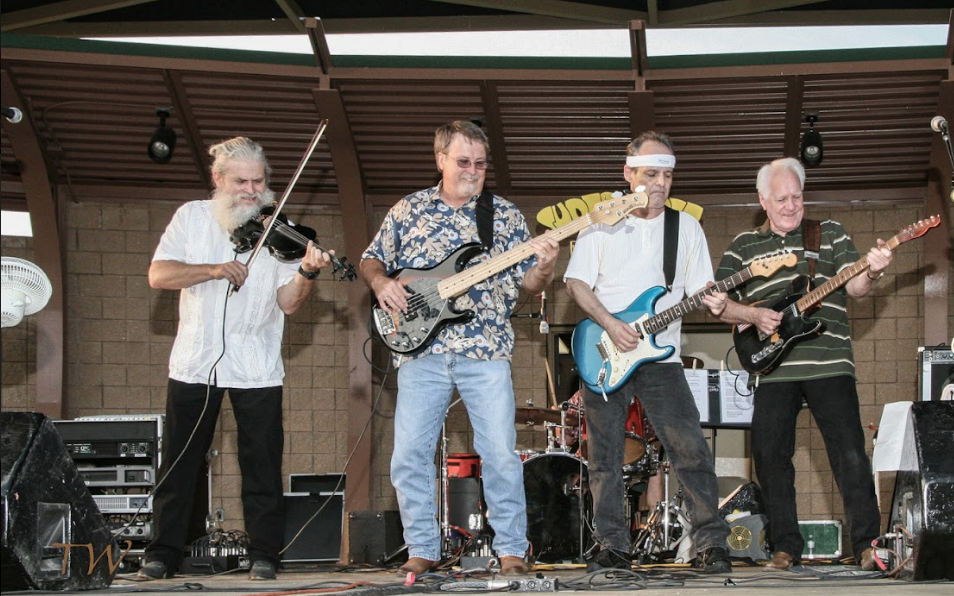 Supergrit at Sunday in the Park, Greenville, 2007. Photo by Tom Whelan. 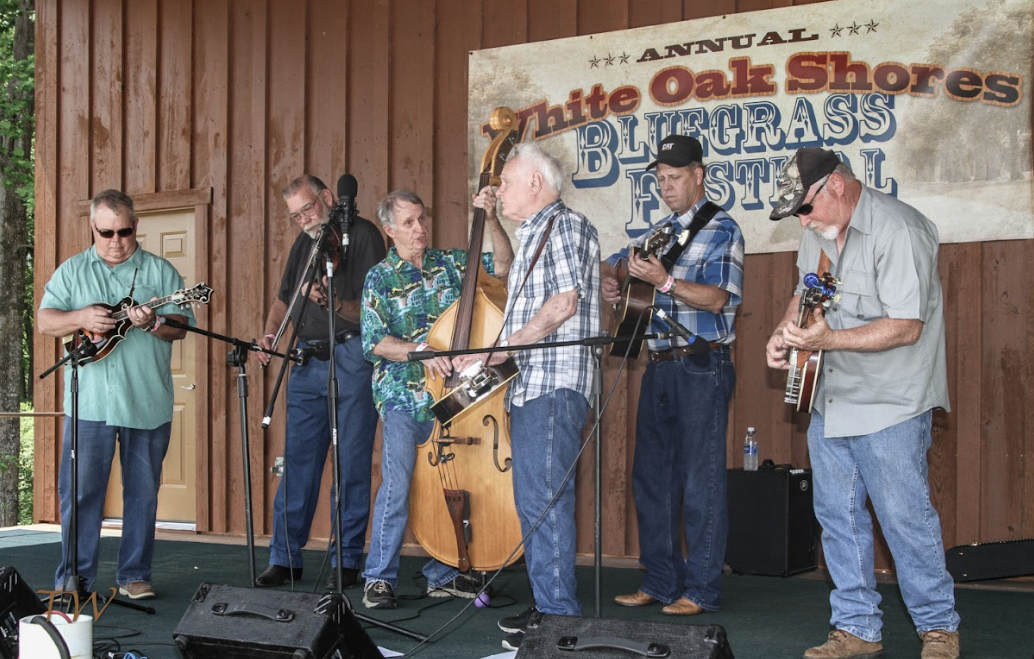 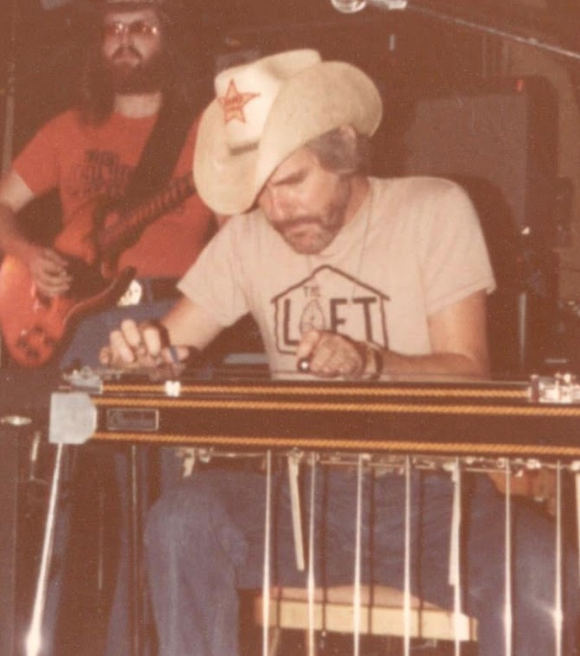 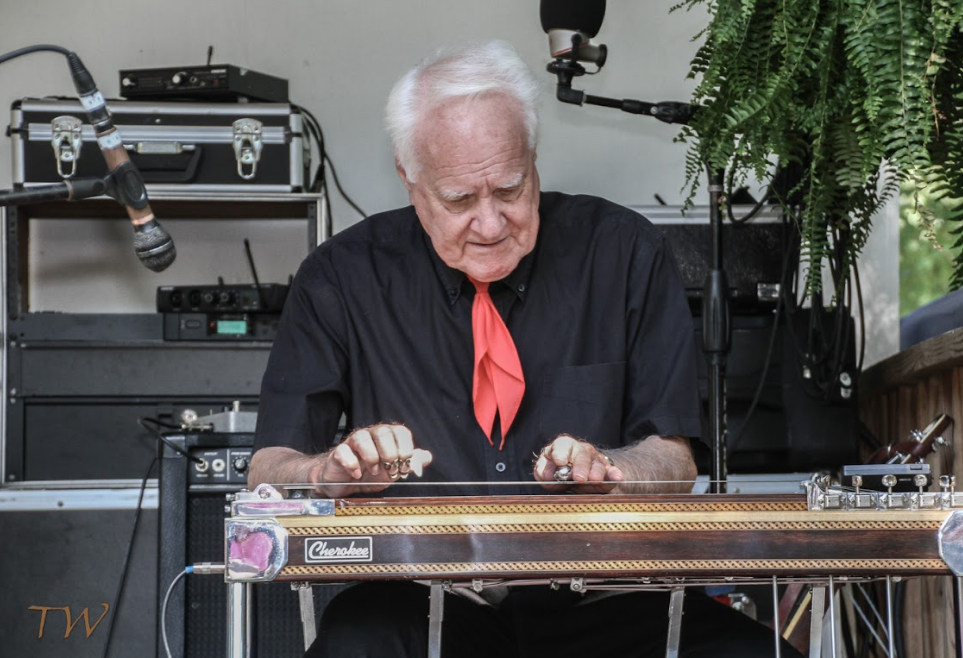