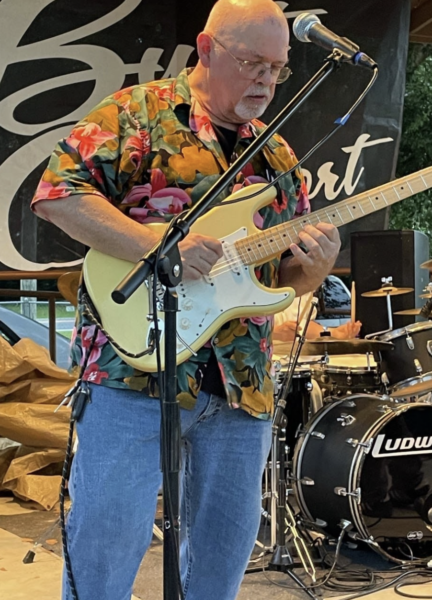 Landy Spain wasn’t channeling Bob Ross with that comment, but was referring to his experience in the myriad of bands he’s played in–33 by his best guess, not counting special projects. Like Groundhog with Joe Tronto, while in high school. Or Jasmine. Briefly there was the Benefit Blues Band formed with Lightnin’ Wells, Mike Hamer and Joe Tronto to play a benefit for independent soul radio station WVSP. There was Spice, with saxophone player Bel Powell from the late ’70s to early ’80s, and PBS with Powell and Larry Boyette. Then there was Knocked Out Loaded with Laura “Lemon” Davis, a jazz band called Spiral, and the R&B/funk band Spain initiated in the ’90s, Cold Sweat. Saints of Soul was a beach band, and then John [Benson] and Landy (reincarnated in more recent times as the Ol’ Gringos now that they are ol’ enough.) The Mike Corrado Band was a contemporary rock band featuring original material. Then the Mikele Buck Band, Victor Hudson Band, and his still-active blues/rock/Americana band, Built for Comfort. And there was the hot sound of Cold Biscuit.

And that’s not even trying to be a comprehensive list. Spain’s belt isn’t long enough to make notches for all the bands he’s played in. The “happy accident,” Spain explains, is “when you’re playing or rehearsing and make a mistake and it turns out better than you planned.” Some folks just call that jazz.

Spain’s philosophy is cooperative. “My job is to enhance whomever I’m working with,” he says. “To contribute. It’s about the song, not me.” When working with other musicians, he explains that “really listening helps and informs what I play.”

Spain considers himself a guitarist first, and singer second. “My folks made me take piano lessons for a couple of years,” he said. But he heard Bill Haley’s “Rock around the Clock” when he was 10 or 11 years old and wanted to play guitar.  “Then they bought me a guitar for my 12th birthday from Rose’s for $25.”

With a social media profile that says he studied at “the university of rock and roll” and worked at the “school of sleazy lounge jazz,” Spain remembers practicing so much that there were times when he fell asleep holding a guitar. He gravitated to blues guitarists like B. B King, and played jazz band in high school. “I was very fortunate to have met Landy at Rose High when I moved here in 1970,” Joe Tronto says. “We became fast friends and discovered our love for blues oriented rock music and jazz. We had a band in high school shortly after named Groundhog. Only recently I became aware of the fact that Groundhog was the fifth band to play at the Attic. Landy was always a good guitar player but where he has evolved to over the years is simply amazing. He can play just about any genre of music.”

When asked if he could choose a style of music he likes to perform best Spain says, “I like to play lots of different stuff. If the music is good, I like it.” And that includes a wide range, from Patsy Cline to Rick James  to Miles Davis. Showing a glimpse of his independent spirit, Spain says,“I didn’t play a Lynyrd Skynyrd song until I was 50 because people kept telling me I had to.”

A photo of Spain playing with Built for Comfort prompted the comment, “I bet your neighbor is not as cool as my neighbor, shreddin’ with his hat on backwards and soul sweating out his pores.”

But you know you live in a small town when folks can tell you how many guitar players live there. According to R.A. Fountain’s website, Spain is “one of three outstanding guitarists that happen to call Fountain home.” The store’s proprietor, Alex Albright, who has known Spain for a number of years says, “Landy’s a very intelligent musician and an excellent picker, which makes for a great combination in a band leader. He also has a wealth of knowledge about blues bands, musicians and songs and especially their arrangements.” And when it comes to arranging music, Spain says, “I like solving puzzles. That can include rearranging a tune to fit the instrumentation or entirely reinterpreting it.”

As a teenager, Spain remembers when Greenville had clubs on every corner. “It’s coming back,” he says, “but more dispersed, like in the breweries and restaurants.”

What advice would the veteran musician give to his younger self or to musicians coming up? “Keep the reading chops up.” And by that, he’s not talking Oprah’s Book Club, but music notation.“I used to read music,” Spain says, “but put a chart in front of me now…can’t do it. I play mostly by ear these days. I’m actually thinking of taking lessons again this year. I’m entirely self-taught.”

His second bit of advice for aspiring musicians is: “Find musicians to play with that are better than you are.”

When asked what he’d like to do, musically, in the future, Spain says, “I want to do another band with a female vocalist. I really like working with female vocalists and haven’t done that as much as I’d like to. I like working with them because it’s a different dynamic and you can do different material.” Most importantly, he says, “I want to keep playing and working on music as much as possible.”

Music, for Spain, is “a community kind of thing.” That’s one reason he’s been in so many bands. Someone from a band would need a guitar player and refer him. Musicians help each other out, like restaurateurs calling one another when they run out of stock. “I love it,” he said. “I’ve had it in me as long as I can remember.” 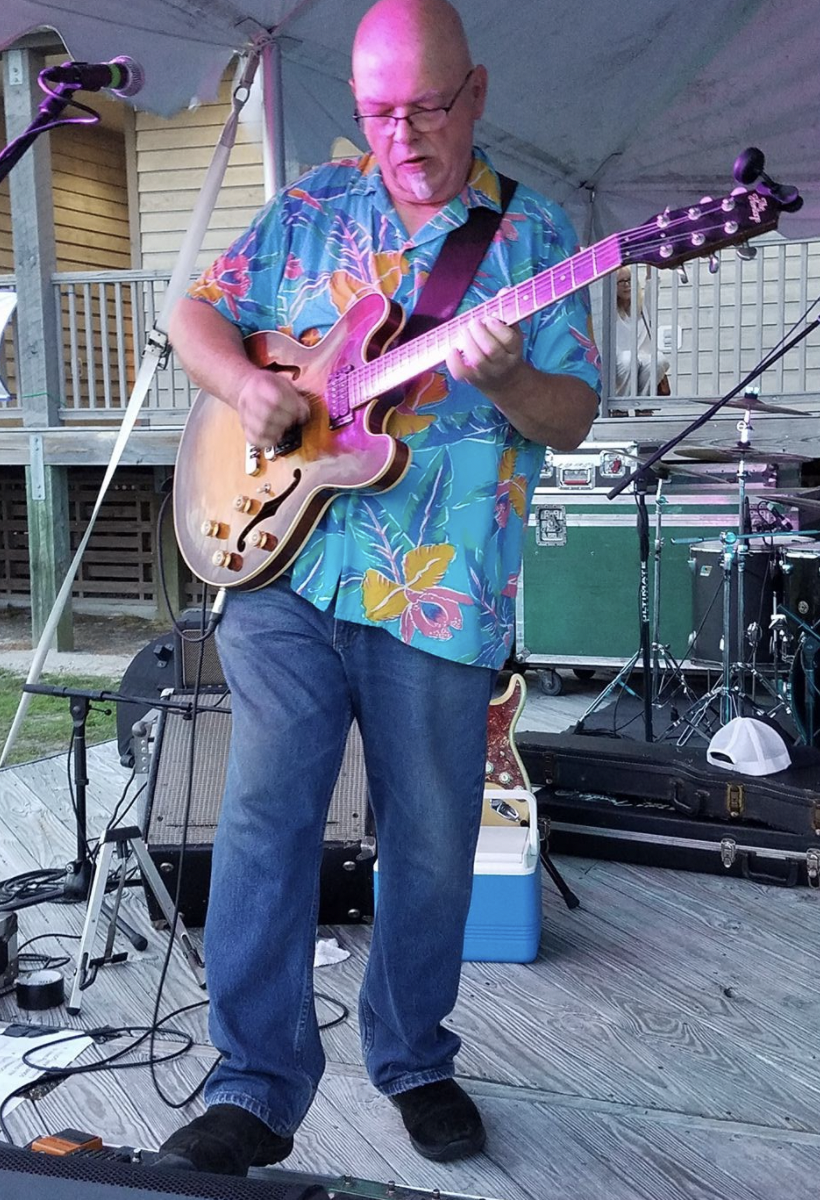