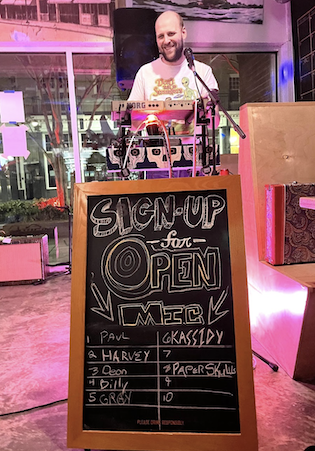 Who is that masked man? Nick Webster, who performs with the Paper Skulls, often while wearing a mask of his own artistic creation, is also open mic host at Molly’s Community Cafe. In his hosting capacity, he is far less intimidating, as he scurries about professionally to set up equipment and introduce performers.

“If you can hear the sound of my voice, you’re at an open mic at Molly’s,” Webster announced cheerfully at a recent weekly event. And it’s good context to provide. Otherwise it might take a customer off the street a little while to realize the significance of the numbered chalkboard list and the variety of performers sitting at tables. It’s perfectly normal to go out for a bite to eat or a drink, carrying your guitar case, like Linus and his blanket.

A mural of Evans Street as it appeared in the 1930s adorns the area above the double front glass doors of the venue. It was painted by Roger Kammerer in the 1980s. A strand of white lights drapes across a wall painted like a black board with food and drink specials of the day written in chalk. Some colorful lights provide a strobe effect, building an atmosphere of expectation.

What motivates musicians to come out on Wednesday nights to Molly’s? “The atmosphere.” Webster says. “Everybody knows who you are. And they’re here to get better, or to share.”

J.T. Ackerman was the first open mic host at Molly’s, followed by Parker Millar, and Webster, who performed at Molly’s regularly and used to host trivia night, was a natural to step in. 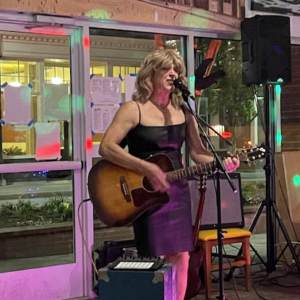 “It’s a community kind of thing,” Webster said of open mic. “I’ve met a lot of people here.” People like “Neon Dion,” “Ken X.” and also Miranda Lynne, who opened with “I’m not like everybody else” by the Kinks.

The singer who followed Miranda began by saying, “Hey, this isn’t fair! I shouldn’t have to follow somebody that sings that good! I know my Miranda rights!”

To which Miranda replied, “I maintain my right to remain silent.”

And while one act might be country, the next could be rap, or electronic-based, like Dave Clark’s “Invisible Engines.”

“Some like to play covers, but probably more people play originals,” Webster said. In terms of styles, there’s no limit and participants tend to cover a wide spectrum. “Billy Smith plays in here and he plays the saddest country.”

“I appreciate open mic,” a performer named Bobby says from the mic. “It gives me a chance to come out here and just be free.”

Each performer takes the stage, that is, the area of the modest sized restaurant allocated for such,  for two or three songs after being introduced by Webster. He adjusts a backing track if they have one, or helps calibrate the levels of instruments and voice. Often performers say a word or two about the song they are about to perform. The audience response, comprised heavily of other musicians, is warm and receptive. It’s a rule that no one ever has to explain: “Be kind. Respond to others as you would like to be received.”

“I remember when I was in college and I went to a lot of shows Jeff Blinder put together,” Webster said. But then there was a period of years when the music scene was not as lively as it once was, and is becoming again. “It’s a new day,” Webster said about the support of local musicians by bars and venues. “We’re working together, “ he said, speaking of other venues hosting open mics. “People are going around from one to another. You can do a tour of all the bars of Greenville in a week.”

Webster said open mic has been running from 8 pm until 11p m on Wednesdays, but these days, often the board fills up before the doors open, so they are considering moving the start time back to 7.

Webster moved to Greenville in 2006 from Graham to pursue an art degree at ECU and never left. He plays synthesizer in the band Paper Skulls, with Lars Riggin on guitar, Pierce D’auria on bass, and Nathan Black on drums. Playing music they describe as “experimental synth-punk jam,” the band plays a lot of house shows, at Molly’s, Christy’s Europub, and the State Theater. 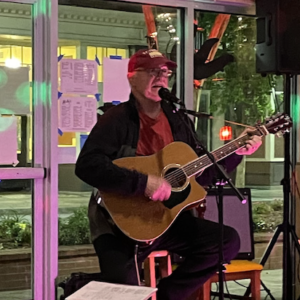 “Nick is a good guy to work with, quiet but friendly, approachable, always ready to help you get set up,” said Harvey Estes, who sang “Down in the Boondocks” and “Proud Mary” at a recent Molly’s open mic. “And his synthesizer is…powerful isn’t a powerful enough word. When I go in with my little guitar and play something and then hear Nick and the earthquake machine…well, I feel like the tiny scout ship in ‘Star Wars’ that gets swallowed up by the Death Star. But of course, it’s a very friendly Death Star.”

The theme from the sitcom about a bar in Boston included the lyrics “Where everybody knows your name / and they’re always glad you came.” Maybe Greenville has discovered something special in Molly’s and other local open mic venues, realizing that welcoming local talent helps customers take a break from all their worries. Cheers! 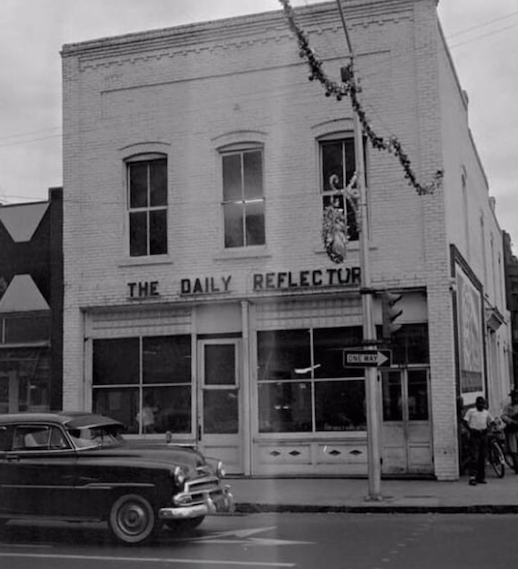 Molly’s, as it used to look, still across from the Pitt County Courthouse, downtown Greenville.