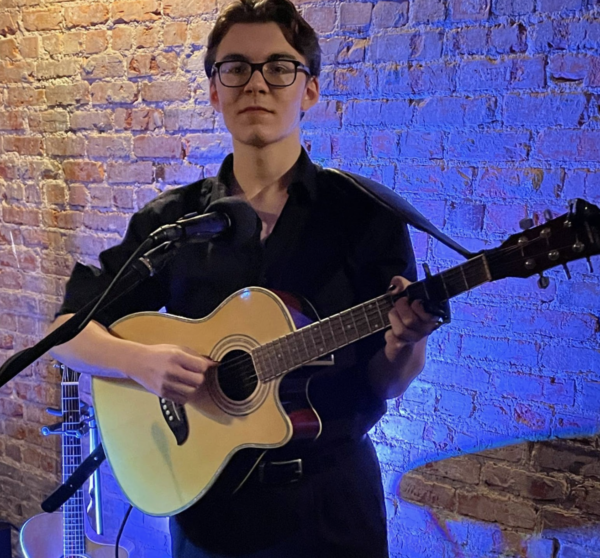 Rose High Senior Is One to Watch

An ounce of ambition and a pound of courage. That’s what it takes to play an open mic. That, and of course a reasonable amount of talent and a song in one’s heart.

It’s 7 p.m. on a Wednesday night at Winterville’s Nauti Dog Brewing  and Stephen Peo is seated at a table up front with his mother, waiting for his turn to play. Two hours later he’s still waiting, but it’s no great hardship. Along with others in the audience, he’s enjoying a cornucopia of local talent at the open mic hosted by Mark Oliver.

He remembers how he felt the first time he played earlier this year as he morphed from spectator to performer, on a dime. “I hadn’t actually intended on playing that night,” he remembers. “I just went to see the other acts because a friend of mine had been playing there. There weren’t many people playing that night so the host [at that time, Joe Shingara] kind of goaded me into playing a song on his guitar. I remember being incredibly nervous the first time. My legs were shaking like crazy. But the audience loved the songs I played, and the warm reception I received encouraged me to keep going.”

And it all began with a cherry red Squier Stratocaster.

Actually the music foundation started well before that: “Both of my parents are singers so it was very much instilled in me at an early age, but I didn’t get into playing guitar until a bit later.”

“My grandpa gave me an acoustic guitar when I was a lot younger, probably in elementary school, but I started playing guitar avidly when I was 13,” he adds.  “A couple of days before my thirteenth birthday he got me a cherry red Squier Stratocaster. Having an electric guitar was what made me really get into playing because now I could play along to all the rock music I listened to.”

Peo also plays bass, piano and a little harmonica, and is a songwriter.

Perchance it was genetic fate. His grandfather is respected bandleader and guitarist Steve Creech, who plays jazz standards and blues in local venues. His mother, Stephanie Peo, is choral director at J.H. Rose High School and E.B. Aycock Middle School.

While he describes his style as “country or pop-country,” listeners should not expect beer-and-pickup-truck twang popular on contemporary country radio. Think Marty Robbins and Roy Orbison. His vocals have a cultivated quality and a range that isn’t happenstance. And he can whistle. On demand, in front of an audience.

He cites a wide range of influences from punk and new wave bands to country artists and singer-songwriters like Nick Cave and Tom Waits. One of his favorite songs to perform due to enthusiastic audience response is “Ghost Riders in the Sky.” On any given night, one might catch him singing “Desperado,” “Devil in Disguise,” or “Ziggy Stardust.”

After the chord progression comes the melody. “I will go back and forth between my guitar and piano until I’ve got something I’m satisfied with and the lyrics come last.”

He explains that inspiration often comes after listening to a song by someone that influences him or immediately after finishing a different song.

Even though a performance can appear effortless, the preparation is anything but.

“At my peak, I used to practice guitar for four or more hours a day,” he explains. “Now I spend closer to two hours a day practicing my playing and singing. It’s something I do every day.”

What are his aspirations? Peo says he is exploring colleges in Nashville.

“I would love to turn this into a successful career for myself,” he says. “Something that I really aspire to is playing at the Grammys someday. Not even necessarily winning but just playing on stage there because the artists there always give such lively performances. More than anything, I’d just like a platform to feel creatively fulfilled and share it with the world.”

Peo will be taking a break from open mics for a while as he is rehearsing for the role of the villainous Jafar in Aladdin at J.H. Rose High School. Show dates will be November 18-20.

Perhaps it’s appropriate to quote Jafar: “You’re only a fool if you give up, boy.”