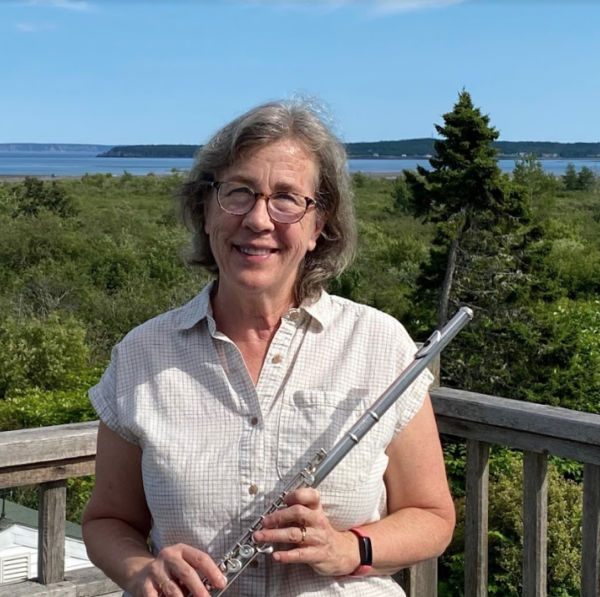 What do you get when you cross a botanist with a flutist?

It sounds like an interesting riddle. And maybe the punchline would be “flowery music.” But it’s no joke. East Carolina University biologist Carol Goodwillie was actually recruited to play in a band during her biologist interview.

Growing up in New England, Goodwillie trained as a classical flutist before switching gears and going back to earn undergraduate and graduate degrees in biology. But happily, she has found ways to enjoy both disciplines, and places where her interests can meet in the middle.

While she started playing the flute in the fourth grade, she stopped practicing after a couple of years and “gave it a rest.” As a freshman in high school, she joined the band. “That’s when my interest really sparked. My playing took off and I got serious about it,” she said.

On flute, she especially loves to play “Syrinx” by Debussy and the solo flute sonata in A minor by C.P.E Bach, one of J.S. Bach’s sons.

Goodwillie completed an undergraduate degree in flute performance at the Oberlin Conservatory. “I just barely squeaked in on the waiting list,” she said. “A few years after graduation, I realized that, as much as I loved music, it wasn’t the right choice for me for a profession. I had become concerned about the environment, had always loved plants and nature, and decided to study biology and try to make a contribution in that area. So I went back and did four more undergrad years in biology, then grad school.”

Job opportunities both for her and her husband on faculty at East Carolina University brought them to Greenville in 2000. “One of the things that attracted me to ECU from the start was the possibility of staying connected with music. Roger Rulifson (guitarist in Elderberry Jam and fisheries biologist in the department) recruited me for Elderberry Jam during my job interview! And poet-biologist colleague Hal Daniel, who passed away not long ago, intrigued me with his talk of connecting arts and science,” she said. “Eastern North Carolina was all new to me, but I soon fell in love with the local flora–I’m a botanist–and the people.” Elderberry Jam played old time fiddle tunes, jigs, and reels for contradances in Greenville and the surrounding area. The group, which played for several decades, included Roger Rulifson on guitar, Gayle Rulifson on piano, Carol Goodwillie on flute, and Jim Watson playing the fiddle melody part on accordion. Clogger and folklorist author/editor Leanne Smith also played fiddle with them for a while.

“I had done a lot of contra dancing in New England and loved being on the other side of it, providing the music for the dancers,” she said. “It was a whole new kind of musical experience for me. You play each set of songs over and over until the dance is done, so you end up trying out harmonies, playing in different octaves and styles as you go. I hadn’t done any improvisation as a classical musician so this was a fun stretch. And it was a mental and physical workout!”

Goodwillie also found an outlet for her music in the Greenville Choral Society, singing for the past several years and recently completing a term as president. Her favorite song to perform with the Choral Society is Mozart’s Requiem. “I also love singing more informal music at our annual galas …Pirates of Penzance, old show tunes, songs from Disney movies.”

But the notion of merging arts and science is something she has been working on in a few projects with other faculty at ECU: “First, I did a project with Patch Clark in ECU Theatre where biology and theatre undergrads got together to write and perform a play about trees for children”

Unfortunately, COVID came in just as rehearsals began, so they recorded the play and distributed it to kids learning at home.

“That inspired us to go broader and also bring in dance, music, and visual arts at ECU in another online project for kids about tree biology,” Goodwillie explained. “This past spring, I collaborated with textile artist Gabe Duggan at ECU to teach an honors course on weeds, considering them from different perspectives. For example, we looked at the cultural, artistic and biological significance of plant fibers, and used drawing and art to help students observe and learn about plant structures. The students designed art installations that dealt with themes of invasiveness making connections between exotic plants and human immigration.”

It’s possible that weeds have never been quite so eloquently explored. And as far as bringing awareness to the importance of the arts in science education, one could certainly say Carol Goodwillie has lived up to her name and has been instrumental in developing goodwill.