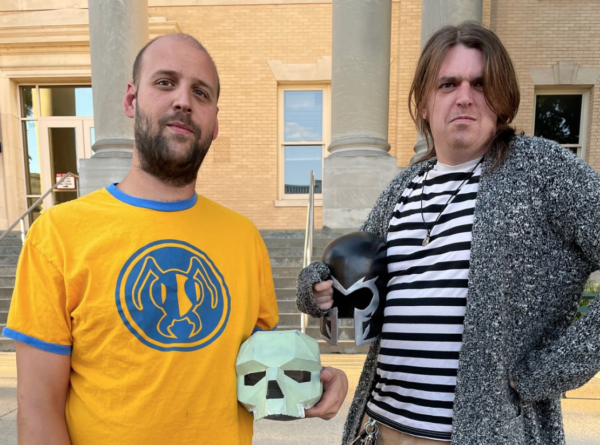 The Paper Skulls is a local band comprised of Greenville native Parker Millar, and Nick Webster, who moved to eastern North Carolina from the Piedmont to attend East Carolina University. But they have connections abroad: they “send and receive signals from the dark center of the universe.”

While that’s not a commonplace phenomenon in Pitt County, it all makes sense in the context of the Paper Skulls’ performance art. 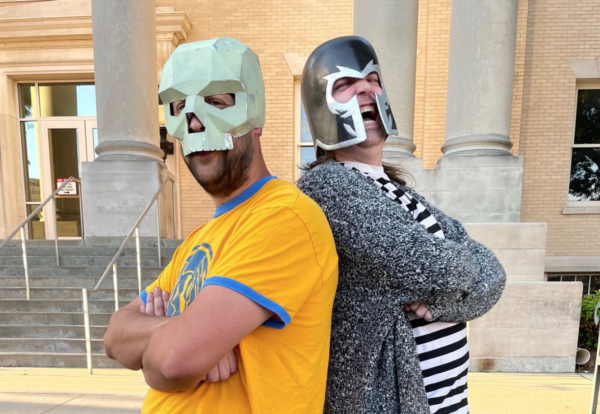 Millar’s electric guitar transforms him into a masked Magnet Man while Nick Webster on synthesizer is the Paper Skull. He even wears one, a paper skull mask, that is. An ECU art graduate, Webster constructs the masks himself.

Between songs during a recent performance at the State Theater, Magnet Man thanked the audience for allowing them to continue their mission of world domination.

While it’s difficult to describe their music style in mere words, Harvey Estes, local cruciverbalist, columnist, and musician who has jammed with Millar at some open mics, gives it a good try:

If you’ve ever been caught in the rain, but you enjoyed it, you wanted it–like Gene Kelly performing ‘Singing in the Rain’–and you welcomed each drop and you drank it all up and wanted more. Remember it, and imagine that instead of raindrops, you are bathing in a torrent of notes from an electric guitar. And it makes your mind dance and celebrate the madness, as if your body had found the Gene Kelly gene where the DNA for music and dance is stored–
That’s half of what it’s like to listen to a performance of Paper Skulls. And in addition to Parker Millar hosing you down with an electric guitar, the rainstorm will be punctuated by a delightfully random harmony of musical and nonmusical sounds from Nick Webster on the synthesizer. Some of it will be notes on a keyboard, some will sound like a car crash. Sometimes it will catch you by surprise so that you actually look out the window into the streets to see if there has been an accident. But with the Paper Skulls, nothing is accidental or planned, everything collides in a dimension where deliberate and random are
meaningless words.

Webster explains that most of their shows are improv: “I like to think of it as evil synthesized jazz rock. The music finds us and takes where we want to go. That gives us the freedom to explore and not be held down by a set list, even though we play selections that we like, or we will use the same root beat to see where we can take it.” 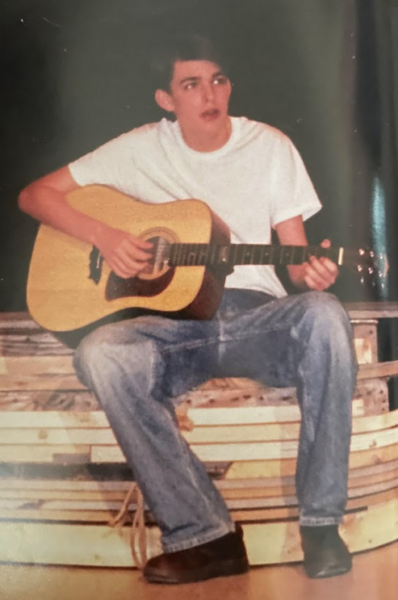 When asked to elaborate about the sending and receiving of signals, Millar explains, “There is a gravitational center to the universe that everything spirals into. So if you feel like you’ve got no direction, galactic north is where we’re all headed.”

If that does not illuminate adequately, he adds, “Nick and I are developing Paper Skulls as a performance act with characters. Kind of like GWAR.” The group, “GWAR” that Millar references is a heavy metal band out of Virginia, but Millar explains Paper Skulls is comparable in the sense of the theatrics, but musically they are more mellow. The music might have a mellow vibe, but the characters “play music to make money to build a death ray for the purposes of world domination.”

The State Theater show on May 8th was a new experience for Webster. “The show at the State Theater was amazing,” he says. “Parker has played a lot of shows but this was my first show with my first band. It was everything I hoped it would be even though it was absolutely terrifying for me.” 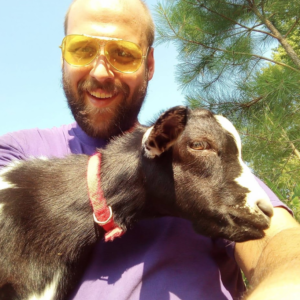 Nick Webster and his goat

Under the elaborate cover, at the heart of the matter is the music. It may not be what the ordinary person expects, but it is nothing if not extraordinary. While often it includes an instrumental stream of consciousness as described by Estes, in the State Theater performance Millar introduces their final number as a “campfire song” encouraging others to sing along. Millar’s guitar is strummed and he reveals that Magnet Man has quite a good voice under that mask.

But even when the masks are removed, the music goes on, often in another form altogether. Millar also plays rhythm guitar in The New Aquarians, a four piece rock band. When he’s not planning performances with Paper Skulls, Webster works with local sculptor, Jonathan Bowling.

Millar has his own record label that can be found on Bandcamp called Galactic North Records, which includes recordings from various groups he has worked with, including Fearless Freaks, the Dick Richards, Spaghetti, and the New Aquarians, and now Paper Skulls. He’s also working on a vinyl release of the band Vstlty’s album.

Millar and Webster are active at local open mics, such as at Molly’s Community Cafe, and they host a trivia night there. “The trivia show is where we really get to work on our schtick and have fun,” Webster says.

Originally published in the Daily Reflector May 22, 2021