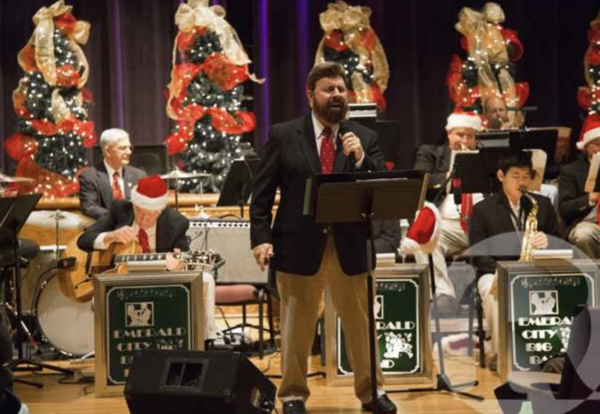 Sounds of the Season for over 30 Years

Emerald City Big Band Plays the Colors of the Season

‘Tis the season for red holly berries, Santa’s white beard and green pine branches. The brown of a wooden manger and the gold of a certain star. And nothing conjures the colorful sounds of the season more than the Emerald City Big Band. The ensemble of musicians with featured vocalists will be presenting their annual Christmas concert on December 17 at Jarvis United Methodist Church Taft Christian Life Center.

The band, founded by Michael Stephenson, will present a program of holiday instrumental  favorites with vocals by Emery Davis and RaSheeda Waddell.

This year’s concert has the feel of the Christmas favorite film It’s a Wonderful Life, where a community discovers heightened enjoyment in the return to seasonal traditions.

“In order to keep our audience and ECBB members safe, we chose to cancel the concert last year due to COVID,” Stephenson explained. “This was a very difficult decision but we felt it necessary. We are so excited about bringing the happy sounds of the Christmas Season to the Greenville Community once again. Even though we celebrated Christmas with our families last year, it just did not feel complete. Being able to share music with your community helps us connect with the love of this season.”

Waddell seconded Stephenson’s sentiment about performing the Christmas concert again: “Artists and cultural storytellers have really struggled during the pandemic. We are happy to not only be making music again for the sake of personal gratification, but most importantly we are happy to give people something many of us haven’t had in a long while…joy.”

The band includes 19 musicians: 5 saxophones, 4 trombones, 4 trumpets, 4 rhythm section members, and 2 singers. Their relaxed delivery allows them to forge a special connection with the audience, sharing their love for the music of the season.

“I especially always hope to have the chance to sing ‘Have Yourself A Merry Little Christmas’,” Davis said. “But I honestly enjoy all the traditional Christmas standards as well as the hymns and religious songs of the season. My goal is to deliver the jazz standards of the Great American Songbook.”

Davis conjures up the vocal stylings of timeless performers like Crosby, Sinatra, and Cole. He is intentional with phrasing and breath control to deliver the melody and lyrics as the songs were originally intended to be performed.

“I just hope I can do justice to the great songs and vocalists of another era,” he said.

Davis said he has been singing for 61 years and during that time has only sung with recording backing tracks 2 or 3 times: “The interaction with live musicians is the greatest part of the experience.” 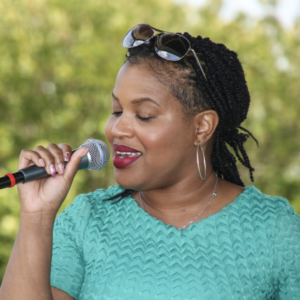 Waddell will be performing “Everybody’s Waiting For The Man With The Bag,” “Santa Baby,” and a unique arrangement of “O Holy Night.”

She has been performing and serving the community with ECBB for almost 10 years. “Their dedication to the preservation of good music, arts advocacy, and involvement in eastern North Carolina is bar none, “ she said. “I am always amazed that I get to perform with a group of such fine musicians and am glad to be reunited with them in person.”

“‘Santa Claus is Coming to Town’ is always a crowd favorite,” Stephenson said. “Until his untimely death, this song was usually sung by former member Ed Wheatley. Since his death, I have sung the song. This year it will be sung by Emery Davis in celebration of his grandchildren in the audience.”

Wheatley, who died in 2018, performed with several bands in Greenville, including the Emerald City Big Band, the Tommy Smith Band, Tupelo Blues Band, his trio Sentimental Journey, and the Tar River Community Concert Band, whic he also served as a board member and president.

Over the years, the Emerald City Big Band has performed the annual Christmas concert in several locations. The very first concert was in the Ayden Performing Arts Center because they were rehearsing at that facility. When rehearsals were moved to Cypress Glen, the band presented several concerts in the Cypress Glen auditorium. 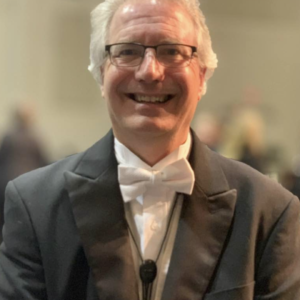 “When the Music Academy of Eastern Carolina opened their facility at Red Banks Road, we performed there,” Stephenson said. “When the audience outgrew that space, we moved it to St. James Church. This will be our third concert in the Taft Christian Life Center at Jarvis Memorial.”

A $10 adult donation is requested at the door with youth/students free. Proceeds will support the East Carolina University Ed Wheatley Jazz Trumpet Scholarship Endowment and The Music Academy of Eastern Carolina.

Originally published in the Daily Reflector on December 18, 2021.