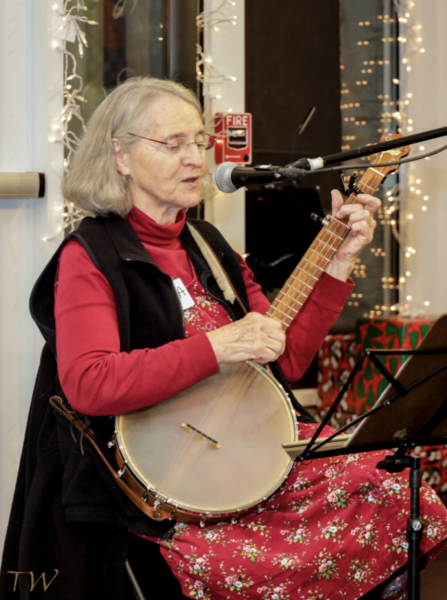 “It’s a hoedown, not a showdown”

“It’s a hoedown, not a showdown”: Linda Boyer shares love of music with community

The Christmas season will always be special for Washington native Linda Boyer, for many reasons, but one in particular still stands out: For Christmas in 1981 her husband gave her a banjo. “I was pregnant with my son,” she recalls, “and I couldn’t even put it over my fat belly. I had played guitar and ukulele and other instruments, but when I got the banjo, it was really magic.” 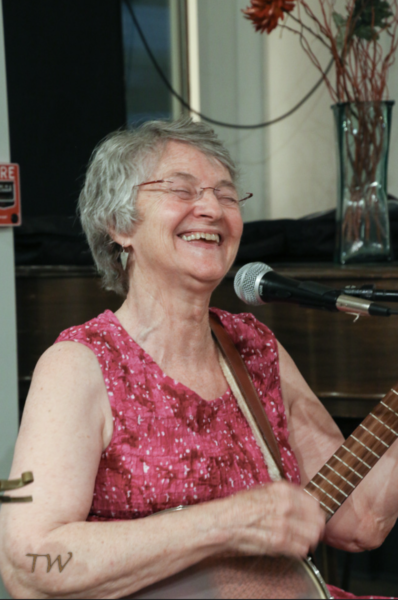 Music has been an important part of Boyer’s life for as long as she can remember: “I was always a singing child–and I drove my brother crazy. We had a rule when I was very young that I couldn’t sing at the table, but I could sing anywhere else. I just always loved music.”

She sang with her parents in church, sang nursery rhymes–any songs that came along, she would “latch on to them.”

Boyer got a baritone ukulele in high school and was friends with a lot of girls who liked to sing and play instruments. “This was the 60s when all the folk songs were coming along so we had a good time playing together,” she says.

Born in Washington, NC, she’s lived most of her life there except when she went to college and during the time her husband was in the Air Force. She attended Meredith and then East Carolina University, earning a BFA in ceramics and art history. She and her husband moved back to Washington in 1981–the year of the banjo.

“I’ve always liked the sound of a banjo. It has a good happy sound,” she says. “It’s a very clear, distinctive sound. It sounds so much different than a guitar. It has a nice narrow neck, and I’ve got kind of small hands, so it’s an easier instrument to play.”

She started playing old time music about 10 years ago and Boyer said that style of music is perfect for clawhammer banjo. She learned clawhammer banjo from Karen Modlin. Boyer had heard her play and enjoyed her style so much that she called her up and asked her if she would teach her. She took lessons for about a year.

“Clawhammer style is different from a bluegrass/Earl Scruggs style,” Boyer explains. “My banjo is an open back banjo so it has a different tone than the bluegrass banjo. It’s more of a down-picking style, and bluegrass is an up-picking style. It’s older–the Scruggs style started in the 1930s–and it grew out of African music and Irish/Scottish music in the Appalachian mountains.”

One of Boyer’s greatest joys is playing music with others in the community. Rob Cuthrell, founder of the Beaufort County Traditional Music Association (BCTMA) remembers meeting her for the first time: “It was 2008, the year we got started, and she showed up at a jam on the corner of Main and Gladden Street, where we had been given permission by the city to get together on Saturday mornings to play music from 10:00-noon. She showed up with a little bitty guitar and she just had a big ol’ time and she’s been coming back ever since. She has been very involved with BCTMA, now more than ever.”

BCMTA is now in its 15th year and Boyer, its chairman, adds: “We are associated with the Arts of the Pamlico and appreciate their help, and them allowing us to play at The Turnage Theater. It has been a good cooperative effort between the two organizations.”

The group meets to jam on Thursday evenings and Saturday mornings, with 10-30 musicians participating. They play outside when the weather is nice, and in the Turnage Theater during winter. Dwayne Harris is the BCTMA co-chairman and the sound technician for shows. Sidney and Delores Moore have been members from the beginning, Boyer says, describing them as “wonderful jam musicians who have always been a great help.”

BCTMA has an active board of directors that plans special events throughout the year, including the Guitarfest and BOCO Traditional Music Festival. “In the past we had the Pamlico Opry,” Boyer adds, “which was a summer series of music, and Tar Landing jams, held at Rob Cuthrell’s barn in Bath.”

BCTMA doesn’t charge admission for events but accepts donations that go towards different charities. “We’ve contributed to Ruth House, the Humane Society, even the hurricane relief funds,” Boyer says. “BCTMA ‘s goal is to preserve traditional music. By having festivals,  shows and jams, we hope to share this uniquely American music so others can enjoy it too. And it sure is fun to play!”

Boyer is also a member of a group called the Flatland Zingers. She describes their musical style as a combination of old time, old country, and early 1920s music: “It’s an eclectic sound I guess. We just like energetic music, funny songs. We like to have a good time and like the audience to have a good time too.”

The group includes Rob Cuthrell in addition to Boyer, and Eric Holmes plays bass. Justin Casey has played with the group some. Other members come and go; when they get a gig, they gather up a group and “get some music going.”

For a BCTMA Christmas party this month, a song Boyer performed was “Breaking up Christmas,” an example of the fun she has with her music. She says, “In the olden days, people would visit around Christmastime for more than an afternoon. They would spend like a week or two weeks with family and friends, and there would be a lot of music. It would last until Old Christmas, which was January 6, and then they would say they need to break up Christmas now.”

Boyer stresses that BCTMA is very welcoming to anybody that wants to come and play: “Whether they are just starting out, whether they used to play when they were younger and have worked their whole lives and want to pick up the guitar again. I think that’s one of our strengths–we’re an encouraging group. Way back one of our members said, ‘This is a hoedown, not a showdown.’ We’re not a competition group, to see who can do the best. We just have fun–it’s just so much fun to play music with other people. It improves your playing. It sounds good. You make good friends who are interested in music also. It’s just fun. And fun is what keeps you going.”

Looking ahead, BCTMA is sponsoring a Guitarfest on January 14 and their BOCO Traditional Music Festival is scheduled in Washington for April 22. Visit bctma.org to learn more about upcoming events. 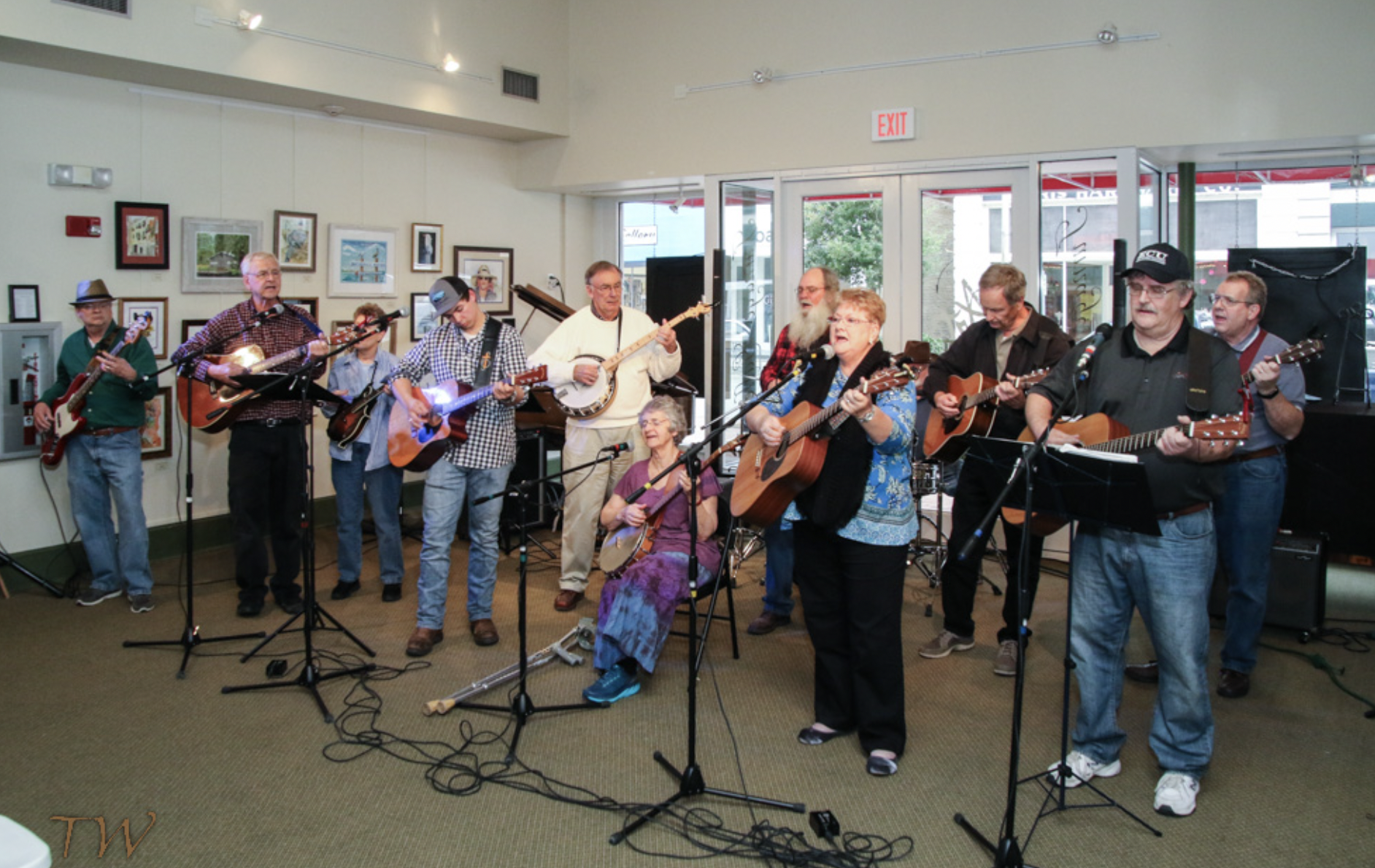