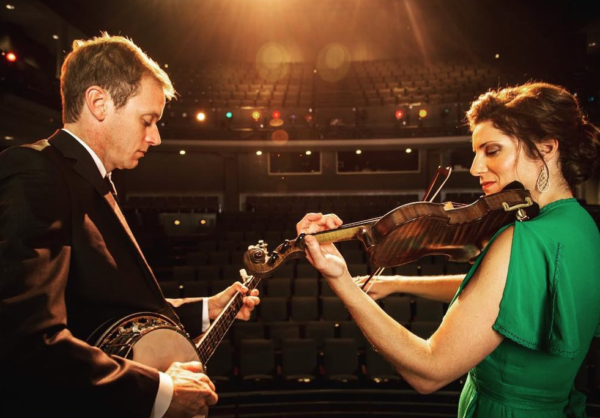 Classical and bluegrass music may seem to go together like Zsa Zsa Gabor and Hooterville in the nostalgic sitcom Green Acres. But sometimes sheer incongruity just works and you’re left saying, “Dahling, I love it.”

Hometown violinist Pattie Kinlaw and banjo player Hank Smith formed their band Hank, Pattie & the Current in 2015 and premiered at the International Bluegrass Music Association conference that same year as a new acoustic group. And “new” doesn’t merely imply “recently formed.” It means they have managed to put their own unique spin on timeless styles of music.

Smith says they jokingly call their genre of music “Classygrass” because of the classical music influence: “Many of our songs are arranged for string quartet and chamber ensemble, so we’re able to bridge the two worlds and create a wide range of emotion with the music. “

But there are some other influences evident too. Just close your eyes and Kinlaw’s voice conjures thoughts of Norah Jones. “Pattie brings a jazzier, more soulful vocal style to the group not typically heard in a string band setting,” Smith explains, “which adds a depth and richness to the songs.”

From Williamston, Kinlaw started as a Suzuki student at age four, studying in Greenville with Jon Shaw, Mamie Dixon and Joanne Bath. Dixon said that when she sees Kinlaw performing with her violin, she feels like she’s looking in a mirror.

“I knew around the age of 16 that I wanted to pursue music but I wasn’t sure in what form or capacity,” Kinlaw says. She graduated from the ECU School of Music in 2006, and then began her own private studio, along with performing. “Some of my best memories include attending the North Carolina Suzuki Institute and our annual Christmas concerts as a child,” Kinlaw says. “Also, performing with my mom and my husband.

Kinlaw’s mother is a church organist and pianist, and her husband is a bluegrass bass player. She enjoys playing with family and hopes to keep the tradition going with the recent addition to her family.

Harvey Estes remembers Kinlaw when her mother was the choir director at the United Methodist Church in Williamston. “At times I had the honor of being Pattie’s metronome, although even at six years old, she didn’t need it. At Christmas I accompanied her on some carols,” he says. “Even as a little girl she amazed us with her musicianship. I remember her playing ‘Silent Night’ one year. She had told her mom, ‘I want to play Rudolph!’ to which her mom said, ‘No, we’re in church.’”

Smith says he didn’t come from a particularly musical family or a bluegrass background. “My folks are Yankee expats that moved to Florence, S.C., when I was six-months old, so my foray into banjo was mine alone,” he says, adding. “I always thought it sounded cool and that any kind of music could be played on it, not just bluegrass.”

He started playing in high school and became influenced by different genres in college and beyond. Smith and Kinlaw met performing in a bluegrass band together and toured the circuit for years. “We like to say we met in the middle to form this new sound with many different influences,” he explains. 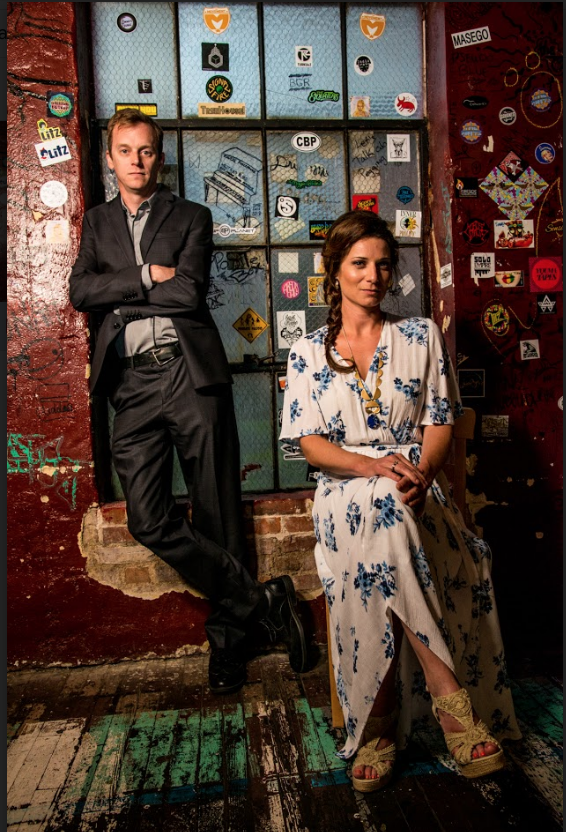 The present lineup of Hank, Pattie & The Current includes Billie Feather on guitar and Steve Martinez on bass. Feather is a Winston-Salem native now living in Durham. “She comes to the band with a wealth of music experience academically and on the road,” Smith says. She’s currently finishing up a Master’s in Music at the UNC School of the Arts.

Martinez lives in Myrtle Beach and came to the band via his involvement in the Long Bay Symphony, of which Kinlaw is also a member. He is an instructor of music at Coastal Carolina University. “It’s a powerhouse lineup and we can’t wait to get back on the road with these folks!”

Smith remembers performing at the ROMP festival in Owensboro, KY on a summer tour. “We were the last band of the night and the crowd of a thousand or so people was rabid!” he says. “They hung on our every word and sang along with the songs they knew, and even some of the songs they didn’t know. We had a blast and it was truly a night to remember.”

For Kinlaw, a performance that stands out was during the release of a live album in 2018 from Fletcher Opera Theater, inside Duke Energy Center for the Performing Arts. “We included a string quartet with our 5-piece that night and had such a great show,” she remembers.  “I think a big part of that was the audience as well. We had a lot of love from our fans that night and you can feel that from the stage.”

One of their signature original songs had a working title of “Baroque Banjo.” Smith says, “What was another way to say that? ‘Earl in Vienna.’” Smith recounts another fun story from one of their tunes entitled, “Colorado!”  “It’s such an easy-breezy melody that we like to say it’s what a Bob Ross painting sounds like.”

During the pandemic, Smith said he has been fortunate to be able to keep teaching, though remotely.  He’s also been steadily composing 24 preludes for string quartet and banjo.

Kinlaw found her own silver lining during imposed time at home. “My husband and I welcomed our newest family member in February 2020,” she said. “Our son Grady has kept me busy through the pandemic and I’ve been able to spend more time with him then I would have originally.”

Kinlaw said she has also been writing much more than usual, declaring, “I feel like there will be an artsplosion after this pandemic.”

You can find lots of their videos on their YouTube channel, and look for new material debuting in 2021.