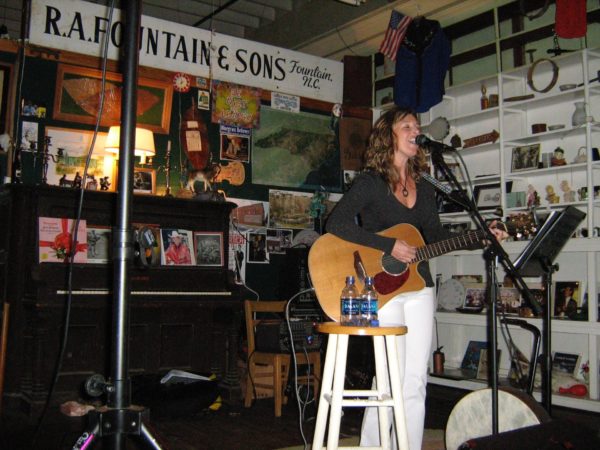 Ten Questions for Shelton, who had re-located to Brazil since her last show at RAF (an e.mail interview)

Life in Brazil for me is the same as it was in North Carolina and the other places I’ve lived in the respect that I still do the same things through out my days: exercise, vocal training, practice, writing, promotional work and so forth.

The difference comes when I leave the comfort of my home and I have to face speaking and understanding Portuguese. It is difficult to be ‘myself’ when I struggle asking a simple question like ‘do you have these shoes in red?’ (However, I have mastered all the shopping questions!) Seriously, your personality becomes different when you’re not speaking in your native language. This is something I never anticipated.

There are many differences, some good and some bad. The most obvious is the vast separation in the Brazilian class system. Brazilians have said to me that Brazil is actually two countries: the poor and the rich. Both extremes are difficult for me to digest.

2. How’s the music scene for listening?

I live in Porto Alegre, the capital of the state Rio Grande do sol. The music scene is okay. I have found some incredible players. Most of the music venues have bands that play American and British covers. When they throw in something Brazilian, they sound great! I wish that I could find more bands locally playing Brazilian music.

3. What kinds of performing opportunities have you had?

In the Celtic genre, I have performed for some of the ex-pat communities: The St. Andrew’s societies, consulates and corporate events within the American companies. I have also played some of the music venues locally in Porto Alegre with success. As much as I love to perform, my main purpose while I am there is to really absorb the culture and learn the traditional music and dances of Brazil.

I would like to note that being in Brazil has actually brought me closer to the Celtic traditional music. I will try to explain: when you are away from home, you tend to do things, eat things, and being around things of comfort. When I am away from home, I play music that comforts me, sparks warm memories and takes me to my favorite places. For me, this is Celtic music. I spent my childhood Highland dancing and attending Scottish festivals all over the US, and then I spent close to 10 years traveling back and forth between Scotland and Ireland. Now that I am in Brazil, I feel the farthest away from the Celtic culture than I have ever been. This is very hard for me and in an effort to balance my life of learning Portuguese, Brazilian music and dance, I spend much time re-visiting what I love the most, which is Celtic music and dance.

I think living in Brazil was a great decision and I am enjoying the experience. However, let it be known that I will never abandon my first love of Celtic music.

4. Any Brazilian influences starting to creep in?

YES Actually! I did not expect nor really WANT that to happen. I find myself starting to think more about the samba rhythms when I write. So complex and yet so captivating! I just love the rhythms that just make you want to dance!

I think that at every stage in a musician’s life we begin to let surroundings influence our music. Even if that change is only in the feeling or mood put into a piece, as a creative and emotional person, it is still significant. Therefore, I think it is good that I continue to let my music move to new places and change as I change.

The meat is incredible! The meat is grilled on what they call a churrasco and they only use sea salt to flavor it. The cuts are quite different from our American cuts–my favorite cut is called picanha.

In addition to the various meats, I have fallen in love with the fruits that are huge and so large in variety! I have become a huge fan of the mango fruit (or in Portuguese ‘manga’). The ‘Tommy Manga’ is my favorite and I eat at least two per day!

6. What do you miss about eastern North Carolina?

The sense of belonging. This is home and I can meet anyone in Eastern NC and know that they are not a stranger.

7. How’s your Portuguese–are you having much interaction with locals?

My Portuguese is still very basic. I cannot speak in past or future tenses, but I am pretty rocking at present tense!

Porto Alegre is a city where most do not speak English. Therefore, I have to speak Portuguese on a daily basis just to live there. Most of my friends are Brazilian, which took a lot more effort. Ex-pats tend to gravitate toward each other and I do have a large supportive group of ex-pat friends. However, I really made an effort to make Brazilian friends so that I could speak more Portuguese and have a more ‘Brazilian’ lifestyle.

8. What kinds of festivals have you been to–Mardi Gras anywhere?

I went to Carnaval in Porto Alegre one evening and had so much fun! The costumes were brilliant with bright colors and detailed work! The music was live and spectacular. Because the carnival parade of each escola de samba lasts for about 45 minutes, you have the opportunity to here the same song played over and over until the end of the parade…until the next escola de samba makes their entrance with a new song. After 45 minutes, you find yourself singing along with the words printed in the program. I plan on going to Rio for Carnival next year now that I know what to expect.

During the weeks of Carnaval, everything in Porto Alegre closed for partying! I went to Florianopolis to visit the beautiful beaches. Every day on the beach were parties, music and dancing. There was nothing formal about the partying, it just happened whenever the mood hit them. I have learned that the Brazilians love to party!

9. What should we expect in your show at RAF?

Brazilian style Partying! HA! HA! no no no!

I plan to give a concert with some behind the scenes look at what happens when recording a CD. I thought it would be kind of fun to share why songs are chosen and how it is created. I’ll perform some of the music that I chose for the new CD, and some songs that were considered but not recorded. I also plan to incorporate some sing-alongs and fun Irish music in lieu of the month of St. Patrick.

Well, I have always felt that if you are going to record any song, you have to make it your own. Most importantly, I do not apply any traditional music rules when recording an album. If I did, it would sound like every other Celtic traditional album on the market. Secondly, this CD is a collection of songs that I love and I wanted to interpret in my own way.

Musically, the album does not have expected Celtic instrumentation; rather, the songs are brought to life by musical instrumentation that best suites the melody and my voice combined. My producer of 8 years, Bob Noble, is truly the mastermind behind this idea. He has employed elements in the music that create the style of ‘easy listening’ with Celtic influences. With renowned musicians of diverse styles such as Charlie Morgan (former drummer for Elton John), Bobby O’Donovan (former fiddle/mandolin player of the Irish Rovers), Eamonn Dillon (All-Ireland Champion uillean piper), Kevin Lysen (guitar) and Sha Zhang (classical violinist for the Palm Beach pops), the music alone is remarkable.

There are so many various elements to the tracks that I feel the only reason it’s categorized as ‘Celtic’ is because most of the songs are of Celtic origin and most of the recorded musicians are of Celtic origin. I hope that everybody who purchases a copy enjoys something about it. Every time I listen to the album, I hear something else I like about it. Truly, I am very proud of this record and pleased with the outcome more than anything I have ever recorded.