Keeping up with the Jones: Meet Musician and Open Mic host Quincy Jones

With a name like “Quincy Jones,” maybe it was providence that he would become a musician. Growing up in Bailey, NC, Jones came to Greenville in 2010 to study jazz performance. And he stayed to play it–and help others find their musical mojo. 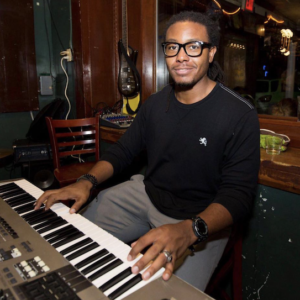 His first memories of music begin at age 4: “My grandmother would play old VHS tapes of blues and rock and roll musicians which fascinated me and made me interested in music.”

Jones’ grandparents and parents bought him guitars and a keyboard, but he said he didn’t take it seriously until his early teen years. While he is likely known most for playing the piano/keyboard, he also plays guitar and played trombone in middle school, high school, and college.

The opportunity to begin hosting open mics came after he became a part of the house band for Christy’s Europub in 2014. (Other regular members of the house band include Evan Roberson on trombone and Brandon Shamar on keys/drums .) Jones began hosting there a few years later. He also hosts open mic at Dirty Dan’s bar in Greenville.

“The most enjoyable thing about open mic,” he says, “is meeting new musicians from all different backgrounds and walks of life and playing…networking with them.”

At both places that he hosts open mic, Jones says he has an open list for people to sign up: “Not just singers or musicians but it’s open for poetry, comedy, rap and other art forms as well so you are subject to see or hear a wide variety of things at open mics that I host.”

While there have been many memorable experiences, the ones that stand out most for Jones are when someone he’s never heard or seen before comes in and “kills it” and the crowd gives them a warm response.

The advice he offers to anyone thinking about doing open mic: “Realize that everyone has to crawl before they walk. Some will be a little more seasoned than others but don’t let that discourage you from trying to put on your best performance. Nervousness is natural but with consistency and practice there should be lots of room for improvement.”

In terms of his own performances, Jones is known for his versatility. And that means everything from funk and hip hop to the Great American Songbook jazz standards: “My personal style does differ from the bands that I play with. I do a mixture of jazz mixed with covers, some of which I sing and certain songs I do instrumental covers.”

Often what he plays depends on the venue and audience: “For upscale restaurants where I play jazz, most of the Great American Songbook Jazz standards connect well with the crowd. For pubs and taverns and other bars, most classic cover songs work well for those audiences such as ‘Don’t Stop Believing,’ ‘My Girl,’ or ‘Sitting on the Dock of the Bay.’ Some of those places are usually open to a few originals as well.”

When it comes to writing original music, Jones says he usually comes up with a melody first, or series of chords: “It depends on the day as far as whether the music or the lyrics come first. I’ve had days where each has come before the other. Usually life experiences are my inspiration. I’ve only written one song in one whole sitting-=-the rest have evolved over time.”

“In and Out” is an original that he wrote, produced, and sings, and is being released on streaming platforms May 7: “The premise of the song talks about going in and out of a relationship. The inspiration came from life experiences of my own and other things that I saw in the media at the time that I wrote it.”

Jones plays many genres including jazz, pop, funk, r&b, hop-hop, country and rock. In addition to performing solo, he plays in a cover band called the Monterio Experience, and freelance jazz gigs with different musicians from the area, such as Jessica Hudson. A venue in South Carolina described the Monterio Experience like this: “These guys are from out of town, but when they come through you know it will be a party, playing hip/hop, r&b and everything in between. You don’t wanna miss these guys.”

Area open mics:
Christy’s Europub open mic, the first Tuesday of each month from 7:30 to 11 pm. 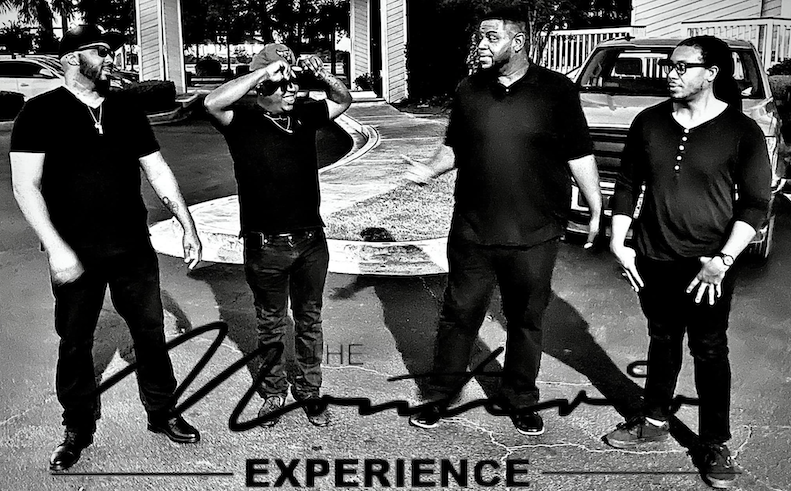