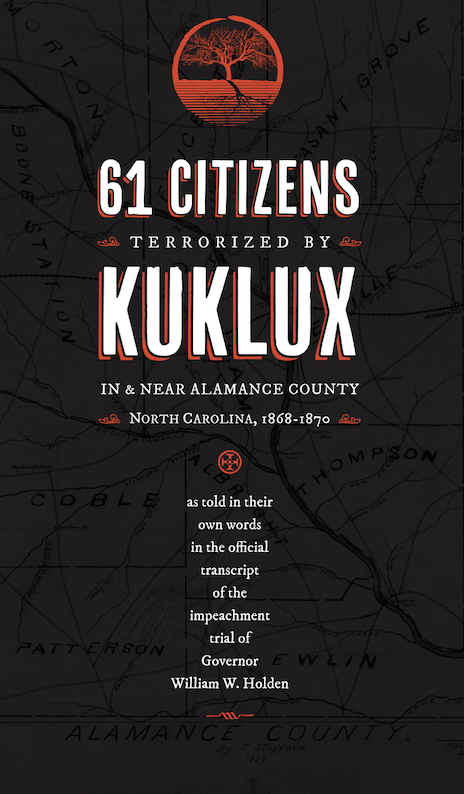 61 Citizens Terrorized by Kuklux in & near Alamance County is available until May 21 at pre-pub sale price of $12.08. Official publication at Greensboro Bound Literary Festival, May 20-22.

R.A. Fountain is also distributor of more than 20 titles originally published by North Carolina Wesleyan College Press and individuals associated with that press.

Founded in 2010 by Alex Albright in the eastern North Carolina town of Fountain, RAF is a member of the Independent Book Publishers Association.

Emily Herring Wilson’s “When I Go Back to My Home Country”: A Remembrance of Archie Ammons (2019) and The Mule Poems of A.R. Ammons (2009) were publishing projects that evolved from The North Carolina Poems by A.R. Ammons, which Albright edited for NC Wesleyan College Press and, after it sold out and then the NC Wesleyan Press folded, for Broadstone Books. Albright’s The Forgotten First: B-1 and the Integration of the Modern Navy (2013) was a finalist for the 2014 Montaigne Medal and received a Silver Medal for “Best Interior Design” from the Independent Book Publishers Association, and a Peace History Book Award from the NC Society of Historians.