Their Grass is Blue

The Suits May Be Grey but Their Grass in Blue

Three years ago when the local, traditional bluegrass band the Old Grey Suits took the stage at the Town Common in Greenville to play for Sunday in the Park, I was left with a burning question: What’s the story behind the band’s name? I mean, they weren’t wearing suits, gray or otherwise. The Old Blue Jeans would have more aptly described them based on appearance. But now, finally, I am enlightened.

“The name of the band is a reference to a bluegrass song entitled ‘You Can Keep Your Nine Pound Hammer,’”guitarist Kevin Mills explains. “It’s a song about being in prison, wearing the same old grey prison suit day after day, and breaking rocks with a hammer.”

It was one of the earliest songs the band worked on together.  At the time, they called the song “The Old Grey Suit” and didn’t know the song had a different title. After learning the song’s actual title, it became a bit of an inside joke and mandolin player, Don Dunn, suggested they use it for the band’s name. Prison songs are a staple in most traditional music genres, and the band has a few of them in their repertoire. 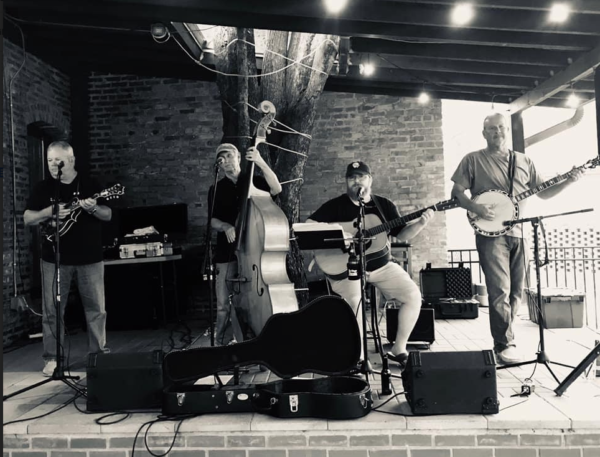 The band started at a party at Don Dunn’s house around 2003, when fiddle player Adam Child and Robbie Johnson started playing some tunes on Don’s back porch. When Don heard them he asked them to come inside and he added a guitar to the jam. That started an occasional three-piece jam. Soon after that Don started adding a mandolin on a few songs. “We actually played a few gigs as a three- piece band,” Don remembers.

When they picked up Dan Vause from a weekly picking, Don started playing mandolin regularly, and Dan took over guitar duties. It wasn’t long before they asked bassist John Booker to join their circle. Over the years changes to the band were inevitable as Adam moved away and Dan Vause became ill and passed away. Kevin Mills joined in and took over guitar duties around the end of 2011.

John Booker, originally from Blackstone, VA, now lives in Ayden and has been playing bass and guitar for over 50 years.  He is well known in the bluegrass community of North Carolina and has the nickname of “The Man of a Thousand Songs” due to his uncanny ability to remember the chords and lyrics to just about any song he has ever played.

Mandolin player and vocalist Don Dunn had been playing electric guitar in rock and country bands around eastern North Carolina since the 1970s. To hear him tell it, he was looking to semi-retire from the late night bar gigs around 2001 and was building a house at the time. When he would check on the progress of the house on the weekends he would plug-in the power which in turn powered-up the radio that filled the new house. The radio was tuned to a country station that ran a bluegrass show on the weekends. He started paying attention to the bluegrass and thought, “This is what I’ve been missing!”

The first time Robbie Johnson picked up a banjo, he  was at a friend’s house where some folks were jamming. Robbie was handed some picks and a banjo to try out. He struggled with it for a few minutes before someone pointed out that he had put the finger picks on backwards. But he got the last laugh. That was twenty years ago, and he’s still picking. He cites his biggest influences as Earl Scruggs, Bill Emerson, Sammy Shelor and [Snow Hill legend] Tim Myatt. 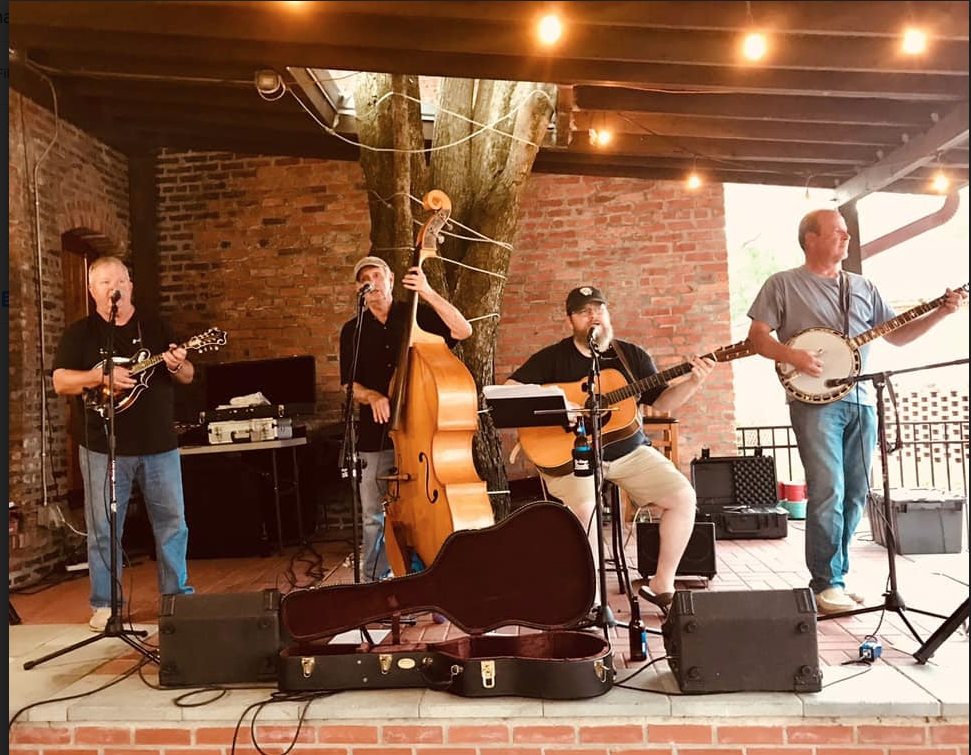 Kevin Mills has been playing guitar for nearly 30 years and has played in punk bands, metal bands, folk bands (High & Rising), and even a surf rock band (the Out of Limits). In the last two years Kevin and his wife have had a daughter and he also underwent surgery to have both of his hips replaced but, he is quick to explain, these two things were unrelated. Born and raised in Greenville, Kevin became interested in flatpicking bluegrass guitar after hearing Doc Watson perform for the first time.

Though it’s hard to narrow it down, their favorite songs to play these days are the ones where they’ve worked up three-part vocal harmonies. Examples include “Forty Years of Trouble,” “Hard Hearted Woman,” “Across the Great Divide,” and “Life’s Highway.”

How did the pandemic of 2020 affect the band? “We stopped getting together to practice for a couple of months,” Kevin explains. “Luckily, we’ve been playing so long that we were able to hop back into it fairly quickly.”

Their first gig back since the pandemic was June 19 at Plank Road Steakhouse in Farmville. “It was our first gig in several months,” Kevin said. “We had a fantastic time. Plank Road is always one of our favorite places to play.  They always have great food and awesome folks hanging around.”

Looking ahead, the Old Grey Suits are planning to play at R.A. Fountain when events can be scheduled again. To get a taste of their music, check out a recording of their 2019 performance there, “Let Me Rest at the End of My Journey,” on Fountain General Store’s YouTube channel.