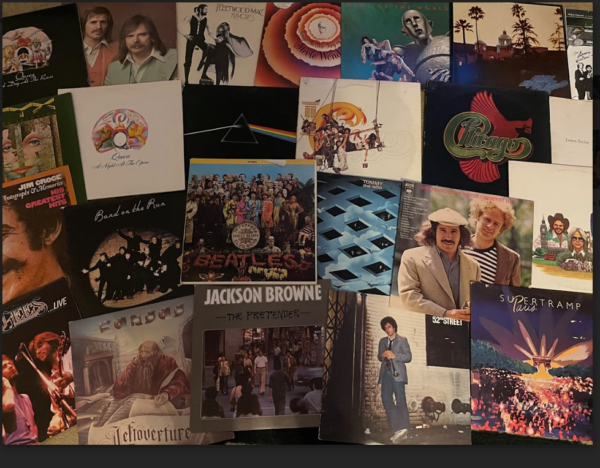 A Tribute to the Music that Plucks our Heartstrings

Love Notes: A tribute to the music that plucks our heartstrings

Maybe we’re all polyamorous. I know I am. Hallmark-hyped holiday aside, there’s one thing almost everyone can agree to love, even if we have different preferences: music. Few things cause eyes to light up and the pulse to quicken faster than to ask a question like “What is your favorite album of all time?” But who can settle on just one?

My husband, Bob-Ross-Meets-Mad-Scientist, is surprisingly decisive when asked his favorite. He answered without hesitation: Queen’s A Night at the Opera. He took one breath and then added, “And Paul McCartney and Wings’ Band on the Run.”

That’s all he willingly admits to, but I know he’s always had a thing for the Bobbys. And by that I mean Bobby Goldsboro, Bobby Vinton, and Bobby Vee. He also gravitates to death songs like “Honey”, and “Tell Laura I Love Her.” (How many times have I heard him sing every single word?) He told me years ago that the songs he wants played at his funeral are Terry Jack’s “Seasons in the Su and Peter, Paul and Mary’s “Puff the Magic Dragon.” I tried to explain the difficulty of playing songs about “wine and song” and thinly veiled references to drugs in church. He shrugged as if to say, “I guess that’s your problem because that’s what I choose.”

Bill Redding also answers without hesitation: Bob Dylan’s Blood on the Tracks, from 1975. “The songs are all good,” he explains, “great extended stories in songs from ‘Tangled Up in Blue’ to ‘Idiot Wind.’ There are lighter, lyrically clever songs like ‘You’re Gonna Make Me Lonesome When You Go’ and ‘Buckets of Rain,’ a true bluesy tune in ‘Meet Me in the Morning’ and the beautiful ‘Simple Twist Of Fate.’” He has listened to it hundreds of times, he says, without tiring of it. “As you well know, there is so, so much good music out there, but I’ve never heard an album to top this one.”

For Sue Luddeke, it’s the Beatles’ Sergeant Pepper’s Lonely Heart Clubs Band. “It was magical and I was in my senior year of high school and it was just perfect for the times ..and amazing !”

Nathan Maxwell of the nu clear twins acknowledges the question feels impossible to answer, but quickly proceeds to do just that, settling on Journey in Satchidananda by Alice Coltrane. “Music is, or has the potential to be, heart-opening medicine,” Maxwell says. “This is very important to me, and this album consistently reveals itself as such (to me).”

Anyone who has been around Redneck Guitars’ John Bradley might guess he would choose a Norman Blake album. And they would be right…Back Home in Sulphur Springs, to be exact. He also reaffirms Bill Redding’s choice, Dylan’s Blood on the Tracks. Laughing, he adds that his wife said the album title doesn’t exactly sound like Valentine’s Day material.

John Morrow calls it a “tough question,” but then, he’s used to that kind and replies with Manzanita by Tony Rice, adding, “maybe because we just lost him.”

Moonlight in Vermont with the Johnny Smith Quintet, featuring Stan Getz on sax, is Steve Creech’s favorite album of all time, released in the early 1950’s. “The LP record belonged to Dan Wooten, a  classmate who played sax in my Kinston high school band, The Hi’Fi’s,” he says. “Johnny Smith’s smooth jazz guitar rendition of the song “Moonlight in Vermont” was unlike any other guitar music I had ever heard, including the amazing Les Paul and Chet Atkins.  The first time I heard the  recording I told myself that Johnny Smith’s style of guitar playing is what I’d like to learn to play and it was the inspiration that has spurred me to play for decades.”

J.D. Joyner puts hand over heart for Carole King’s Tapestry, citing “so many well written songs on one album.”

These days Willie Nelms is living the lyrics to the song “I Love Beach Music” with his recent project, Carolina Shag: A Tribute to Beach Music. “It has allowed me to meet and network with lots of new people and share our mutual love of beach music,” he says.

“Just listened to Dylan’s Handy Dandy,” Tony Parker says. “Just keeps getting better! But then there is also the master of love songs and ballads…. Gordon Lightfoot! An Affair on 8th Avenue is absolutely purity!”

And so while abandoning the scientific method in favor of the musical, there is one artist who was mentioned more than others. We hereby declare the Bachelor in Paradise of Song to be….Bob Dylan.

From fleeting crush to lifetime commitment, at least when it comes to music we can all agree: there’s a lot to love….and it doesn’t require rushing to the drug store to buy chocolates and a card.

Originally published in the Daily Reflector on Valentine’s Day 2021