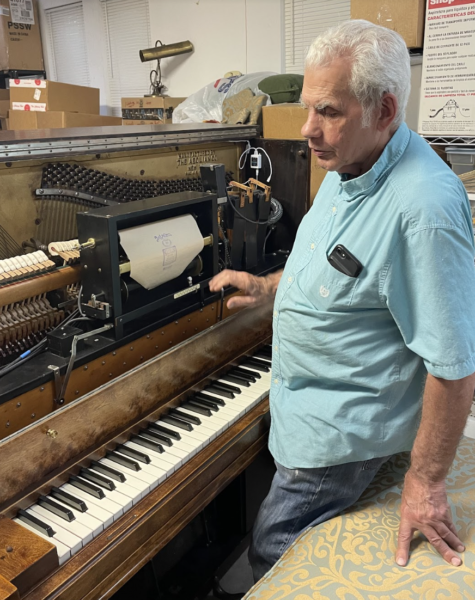 Piano Tech: Not What I Do, but What I Am

Piano Technician Don Wigent: “It isn’t what I do; it’s what I am”

If there’s a piano anchoring the living room of a home in Greenville or the surrounding area, it’s quite likely Don Wigent has had his hands on it–as well as the pianos on ECU’s campus for 34 years. A self-described “character,” he’s as memorable for his piano tuning skills as his bass singing talent in barbershop quartets. Wigent’s story began due north of here.

“I grew up in Michigan,” he said. “I went to the Michigan State School for the Blind. I went there when I was eleven. It’s a residential school, so you stay there and go home on weekends or every other weekend. Ride the bus home or something like that.”

Wigent explained that “blind schools” across the country offer specialized education for visually impaired people: “I guess that’s a fancy word for ‘blind.’ I was born with glaucoma. I could see a little tiny bit…but not a lot…colors.”

The schools offered a lot of facilities and trade training for the visually impaired not available in public schools. “So they had a real band, and shops… metal shops, wood shops…piano tuning shop.” He was in the 7th grade when he “wedged his way” into the piano tuning shop.

“When I was growing up, my dad had me doing everything,” he said. “If he was putting on a roof, I was putting on a roof. So I had pretty good working hands. But the piano shop–I just fell into the right niche. I had more fun there than anything you could imagine. That first year for Christmas I got $20 worth of piano tuning tools. That was fun. And it’s been fun ever since. I’m 77 so I’ve been working on pianos for almost 65 years.” He laughed and added, “You know, I’m gonna get pretty good one day.”

After the first two years of his piano tuning school, he started tuning pianos for people and making a little money. “Of course I was 15 years old, and what would they give a 15 year old blind kid to work on?” he said. “Junk. But I guess I fooled them because I made it work and they paid me.”

When his wife and he were engaged and she worked at Chrysler in Detroit as a secretary, he recalled, “They said to her, ‘You’re getting married and I understand your fiancé doesn’t see too well?’ She said, ‘No, he’s blind. He doesn’t see at all.’ They said ‘Really? Does he drive much?’” He laughs. “I like the ‘much’ part.”

When he was tuning pianos in Detroit public schools, a lady at the school he was working at asked him, “When you get through, where do they take you?”

“I said, who is ‘they’? They don’t come get me like I’m some sort of hospital case.”

I said, “She is nice, but I’m hoping it wasn’t a sympathy case.”

When the lady added, “And you have children?” he replied, “Yeah, I contracted it out.”

He admitted that he was “yanking her chain” a little, but explained that people really have a fear of blindness. “It’s a scary thing. It isn’t so bad for me, because I grew up with it.”

He interviewed for a position at East Carolina University in 1978 because he wanted a job where he didn’t have to take three hours of buses every day for work. “Detroit was a wonderful city, “he said. “We had free buses for blind people. I got around. I had about 100 schools to tune pianos in. Buses will get you there, but it takes time. We wanted to get somewhere that was a little smaller. We got to ECU and most of my pianos were in one building and the other two were close by. It was a great thing and I stayed there for about 34 years.”

When he interviewed for the piano technician job, he was one of 25 applicants for the position. They were advertising for a piano instructor at the same time, and there were 200 applications. “So who’s harder to replace?” he asked. “It’s a skill not many people have.”

Rudy Alexander was working in Mendenhall, at ECU, during Wigent’s tenure, scheduling performers. “I used to work with him all the time,” Wigent said. “All kinds of artists came through here. If they played the keyboard, or piano, I had to tune it for them. Being a piano technician isn’t just tuning. You have to regulate and make stuff work and repair all kinds of stuff that can go wrong. So you’ve got to be an inventive mechanic and there’s a lot to learn and to keep learning all kinds of tricks of the trade as you go.”

Wigent said it’s a misconception that piano technicians must have perfect pitch. “As a matter of fact, there are extremely few people out there who have really what you might call perfect pitch,” he said. “There are some who have relative pitch–they can tell you basically what note someone is playing. We learn to compare one pitch with another. I start with a tuning fork and it plays A, 440 vibrations per second. And from that I can play the interval notes around it and compare, and I wind up tuning all 88 notes of the piano by starting with a tuning fork. You’re learning to compare one tone with another. It’s a skill you learn. It isn’t something you pull out of your hat.”

How often does a piano need to be tuned? Once a year is usually fine, Wigent said. “If you’re a concert pianist or a serious pianist you may want to do it twice or maybe even three times a year. But for the most part, they stay pretty well–pianos are not that fragile. It’s humidity that goes up and down that causes them to expand and contract a little bit and go out of tune. When you go from Virginia to North Carolina, I think the humidity cranks up about 25 points. In a concert situation like ECU, I checked that piano two or three times a week. They had 5 concert grands and all kinds of other ones in different studios and performance areas.”

Technology has impacted the industry some. “Science and measurements have gotten really good over the years,” Wigent said. “Glues and some materials have gotten better. Electronic keyboards are getting really good. They sound whiz-bang better than they used to.” But in his opinion, they don’t take the place of a good acoustic piano and don’t last as long. “Acoustic pianos are good for 100 years if they are even moderately taken care of.”

Wigent plays the piano “enough to have fun” and also began playing the accordion when he was 8 or 10 years old. “That’s what it’s all about. If it wasn’t fun, why would anybody do it?”

Another hobby Wigent enjoys for the fun of it is singing barbershop quartet style. “I always liked listening to barbershop in Detroit,growing up there,” he said, “but I somehow never connected up with the right groups. When I left there and came to Greenville, I met somebody in Kroger’s, and we got to talking, like what’s your hobby, and I said I always wanted to sing in a barbershop quartet. He picked me up the next Monday night and I’ve been singing in it for 40 years.”

For the last few years the local barbershop chorus has been called the Carolina Chord Connection, a chapter of the Barbershop Harmony Society, led by Stephen Brand. “They used to be called ‘The Pamlico Sound,’ Wigent said, “which I think was a really pretty good name. Barbershop is four part harmony. Bass, baritone, lead, tenor.” He sings the words, getting incrementally higher with each one. “When you put four parts together, they make chords. So barbershoppers…we just like to sing, and it’s not so important if anyone’s listening because we have too much fun just singing.”

Wigent describes barbershoppers as clever, fun-loving people: “They like all kinds of funny names for their quartets. I’m currently singing in a quartet called ‘Out of Sight, Out of Mind.’ I used to sing in one called ‘The Usual Suspects.’ We got that name from ‘Casablanca.’ And there was ‘Meta4.’ The funniest one was ‘University Pest Control.’ They’re not usually retiring souls that don’t like people. They are outgoing people. Their idea of a good time is pizza and beer and singing until 1:00 in the morning.”

Blindness, Wigent explained, is basically inconvenient: “It doesn’t destroy your life. My life is probably smaller than some other people who can see. It doesn’t mean I don’t have one. I’ve got to play with the deck I’m given. I can’t say, ‘I don’t have everything, so I’m going to give up.’ You do what you can. Right?”

Wigent is quick to credit his wife, Carol, for her support through the years. His face beamed with pride at the mention of their three sons, all who earned degrees from ECU and still reside locally.

His philosophy is simple: “The doers have all the fun.” And he’s still doing it. “I’m doing it for the grandkids of people I used to tune for. Pianos will go from this family to the kids, to their kids.”

“I fell into a really wonderful thing,” he added, “and it’s still lots of fun. I enjoy the work and I enjoy the people. You meet all kinds of characters–of course I are one too.”