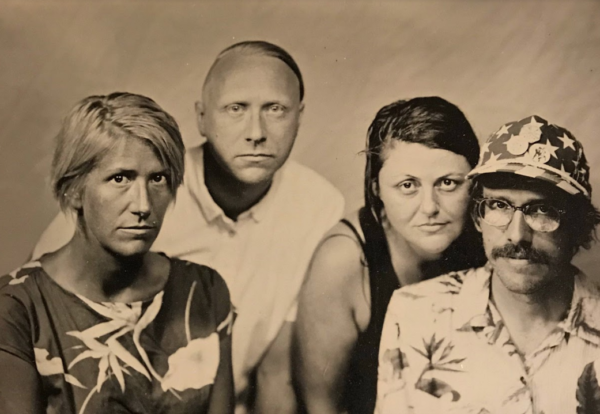 Perhaps the highest compliment a songwriter can receive is for a listener to experience the lyric. And that’s exactly what happened.

In the hard dark of pre-dawn running, our rhythmic footfalls came to a stunned stop. Through the sorcery of streetlights gleaming across pavement like stretched canvas, we found ourselves staring at mystic silhouettes of tree and human limbs.

“Face yourself; hug your shadow.”

The lyrics to a nu clear twins’ song by Nathan Maxwell came flooding back, captioning the transient artistry of contrasts. It was a vivid example of how the band’s distinctive lyrics, haunting sibling harmonies, and soaring acoustic instrumentals seep into the spirit, resonating and releasing at unexpected times.

Any day now another memorable nu clear twins’ song lyric may strike in the middle of a Zoom meeting: “With different degrees of lucidity, do we see what fools we be?”

The band hailing from Greenville, the nu clear twins, written purposefully in an e e cummings-esque lowercase style, began in 2012. It was the artistic vision of siblings Nathan and Melody Maxwell who, in fact, are not twins. (Nathan is five years her senior.)

Nathan explains that a song, “nu clear,” (even song titles are diminutive), was born before they had decided on a name for their project, and when he added twins, “it felt right.”

“Melody is a fantastic singer (he is not mistaken about that) and she had mentioned to me that she would like to have me write a song for her to sing,” Nathan remembers. “I wrote the song ‘woman inside,’ we started working on it, and both felt that this was a musical space we wanted to explore further.”

Nathan and Megan Maxwell’s “day jobs” are at Greenville’s Sheppard Library. When I considered the number of times I visited there on official reader’s business, oblivious that I should have been asking for autographs, I felt like I’d been living under a rock. At least now I can say it was a “mom rock.”

During the pandemic, Nathan and Megan have been working together to contribute to the library’s virtual children’s programming. “Folks can tune in to our virtual storytimes by joining the Facebook group ‘Children’s Library at Sheppard Memorial Library,’” Nathan says. “We’ve written a bunch of songs for these storytimes”–which can be found on their YouTube channel.

A fun, recent example is “Pumpkin Rock,” where children learn the “pumpkin pumpkin is really somethin’” as Megan dances, Nathan strums, and they both sing, spin, and hop with engaging enthusiasm. “This has been a challenge and a wonderful experience, as well as a way to connect during these strange times,” Nathan says.

Nathan explains that he has felt the power of song throughout his life. “I remember hearing ‘Be my Baby,’ by the Ronettes on the radio when I was very young and feeling that it was magical and mysterious.” 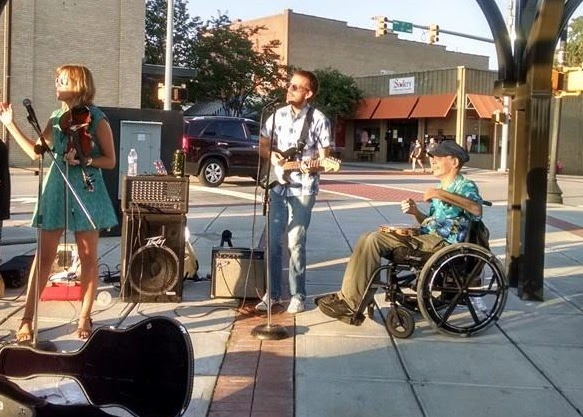 Among a substantial list of musical influences, Nathan credits “the more-than-human world…wind in trees, choirs of frogs and cicadas, rain and rivers.” He also includes local Suzuki violin teachers Jon Shaw and Joanne Bath and the unforgettable Mike Hamer.

“My parents knew Mike, so I have known him basically my whole life. He performed for an assembly at my elementary school, and I remember dancing to the music of the Lemon Sisters and the Rutabaga Brothers when I was very young.” Hamer asked Nathan to add some viola to some songs he was recording, and during that time the nu clear twins journey began. “Mike was incredibly supportive,” Nathan remembers. Many of their early performances were shared bills with Hamer.

The nu clear twins’ repertoire includes a large pool of original music, some covers, and a handful of Mike Hamer songs.

Nathan’s description of the creative process behind song-writing is fascinating. “Words often arrive first and their rhythm will suggest a melodic movement that I can approach when I pick up my guitar. Other times a tune will appear, or something will surprise me when I am noodling on the guitar, an interesting chord or progression. Once an idea popped into my head almost fully formed while I was working on a different song, but that was unusual.” He adds, “Inspiration is usually unexpected, yes, but I play and sing some almost every day, which seems important to the process.”

Looking ahead, Nathan dreams of playing at Sunday in the Park or returning to a favorite venue, R. A. Fountain General Store. The nu clear twins’ most recent album, triple birthday choir, can be found on Bandcamp. Performances at R. A. Fountain and the Whirligig are also available on YouTube.