The Piano Man meets Warren Zevon. Not the Zevon that gets fans howling at NC State games with the song that was so frequently requested that Zevon got sick of it, “Werewolves of London.” Clay Whittington channels an eclectic Zevon from the same 1978 album, Excitable Boy: “Lawyers, Guns, and Money,” and it’s currently his favorite song to perform. “But that changes every week,” he’s quick to say. But if Zevon is not your thing, Clay gives his “Quarantunes with Clay” viewers a smorgasbord of songs to choose from: Rod Stewart’s “Maggie May,” Ben Folds’ “Annie Waits,” Queen’s “Fat Bottom Girls,” “Try to Remember” from The Fantasticks, and Garth Brooks’ “Friends in Low Places.”  And at that point, he is just warming up.

He stops for a moment to take a bite of pizza: “Part of the show tonight is you getting to watch me eat.” A viewer, Amanda, comments, “Eating pizza and singing is talent!” She’s not wrong.

His viewers take advantage of the casual atmosphere to tease him about his hair. “Nice haircut, Clay” someone types. Maybe they figure he is looking like a politician, with hair suspiciously too well groomed while all the salons are closed. “I just put the #8 guard on the clippers and went to town.” he explains, adding with a smile, “Every $20 tip comes with a complimentary haircut.” 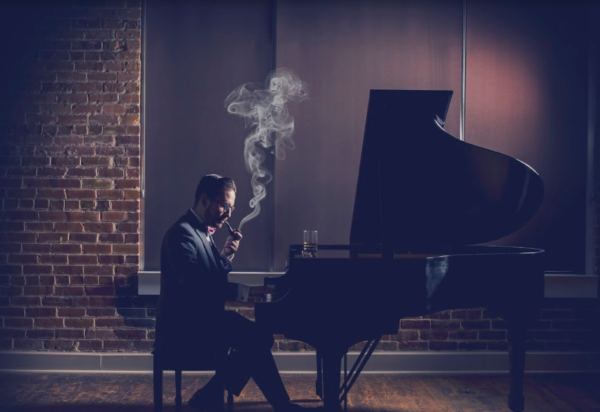 The presence of a purple and gold pirate flag as a backdrop is soon explained. “Today I started registering for classes in the fall and ECU has this class called “Aliens, Atlantis, and Archaeology”…and apparently it counts towards my degree!”

He’s back at ECU finishing a bachelor’s degree he started over a decade ago, majoring in vocal performance with a concentration in sacred music.

When asked how he would describe his musical style, he offers, “Piano rock with my own improvisational quality. My style of playing (and singing this sort of material) comes from my watching and listening to many of my rock influences.”

And the artists he names first are Eric Clapton, Ben Folds, Floyd Cramer, Elton John and Billy Joel. Billy Joel definitely makes sense, as surely Clay plays a memory or two for his audiences who are in the mood for a melody. “Putting bread in his jar” has morphed into virtual tips these days. But his shout-out to Floyd Cramer automatically has to win him points with his grandmama and everyone else’s.

If he were organizing a music festival and could invite any artists he wanted, he would choose Ben Folds, Tori Amos and Bob Dylan: “These three are amazing musicians and songwriters. Unlike so many popular artists, these three write and perform their own work, so their interpretations are completely genuine.”

But if he could sit down and chat and possibly play and sing with an artist, who would that be? “One day, when I’m long gone, I look forward to sitting down with J. S. Bach over a beer. Until that day comes, I’ll settle for Ben Folds.”

His earliest music memory: “Not wanting to return to Mrs. Horton’s house after my first piano lesson at eight years old. It’s not that I had a bad experience. It’s just that at that age, boys didn’t play piano. We played baseball. I just didn’t want anyone to know I took a piano lesson.” Thank goodness Mrs. Horton could hear a who…who had aptitude and who, thankfully, was coming back for more lessons.

Clay’s talent with instruments isn’t limited to the piano: “I played different instruments in three bands at Kinston High School; baritone in the marching band, trombone in the symphonic band, and guitar in the jazz band.” He also took up mandolin for the Kinston high school musical, Big River.

During the isolation of the pandemic, he’s still staying busy with his music. “I’m just finishing up my second semester back at ECU. This has meant score study, singing, and playing a variety of works. I have really enjoyed working on Mendelssohn’s oratorios, “Elijah” and “St. Paul,” among a variety of other sacred works by Mozart, Bach, and Bruckner.”

He’s also been live-streaming “Quarantunes with Clay” on Thursday nights at 7pm. “So far, I’ve done two themed nights. Last week was a British Invasion theme, featuring the music of the Beatles, the Who, the Rolling Stones, Herman’s Hermits and many others. A few weeks prior, I attempted a Tiger King theme with some of Joe Exotic’s ‘music.’ I’m looking forward to a Broadway, Cruise/Island and a Cuban theme in the near future…assuming we’re all still stuck inside.” 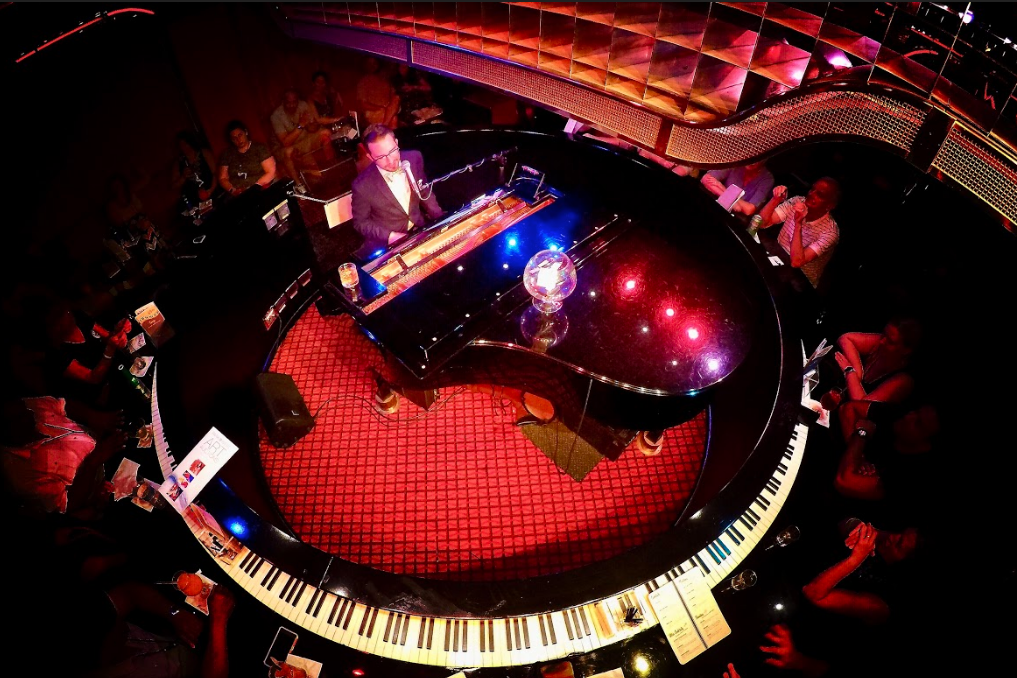 Prior to moving back to Greenville a little over a year ago, Clay spent two and a half years performing with Carnival Cruise Lines in piano bars and in mainstage shows. “My time with them took me all over the Caribbean, Hawaii, Mexico and Bermuda. I returned to Greenville after my twelfth contract aboard nine of their ships to finish my degree at ECU. Much of my audience is made of friends I met at sea and I always see many of them show up for my live stream shows and when I’m performing around the region.”

Clay describes his public piano bar performances as audience-driven and conversational. “I work the room.  I like to include people in the whole process, whether through playing their requests or getting them involved in a game. My motivation comes from seeing my audience enjoying themselves. My shows thrive on audience interaction, not just during the show, but before and after. I like to take time to learn a little bit about the people I’m entertaining.”

What’s the most unusual request he’s ever received? “I’ve received a few strange requests over the years, but the toppers are Fergie’s ‘arrangement’ of the National Anthem and ‘Come Sail Away” in the voice of Eric Cartman.”

As for post-graduation plans, “I look forward to performing, much like I have been. I’d like to further my career in the church—wherever that may lead.”

Fans can text CLAYMATES to 22828 and subscribe to Clay’s email list to receive periodic updates and notifications of shows, including the weekly Quarantunes live streams.

originally published in the Daily Reflector May 10, 2020