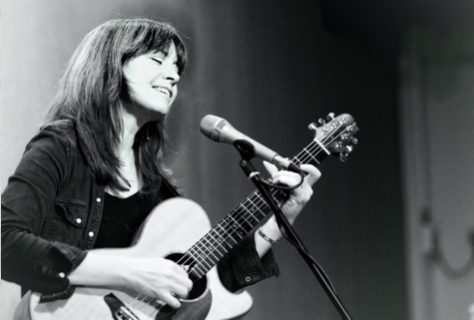 England based folk and Americana singer-songwriter Sarah McQuaid performed at R.A. Fountain on November 4, 2010. It was a beautiful concert that we got to host because of her routing.  Not just known for her lovely voice, McQuaid also plays a great number of instruments including acoustic guitar, electric guitar, piano, and drums.  She was awarded the Lifetime Achievement Award by the Ards International Guitar Festival in Newtownards, Northern Ireland in 2017.

McQuaid’s music is influenced by the places she’s lived throughout her life.  Born in Madrid and raised in Chicago, McQuaid studied abroad in France for a year before moving to Ireland for 13 years in 1994 and then to England in 2007, where she currently resides. Influences from all these musical cultures are evident in McQuaid’s original music.

The Ann Arbor Observer called Sarah McQuaid’s lyrics “thoughtful and thought-provoking”.  Her song lyrics are often inspired by her observations of everyday moments in her own life.  They also said her “smokey alto-her lowest notes are especially persuasive-invite you to lean in and listen attentively”.