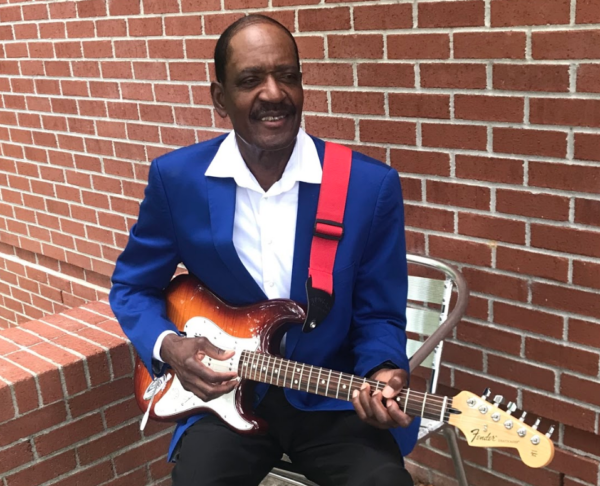 Living a Legacy of Gospel Music

Donna Davis on Roland Suggs, from the Daily Reflector

Roland Suggs is Living a Legacy of Gospel Music: “This is shouting music.”

When I first listened to Roland Suggs’ album, Jesus is Patiently Waiting, my Pentecostal upbringing resonated, and that was my first thought. The spiritual lyrics and heartfelt delivery came through, and I felt like I’d been taken to church. And not a half-hearted, soft-spoken, dry-boned church, but Church.

But when I played it again and again, I was struck with another feeling, and was momentarily uncomfortable with the apparent incongruity. If I’d had an ounce of ability in my happy feet, I’m afraid I would have been dancing. “Is it just me, “ I asked my husband, while listening on the porch, “or is this a rhythm you could shag to?”

Jesus is patiently waiting….under the boardwalk?

“I don’t think it’s coincidental that my songs have that ‘shag music’ flavor,” Roland responded, “because we grew up listening to that type of music even though we grew up singing gospel.”

On one occasion when he was singing, a little boy actually ran down the aisle and started dancing before his mother made him sit down, Roland shared. “I was so tickled I almost stopped singing.”Maybe I shouldn’t have been so surprised. Creative endeavors–art, music, writing–are inevitably a kaleidoscope of influences, and Roland Suggs certainly has a rich heritage.

He lives in Greenville now, but grew up on a farm in nearby Greene County, with 10 brothers and 2 sisters. They began singing as The Suggs Brothers when he was twelve. 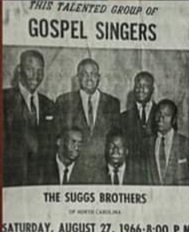 They traveled all up and down the east coast and performed on local radio stations. They opened for such legendary gospel groups as the Soul Stirrers and Clarence Fountain and the Five Blind Boys of Alabama.

Out of his siblings, six of them would sing gospel music in The Suggs Brothers at any given time, but all of his brothers–Fred, William, Edgar, Clayton, Bryant, Denmark, Ernest, Jasper, and Albert performed along with him at one time or another. When they first started, his brother Bryant was the only guitar player. But as they grew older, they added a bass guitar, alternating between two brothers.

Roland began learning guitar from his father, “but eventually we taught ourselves and learned from each other,” he explains. With the exception of the bass singer, parts were switched back and forth depending on the song, with Roland mostly singing tenor.

One memorable occasion was at a gospel festival held in Wilson at the baseball stadium. The Suggs Brothers opened for Tommy Ellison and the Five Singing Stars, who were very popular at that time. “My father knew the promoter very well and somehow, he made arrangements to have Tommy Ellison visit our home to personally meet us.  We were really thrilled and excited, thinking this was the greatest thing that had ever happened to us.”

Roland credits his father and mother, Fred and Hattie Suggs, who were both singers, as his primary musical influences. His father managed the Suggs Brothers and played guitar and harmonica. His mother sang with an all-sisters group called The Barrow Sisters.

His earliest  musical memory was when the local churches would have what they called back then a “Penny Rally.”

“Different gospel groups would take turns singing and marching around the church. Members of the congregation would march behind each group and put money on the collection table each time they went by. It was called a ‘Penny Rally’ but they would also put nickels and dimes on the table.”

The brothers went in different directions as adults, and for Roland, that meant college and the Air Force. While in the service he kept singing and playing guitar wherever he was stationed.

But in 2006 he felt impressed to begin writing original music. “The idea to write songs came when I had a lot of quiet time while employed by the Post Office.  There, I would hear God speaking to me.  He began to minister melodies and lyrics to me.”

The melody always came first, he explains. “‘Jesus Is Patiently Waiting’ was the first song He gave me.  I wrote all my lyrics and most of the music. My nephew, Dante Dixon, assisted with the music on my album.”

Roland’s “number one fan” is his wife, Hattie, who amazingly has the same first name as his mother and sister. She also wrote the words to the bridge of his song, “Amazing God.”

His favorite song to perform these days is “God’s Grace” by Rev. Luther Barnes. “It has a beautiful melody and powerful words and it is the people’s favorite.”

Like other musicians, the pandemic put a halt to much of his ministering. “Most of my singing now is at home, in the car, or at my church, New Life Outreach Center in Snow Hill.”

As for the pandemic, many of us would agree that we’re singing a song about impatiently waiting for it to come to an end.