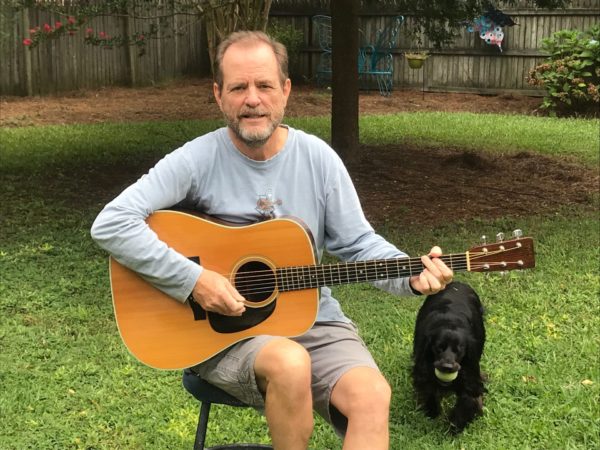 Dr. John Morrow is no stranger in these parts: he served as Pitt County Health Director from 1997 until his retirement last year. But it may be less known that when he’s not practicing medicine, he’s practicing his guitar.

“Music has been a huge part of my life,” he explains. “Whenever I get together with friends and family, playing music is part of that experience.  I play music to relax but also enjoy the mental challenge that it provides me.”

He has played guitar for 50 years, but says he has much left to learn about the instrument and about music theory and composition. “It is a great break from medicine that I can do for 10 minutes or 10 days. I have never gotten bored by it.”

Morrow grew up in Chapel Hill and Greensboro, the youngest of 6 children. His father was a surgeon in the Navy and served in WWII and Korea. His mother, a pediatrician and an early musical inspiration, is 99 years old.

“I got my first job around 9 years old and did various jobs from traveling with a carnival to being an orderly/EMT in a hospital,” Morrow recalls. 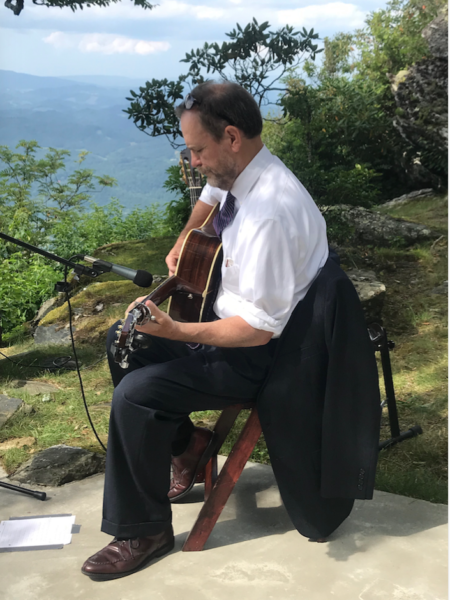 In college he studied biology, nutrition, public health and finally, medicine, and earned a degree in each.  He finished ECU School of Medicine in 1985.

After a residency and working in medicine for several years, marrying, and starting a family, Morrow moved back to Pitt County in 1997, where he served as Health Director until last year. But he didn’t take it easy in retirement for long. “I was recently hired by the NC Department of Health and Human Services to help coordinate COVID-19 efforts for particularly highly impacted counties in the east,” he explains.

Morrow describes one of his earliest childhood memories as laying on his back on the floor underneath his mother’s baby grand piano, listening to his mother, a child of the 1920’s, play in the evenings: “I was fascinated by the movement of the pedals and soft hammers and the vibrations of the strings and wood. She played Gershwin, Erroll Gardner and other jazz greats blending the unique tunes and chords with her own style.  I would often fall asleep under that piano as my mother played a lullaby.”

His mother was a very busy pediatrician with six children and a sick husband, he now realizes. “I think one of her only respites was the piano. The joy I watched in my mother as she played I know influenced mine and my siblings’ love for music from a very early age.”

Morrow participated in orchestra and band in public schools, playing violin initially, and then saxophone until he reached high school. His older brother introduced him to guitar at about age 13 and taught him how to play pop songs by musicians like Cat Stevens, Bob Dylan, Simon and Garfunkel, and The Beatles. He also took him to his first bluegrass festivals. By then his brother was a student at ECU where he played in a bluegrass band and was a member of the original Green Grass Cloggers. “Once I met bluegrass and heard the Circle album, I was hooked,” Morrow remembers. He and two friends formed a band in high school with just two guitars and a banjo and three-part harmonies.

Morrow has been going to the Galax Fiddlers Convention each year since around 1974 and participates in guitar competitions and jam sessions there. These days when he plays solo, Morrow enjoys songs by artists like James Taylor or Gordon Lightfoot. When he plays with others, he gravitates to bluegrass. “Bluegrass to me is much like jazz in that it allows more instrument expression, but it also has the harmony singing that I really love to do.”

For the last few years he’s played for his church with his friend Gerald McGowan, who plays mandolin. He has performed for weddings and funerals over the years and at parties with bands. “I miss playing in our Wednesday evening group that included Gerald on mandolin, Brad Brechtelsbauer on bass, Will Ball on guitar, and two former Daily Reflector employees, Al Clark on banjo and Mark Rutledge on guitar.  We would meet after work in the room called ‘The Morgue’ so we called ourselves ‘The Morgue Band.’”

Morrow names his four daughters, now grown, as his proudest accomplishment. He also enjoys various hobbies like auto mechanics and sailing. “My wife, Suzanne, and I bought an old boat and have cruised the coastal waters from Canada to the Florida Keys.”

And that’s where they were when the pandemic first started…on their boat in Florida. 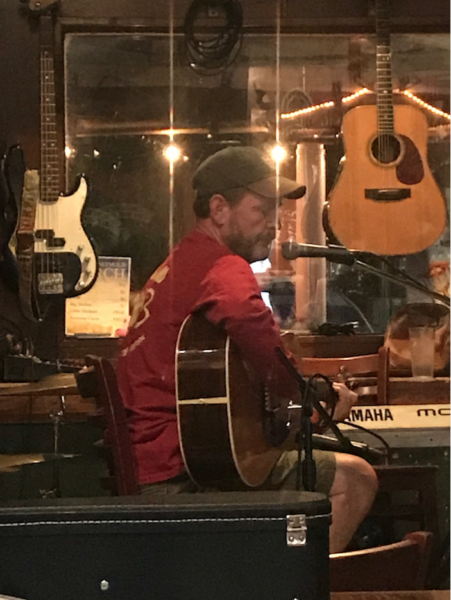 “We were visiting the many coastal towns enjoying the live entertainment at local restaurants and bars.  I had my guitar and would perform at an ‘open mic’ occasionally.” When the pandemic spread, they headed back home to Greenville. “The pandemic has allowed me to focus more on music just because of being home more, although starting my recent job has significantly interfered with my practice time.”

As both a public health professional and musician, Morrow has empathy for musicians whose livelihoods have been so impacted. “The internet has really revolutionized entertainment and just in time as much of the ‘live’ performances today have to be virtual. I’m encouraged, though, by the creative ways I see musicians getting their music out while still following the public health guidelines.”