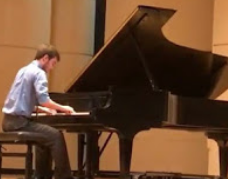 Music Is Good in Theory and Practice

For Evan Martschenko, Music is good in theory and practice

In a small, brick Robersonville church that conjures the charm from Jan Karon’s fictional town of Mitford, ECU music theory major Evan Martschenko settles himself onto the piano bench. He’s ensconced in a sanctuary that has a painting of Jesus on the wall behind the pulpit, and a “This Do in Remembrance of Me” communion table in front of it. On the right back wall is a wooden board displaying the hymn numbers that will be sung during the service.

Only one wardrobe accessory stands out to interrupt the nostalgic, intimate atmosphere: a black, cloth face mask. His entire dialog and even subsequent songs will be delivered behind the badge of the times we live in.

Accompanying himself on the piano, his voice rings out in a rich baritone, the sort that is born of natural ability, refined by formal training. Close your eyes, and it’s a vocal quality that you can imagine hearing just as easily in a Broadway musical. 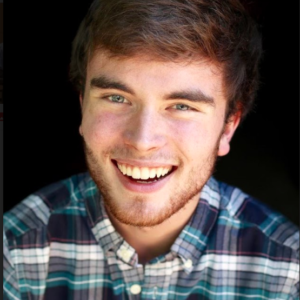 Martschenko is from Cary but moved to Greenville to attend ECU in 2018. He serves as the music director at Gold Point Christian Church. Each Sunday he performs a special musical number (most are posted on the church Facebook page) but says that is not what he looks forward to most. “Singing the hymns with our congregation will always be my favorite part of any service,” he explains. “Even if I push the congregation to sing some hymns they may not know, I truly believe that everyone that sings with us has just as much to show me musically as I have to show them.”

Despite his current skill level, his first foray into music wasn’t encouraging. When he was 8 years old, his sister, who plays piano, attempted to give him a few lessons at the request of their parents. “It did not go well, nor did it last long,” he remembers. A few years passed and he joined the middle school band playing trombone. “More than anything else, I realized I loved making music with other people, and that rekindled my interest in other music.” At around the age of 14 he taught himself to play the piano, and about a year later started taking lessons.

He knew he wanted to pursue music academically during his sophomore year of high school, in a music theory class. He describes being surrounded by other musicians who were serious about music and loving the environment of a theory classroom. “Each of us learning together about something we all felt so strongly about, each of us being able to contribute to the conversation while no one was inherently wrong,” he remembers. “I fell in love with that environment.”

And that explains his major: music theory; the historical, artistic, and analytical study of music. “Some people think of it as the math or the rules of music,” he explains, “but instead of music theory being a set of rules to follow, it is more helpful to think of music theory as an activity; through music theory and analyzing great works of music, we can become closer to the music and the intent of it, as a performer, a researcher, or a listener.”

But just because Martschenko enjoys the precision and formality of music theory, doesn’t mean he doesn’t have fun with music too. “Before the pandemic, I would invite 10 or 12 people over to my house and either invite them to bring an instrument or give them one of mine,” he explains. “And we could just improvise for hours. Sometimes it was cacophonous and silly, but other times we try to structure it and attempt to make something meaningful.”

Through ECU he is involved in a lot of performing groups: ECU Chamber Singers, Baroque Ensemble, UnCaged (a free improvisation group of 20th century music), and Opera Theater. He also accompanies instrumentalists and vocalists, and works on chamber music.

Martschenko says his favorite piece of music is Henryk Gorecki’s Symphony no. 3, “Symphony of Sorrowful Songs.” It’s a song about grief. “It is truly a heart wrenching work, and sometimes I believe that is necessary, especially as we go through a time right now surrounded by so much death and anguish,” he explains.“Reminding ourselves of the difficulty of the world right now is not easy, but it keeps us from ignoring what should be honored, and it also keeps us from taking for granted the better times behind and ahead of us.”

Another musical favorite feels like a promise of better times. It’s the lively, “Attaboy” from the Goat Rodeo Sessions by Chris Thile. “This is a bluegrass-esque group comprised of classical musicians, such as Yo-Yo Ma,” he explains, “and it is just fantastic.”