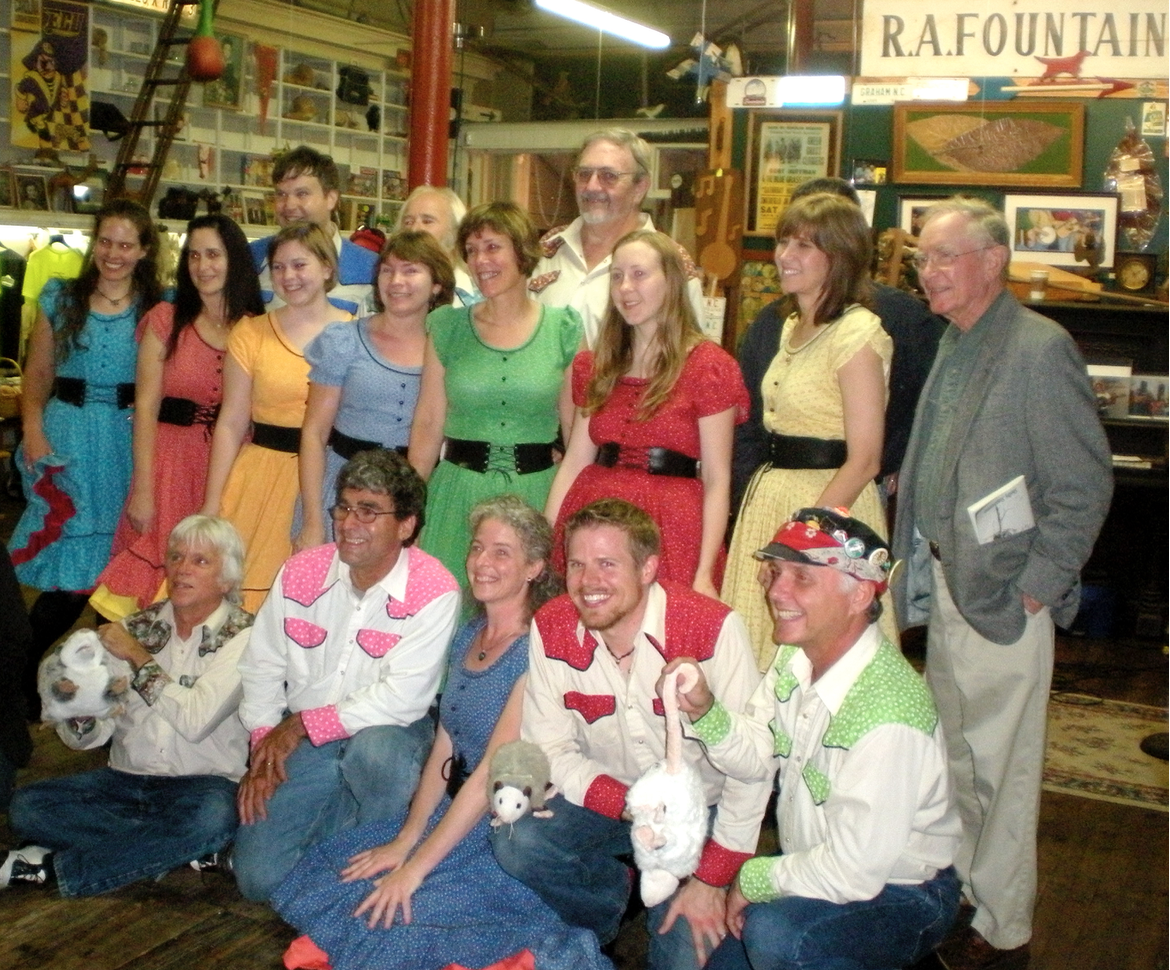 NC Poet Laureate Shelby Stephenson (r) was also celebrating publication of his latest book of ‘possum poems on this evening.

The Green Grass Cloggers are a clogging group founded in 1971 in Greenville, North Carolina by Dudley Culp, now with a branch based in Asheville as well.  They’ve danced at R.A Fountain several times as a group and often as individuals, and were featured acts on August 20, 2011 and on November 9, 2012.

Dudley Culp discovered this traditional style of dancing when he attended the World’s Championship Old Time Fiddler’s Convention in Union Grove, North Carolina in the spring of 1971, falling in love with the art of clogging.  He returned to school at East Carolina University and decided he wanted to learn how to clog, taking a square-dancing class and then starting a dance team with his friend Toni Jordan. The two, with the help of several interested ECU faculty members, recruited students for their team and began performing with the Flatland Family Band and competing at festivals around the state. They named their group the Green Grass Cloggers in reference to Greenville, bluegrass music, and the youth counterculture that they were a part of.

The Green Grass Cloggers’ performances are energetic, lively, and colorful.  An energy runs amongst the dancers, all in brightly colored costumes, as they dance to a live bluegrass band. According to a feature from the Blue Ridge Music Hall of Fame, the group has performed all over the United States, in Canada, and in a number of other international locations.

The group maintains a YouTube channel; their appearance at MerleFest in 2017 is documented here; at Hoppin’ John in 2016, here; and at Ocrafolk in 2015, here.

Smith, Leanne E. “History.” The Green Grass Cloggers. greengrasscloggers.com. Read it.
Smith, who teaches English at ECU was also editor of the North Carolina Folklore Journal. She is the Cloggers’ official historian.

In 1989, Mike Seeger produced the documentary Talking Feet, which is an entertaining and fascinating history of percussive dance. It includes several Green Grass Cloggers routines. Watch it.