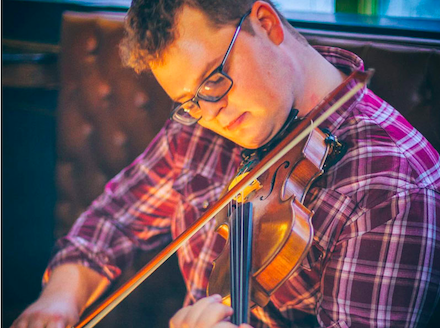 Four-time All-Ireland Fiddle Champion Dylan Foley performed at R.A. Fountain on November 30, 2012 with Jennifer Licko.  Called “one of the finest Irish fiddlers of his generation” by Brian Conway, he is known for his outstanding, impeccable, and spirited musicianship.

Performing around the world, Foley has shared his music from such grand stages as the Lincoln Center.  He also visited Vietnam in 2013 as part of Irish Aid to perform for those affected by the Vietnam War.

Foley released his debut solo album Hup! in 2012 and his second solo album Deliriously Happy in 2018.  Also a member of The Yanks, the band has released two albums, The Yanks (2013) and Haymaker (2014), to much praise.  He has also released several collaboration albums with other musicians, which can be purchased here.  Foley now tours the United States, primarily playing concerts in the New York area, and teaches private fiddle lessons.