The musician and train aficionado Charles Alford touched many lives through his music and youthful enthusiasm for trains. And in tribute, the community is invited to celebrate the music of Alford’s life, performed by the bands he helped form many years ago: the Emerald City Big Band, the Tar River Community Band, and special guests, including his son, Frank Alford. The event will be held in Greenville, May 21st at the Town Common.

Alford cast off his mortal coil on Dec 24, 2021, but his friends haven’t forgotten the enthusiasm that fueled his living.

“He smiled a lot and made friends easily,” a kindred spirit, David Bjorkman remembers. “It seemed that Charles knew everybody in the toy train hobby. Charles co-founded the Eastern Carolina Railroaders train club and organized the club’s activities. He was often invited to display toy trains at train shows, churches, and community events. His train layouts featured action, lights and sounds–all controlled by push buttons for kids and friends to operate.”

And apparently Alford didn’t keep his light under a bushel. “Charles had an outrageous set of train engineer overalls that he wore to train shows,” Bjorkman adds. “They were covered from the front to the knees in colorful railroad patches from real railroads to toy railroads. The outfit bothered me a bit when we went out to dinner, but it never embarrassed him.” 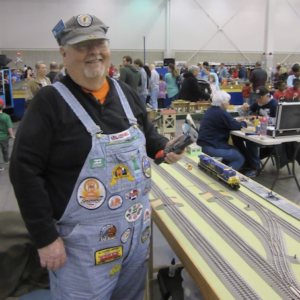 “He was always developing new projects and always sharing his ideas with friends,” Emery Davis remembers. “The phone would ring and Charles would say, ‘Hey, what YOU doing?’ Soon I was involved in some adventure involving trains or music that could take us almost anywhere.”

The friends performed together at church fundraisers, music scholarship events for the ECU Friends of Jazz, and concerts with the Emerald City Big Band as well as with a variety of smaller groups all around Eastern North Carolina. “It was a blessing to be his friend,” Davis says, “and I will always be grateful for the way he helped me see ways to have some small part in the amazing activities he promoted.”

Like Davis, Bjorkman remembers the calls from their friend: “Charles loved modern, state-of-the-art electronics to control his trains. When he couldn’t get a train to run, he would call me, no matter the day or time of night, to come bring my voltmeter and tool box. And after the problem was fixed we would stay up in the attic just running trains, making music with the whistles.”

“I would like the world to know how special it was that a laid-back jazz cat was able to share his passions with so many others including, of course, his family,” his son, Frank Alford, adds. While Alford shared his talents in many public ways, his son said that with his family he also went all out.

“When it was time to play Little League Baseball, not only did he volunteer to be an assistant coach, but he built a batting cage for the team by hand in our backyard,” Frank remembers. “He then was able to convince the parents of the kids on the team to ‘pitch’ in to buy a pitching machine! When it was time to sign up for scouts, he volunteered to be an assistant scoutmaster helping my brother and I to get to the rank of Eagle Scout. When it was time to play music, he got my brother going on the trumpet and me going on the saxophone. He provided incredible instruments and when I was asked if I wanted to tour with a ska band from Chapel Hill while I was at N.C. State, he supported me.  He came to local shows and even recorded on our album for international release! When it came time to share his love of trains, we had plenty to play with as his father had provided for him in his youth.”

Charles Alford grew up on Hancock Street in New Bern where the train track was laid down the middle of the street. His dad was the train yard master and was able to walk down to the train yard when the trains came down past his front door.

His friend David Bjorkman shared both his train and music interests: “Charles played saxophone in the Emerald City Big Band. I play violin in the Pitt Community Symphony. One day I asked Charles what pitch, A or maybe B-flat, he used to tune his sax. Charles simply looked curiously at me and said, ‘Tune?’”

In addition to the community bands, Alford participated in church praise and worship bands. “For a while, Charles played for two praise teams concurrently, one at Jarvis Memorial, the other at St. James, since the services were held at different times,” Harvey Estes says. “He had a great intuitive grasp of his instrument and was a master of improv. For any cake that the other musicians baked, he could always find an ornate icing. He was a big part of taking sounds and elevating them to music.”

Stephen Gray remembers Alford’s “extraordinary vigor” he provided for praise and worship services, adding, “He was such a joy and a true conductor. He ‘trained’ us well.”

“When the grandkids started coming along 15 years ago, he naturally started sharing his passions with them,” Frank Alford says. “Now there are young Alfords out there who play saxophone, flute, guitar, clarinet, football, softball, trains, and are involved in Scouting. What a legacy!”

Originally published in the Daily Reflector May 14, 2022. 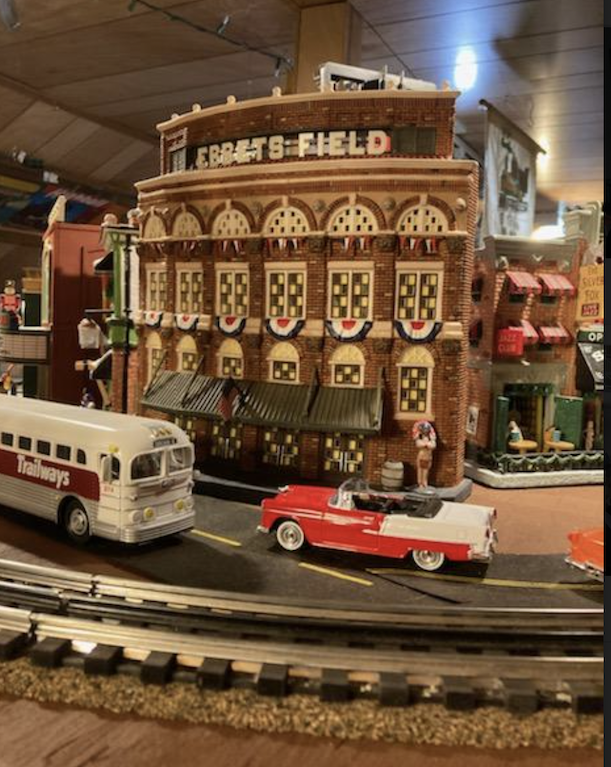 Alford’s track included his model of Ebbetts Field, home of his beloved Dodgers. The field was razed in 1960.

Charles Alford’s obituary, as published in the Daily Reflector

Charles Stephen Alford, Sr. passed away peacefully December 24, 2021 in Greenville, NC with his wife and sons by his side.

Charles enjoyed collecting and playing with model trains and organized regular train shows. He belonged to many train clubs and was a founding member of the Eastern Carolina Railroaders.

A lover of playing saxophone and trumpet since his youth, Charles founded the Tar River Community Band, co-founded the Emerald City Big Band, played in the praise band at St. James United Methodist Church, and played in numerous other musical groups. He also co-founded the Friends of Jazz at the ECU School of Music.

Charles was a long-time member of Jarvis Memorial United Methodist Church in Greenville.

A sports enthusiast and coach, Charles photographed for the local Hot Stove baseball league. He medaled in the state Senior Olympics and competed in Nationals. He was a Boy Scout leader, guiding both his sons to the rank of Eagle Scout. Charles was also an avid fishermen and loved landscaping.

A memorial service will be held at Jarvis Memorial United Methodist Church on January 15th at 11 a.m. with private burial following. In lieu of flowers, the family requests donations to the Ed Wheatley ECU Jazz Scholarship that Charles helped found. Checks can be written out to ECU Foundation with “Ed Wheatley ECU Jazz Scholarship” in the memo line, and mailed to Danny Wunker, 1016 Trinity Drive, Greenville, NC 27834. Online giving can be done at Gofundme.com by searching for “Ed Wheatley”.