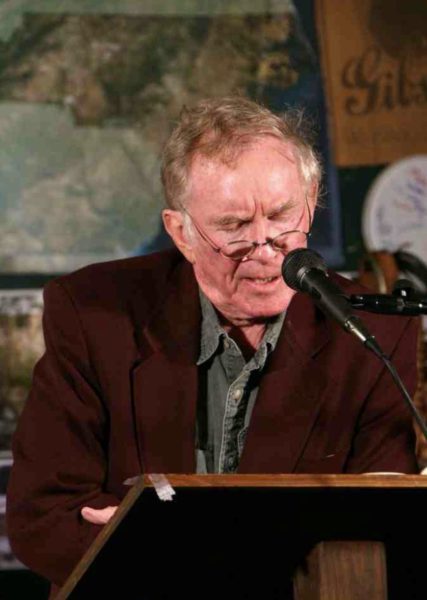 Shelby was featured at our Dead Poets’ Society reading in July 2012, when Walter Skold brought is van to town. Photo by Tom Whelan.

Shelby Stephenson, of McGee’s Crossroads, has become a Carolina treasure over a career that’s showcased his music and writing talents throughout the state but especially East Carolina. He and his family band, Stephenson Brothers and Linda, introduced bluegrass to R.A. Fountain during our grand opening in 2004, when he also brought along for the show the phenomenal fiddler Les Sandy.

Born in 1938, Shelby grew up country and with music all around him. He’s chronicled those experiences in a dozen books of poetry that, over the years, have constituted a portrait of a community and its people through time in the same way William Faulkner used his fictional Yoknapatawpha County. Two of his collections have been extended odes to the ‘possum as spirit animal, RAF joined the Order of the Possum to celebrate the first of those books, which Shelby read and then talked ‘possum more than poetry during a delightful swapping of ‘possum tales with our audience.

When he was installed as North Carolina’s Poet Laureate in 2014, he told David Menconi: “I grew up around possums and all that, and I’ve written about them a lot. There’s an old bluegrass song, too, ‘30 Pounds of Possum in My Headlights Tonight.’ My mom used to barbecue possum and we’d eat squirrel brains, too, and turtle. We hunted and fished and ate what we killed. That was life on the farm…”

My first encounter with him was through a poem he contributed to the 1984 collection Leaves of Greens:The Collard Poems, which I co-edited with Luke Whisnant. Then he came to read with our collard poets at the celebratory Collard Festival parade on our poets float and I saw that he was for real.

Shelby is one of a handful of contemporary poets (A.R. Ammons, James Applewhite, Joan Cockerell New and Marty Silverthorne especially) who have extensively used East Carolina farming as a setting sometimes suffused in conflict, and at others, in absolute joy. In the process, the farm poets of East Carolina also record an historical rendering of the old ways, but without the nostalgia that so often pervades such accounts. Economic deprivation and racism haunt much of this world, though music, family, and the beauty of a world limned in birdsong also celebrate what Faulkner called “the indomitable spirit of [humankind].”

For most every RAF performance and appearance–whether literary or musical or as someone else’s fan– Shelby was accompanied by his wife, Linda, and as Shelby and Linda Stephenson they released 4 CDs.