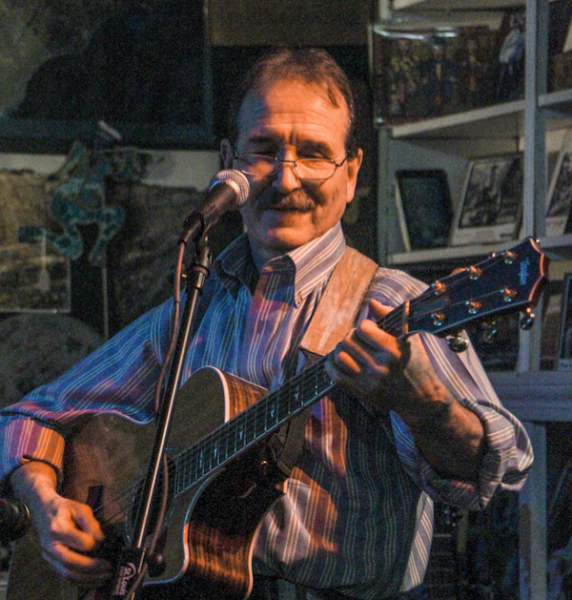 Hears the Music of Life

March may come in like a lion, but it’s bound to go out with a quickened step and a song in its heart. ‘Tis the season of Aran sweaters and rousing reels; a month that is more about music in the shade of green than the weather. And for Bill Redding, recognized locally for both his rich contribution to healthcare and music, playing Celtic music this time of year has become a longstanding tradition. It’s his listeners who are lucky. 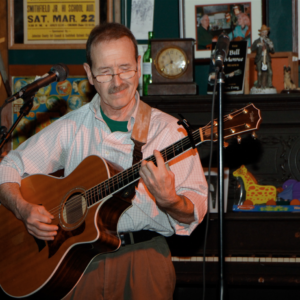 Born and raised in rural New York state with eight brothers and sisters and a large extended family, Redding says some of his earliest memories involve music: “The first song I remember hearing was ‘How much is that doggie in the window?’ My mom would turn on a little AM radio every morning to the Arthur Godfrey Radio Hour and other musical shows where I was exposed to the likes of the Chordettes, Tony Bennet, Mary Ford, and many other purveyors of the American Songbook.”

At Christmas and other special occasions his mother or one of his aunts would play the piano while family gathered around to sing. His older brother, Peter, would listen to “Hernando’s Hideway” on the same little AM radio while they did the dishes after supper every night. Early rock and roll performers like Buddy Holly, Elvis Presley, and Chuck Berry made an impression and Redding began singing a capella. “Peter also made me a radio out of a toilet paper roll wrapped with copper wire (one end of which was an antenna attached to the gutter outside my bedroom window and the other end to an ear phone), a capacitor and a crystal detector.  I fell asleep each night with that earphone in listening to a great, eclectic radio station WKBW out of Buffalo,” Redding remembers.

Redding was 12 when he received his first guitar for Christmas, and the urban folk music scene was just starting. “I began learning the songs of Bob Dylan, Peter Paul and Mary, Gordon Lightfoot and numerous others, which encouraged me to look back and learn the earlier folk artists like Woody Guthrie and Pete Seeger,” he says. He also learned Irish songs from records his father and uncle had.

“Throughout my teens I played campfires, high school assemblies, soirées, and a couple of coffee houses in Buffalo,” Redding says.

At school he sang regularly in a group called Billy Mastro and The Nosebleeds, doing folk and rock songs. He also performed in high school plays and musicals and still remembers many of the songs from Oklahoma and West Side Story. “When I was 18, I went to a club in Buffalo called The Inferno where I saw Wilson Pickett.  I said to myself, ‘Oh, so that’s how you sing!’” Redding remembers.

After high school Redding joined the Navy and worked as a corpsman for four years. “At my first duty station in Charleston, SC, a group of friends, which included my now-wife Susan, opened a coffee house where I performed regularly. Because my last name was Redding and I played Dock Of The Bay, everyone started calling me ‘Otis,’” he says.

“The MC introduced me as Otis Redding and thousands of Marines and sailors started yelling and screaming and clapping (even though Otis had been dead for 3 years). When I walked on with my acoustic guitar the crowd got very quiet and after I did ‘Lay Lady Lay,’ ‘All Along The Watchtower,’ and ‘Dear Landlord,’ the applause was pretty subdued,” Redding remembers. “And, I never got to meet Marilyn McCoo.”

In his last year in the Navy, Redding married, and he and his wife Susan sang together in a folk mass group in Oceanside, CA. They moved to North Carolina in 1972 where he began his career and further education in healthcare, culminating with a Family Nurse Practitioner (FNP) degree. They moved to Greenville in 1979 when he took a job as an FNP at the Family Practice Center where he worked for 36 years. 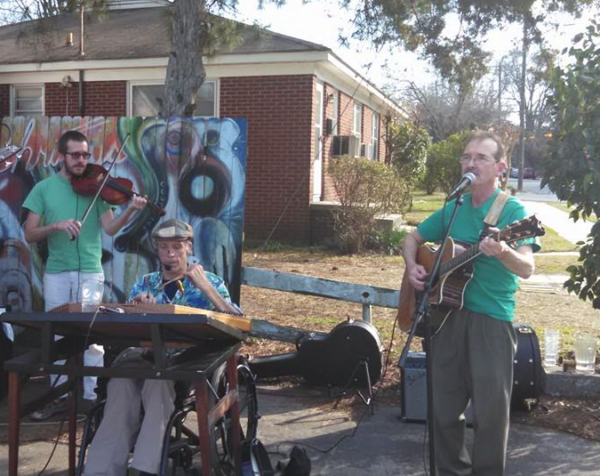 Meeting Mike Hamer was pivotal in the subsequent development of his music: “Mike introduced me to other local musicians through jams at his house and bands he played in. We discovered our mutual love of Celtic music and started doing St. Patrick’s Day gigs together at R.A. Fountain General Store, Christy’s Euro Pub, Cypress Glen and other local venues.”

“Nathan Maxwell joined us on viola which really enhanced our sound, along with a bass, now played by Ed Tilley. Mike died 3 years ago and was a real loss to our group and the whole Greenville community. COVID-19 caused the cancellation of our Irish gigs for the first time in 20 some years.”

Mike Hamer also introduced Redding to Lightnin’ Wells who told him about blues workshops he taught which Redding  has been attending almost every year for two decades.

“I’ve felt fortunate over the years to have music as a hobby, an occasional side gig, and a constant companion for creativity and pure enjoyment,” Redding says. “Creativity” is the only hint he gives of his considerable talent as a songwriter.

Redding’s sentiments about music (and beyond) are aptly summarized by a memory from the time he was in service. His wife, Susan, sent him a Bob Dylan songbook in 1969 while he was in Vietnam and in it she wrote, “Only one thing matters: that wherever we go and however we go, we hear the music of life.”