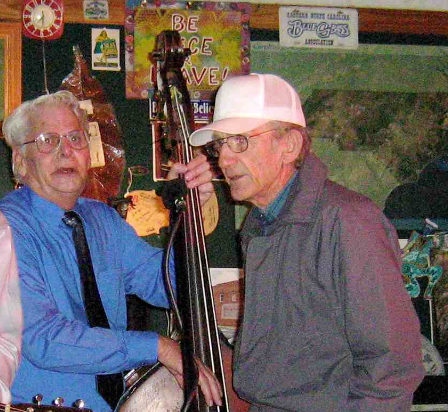 We were fortunate to be situated so close to Roby Huffman’s home in Smithfield, and that he enjoyed our venue and crowds enough to keep coming back, over a dozen times fronting his band during his last seven years of performing. Usually, he closed his shows out with “Ruby,” but one night he gave us an encore, and he also sometimes came over with his wife, Judy, to just to enjoy a concert by Samantha Casey and the Bluegrass Jam, though invariably he’d get up and sing a song or two. A few of those shows were multi-generational Huffman affairs, also, with son Jeff, his usual lead guitarist, and Jeff’s daughter, Casey, on mandolin.

He had to cancel his last scheduled show at RAF, and within a couple of months we learned of his passing. I was among the hundreds at his funeral and filed the following report with a couple of online bluegrass outlets.

[Smithfield, NC] Roby Huffman, the premier bluegrass tenor in eastern North Carolina who fronted the Bluegrass Cut-Ups since the late 1950s, died here on December 29, 2012 after a brief period of declining health. He was 74.

Roby Leroy Huffman was born July 15, 1938, in rural Burke County, NC. He moved to the Smithfield area after Hurricane Hazel, in 1954, searching for work in the storm cleanup. What he found there was a wife and an untapped talent for singing bluegrass tenor. “Roby said he had never played a guitar or sung in public before he met Judy,” the Rev. Dennis Pollock said during the New Year’s Day funeral service. “She must have taught him pretty good.”

Roby and Judy Huffman were married for 55 years. In addition to Judy Huffman, he is survived by their three daughters and son, Jeff, who has been the band’s lead guitarist for several years; six sisters and two brothers; 12 grandchildren; and 4 great-grandchildren.

Huffman’s funeral was held on a cold and rainy afternoon at Tee’s Chapel Free Will Baptist Church, between Brogden and Smithfield. Principal eulogist was Al Batten, who recalled Huffman fondly and with great respect. “My tears,” he said, “are of both joy and sadness, the sadness of knowing we’ve lost him, but the joy of knowing that he did not suffer long in this world.”

Batten, whose first banjo jobs were with Huffman and his Cutups, called him “one of the world’s best tenors, and one of the truest tenors in the business.” He remembered their first meeting, when he was but 16, and being stunned at the power of such a little man’s voice. “He was small,” Batten said, “because he never stopped working long enough to eat.”

Batten played gigs with the Cut-Ups between 1968-72, filling in for Jesse Harmon when he was unable to play.

Although he traveled successfully with the Cut-Ups, especially in the 1980s and ’90s, Huffman never quit his day job as a brick mason, preferring the steady work to take care of his family instead of the uncertainty of the road. In recent years, he had confined his performances to festivals, venues, and churches near his Smithfield home.

He and his band made three LPs and three CDs, all of which are out-of-print, but several song performances from Marshall Stephenson’s 2006 television show “Bluegrass Train” are available as YouTube videos.

The funeral service included recordings of original Huffman bluegrass gospel songs, as performed by his band, played through the powerful house sound system. In the standing-room crowd of over 400 were Lorraine Jordan, Russell Johnson, Clyde Mattocks, Daniel and Samantha Casey, Ray Bridgers, Marshall Stephenson, Mike Rose, Tim Myatt, J.R. Stafford, and Ted Jones. Nearly 500 mourners had stopped by for visitation prior to the service.

Russell Johnson recalled that the first music that meant anything to him was on two 8-track tapes he had, one by Huffman and the other by the Osborne Brothers: “And it’s true,” he said. “I couldn’t tell which was which if I didn’t know which one was in the machine.”

Burial was at Oakland Presbyterian Church near Clayton.

PragueFrank has compiled an impressive online Roby Huffman & the Bluegrass Cut-Ups discography (read it) , which includes these items:.

One More Time. Buy it. 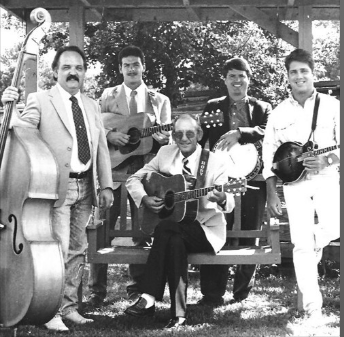 One significant omission is this unreleased LP, which you can now listen to on line thanks to Hugh Moore’s SoundCloud account: Roby Huffman & the Bluegrass Cut-Ups (1996).
Moore introduces the recording: “This was a recorded project in 1996. The album was never released, for a lot of reasons, but this recording leaves no doubt that Roby Huffman was one of the best Bluegrass vocalists North Carolina has ever known. Listen to “Muleskinner Blues,
or any other of these fine cuts, and see if you agree.”

Moore and Roby Huffman & the Cut-Ups also released a 1986 recording, Hello, City Limits, in 1986 on Folkways.

A nearly complete roster of the performing Cut-Ups

Kenneth Glover was Huffman’s original bass player and was with him on most shows until his own illness in 2011. Prior to a benefit for Glover at RAF, he, Wade Hampton, and Roby attempted to re-construct the various incarnations of the Cut-Ups. Hamilton had a bluegrass radio show on WBZB 1090 a.m. in Smithfield in the 1960s and helped promote Huffman when he was first starting out.

In addition to Marshall Strickland, other banjo pickers with the Cut-Ups have included G.G. Woodall, who died in 2011; Jesse Harmon of Edenton; Hugh Moore of Raleigh; Kenneth Peed of South Boston, Virginia; John Whitley of Wendell, who also played Dobro; Batten of Selma (“He lives on Bluegrass Road,” Hampton noted) and his current banjo picker, Daniel Casey.

Glover and Elmer Jackson are the only two bassists who have played with the Cut-Ups.

Other mandolin players: Tommy Mendenhall of Greensboro; Norman Wright of South Boston, Virginia; and  Mike Rose of Goldsboro. Jeff’s Huffman’s daughter, Casey, sat in a few times with the band.

Travis Johnson of Four Oaks succeeded Willie Lee on lead guitar. They are the only two guitarists except for Huffman’s son, Jeff, who have played with the Cut-Ups.

Samantha Casey and Bob Creech are the only two fiddlers to play regularly as a Cut-Up.