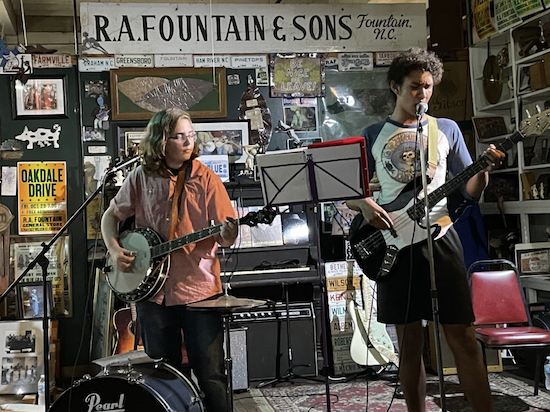 Not just a Destination, but a Musical Journey

Oakdale Drive: Not just a Destination, but a Musical Journey

Ayden high school students August Meyer and Jayden Peszko call themselves Oakdale Drive. The band’s name is derived from a street in Ayden. But the impetus for the band was simply the love of music.

“We just formed out of jamming together,” Peszko said. “We got together because out of all the musicians at our school, Auggie and I were the only ones serious enough or willing enough to play outside of school. From then, we practiced on Auggie’s street (Oakdale Drive) and the rest has been history.”

There they performed a mix of original music and classics such as Pink Floyd’s “The Time,” “Take it Easy,” by The Eagles and “Heart Full of Soul,” by The Yardbirds. Before launching into “Purple Haze,” Peszko said, “My name is Jayden, not Jimi.”

“I want you to imagine something nice,” Peszko said as he introduced John Lennon’s “Imagine.” He added with a hint of pride in his voice, “I arranged my own bass line.” Meyer bantered back, “I don’t know if they’ll get the bass line arrangement, but I hope they like the song.”

Meyer played “Cripple Creek” on banjo, solo. Friends of his may know that his first banjo appeared under the Christmas tree in 2020, but audiences would find that hard to believe, given his command of the instrument.

“To be honest, I don’t really know where to credit my progress, but hard work and practice makes the most of it,” Meyer explained. “In my mind, I treat the band as a full time job, so practice is one of the commitments I make to be a well-oiled machine functioning in the band.” 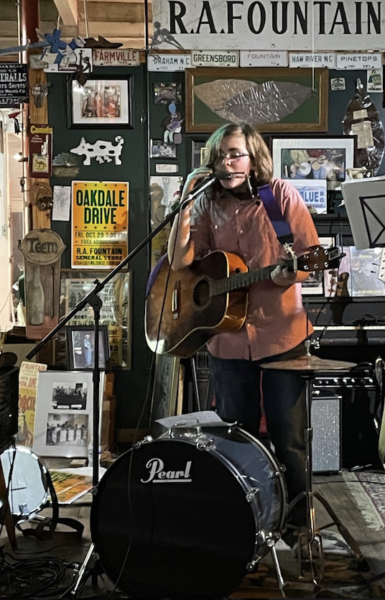 Peszko agreed. “All of it goes to devoted practice anywhere I can get it. I will walk with my guitar around the halls in school and practice with this little portable amp and some headphones.”

Peszko played in orchestra in elementary and middle school but quit until his interest was reignited in high school when listening to guitarists like Jimi Hendrix and David Gilmour: “I picked up the guitar along with some lessons and my band director noticed how good I was getting and recruited me to play in the marching band at school and created a Jam Band club for musicians at my school.”

Meyer started with drum lessons in elementary school, but then transitioned to guitar. “I stopped playing guitar around 6 years ago but picked it back up during the COVID-19 quarantine,” he said. “I was inspired to play banjo by Scott Avett of the Avett Brothers. I kept learning how to play numerous instruments in my home and brought them to live performances as well.”

In terms of musical styles, the duo has differing tastes, but they manage to make it work.

“I most enjoy playing psychedelic blues and hard rock because of its experimental type sounds and gritty guitar tones you can come across,” Peszko said. 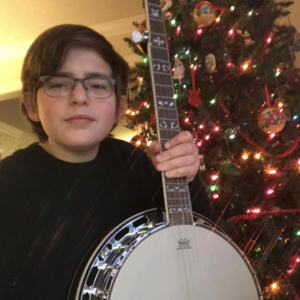 Meyer’s first banjo, a Christmas present from his grandfather

“I enjoy playing folk rock, Americana, and bluegrass music,” Meyer explained. “It is in sharp contrast with Jayden’s style of music, but we work well blending the different styles of music genres into the music we create.”

Peszko described how he goes about writing original music:“My creative process is ludicrous at times with me legitimately just letting my fingers glide on the fretboard and somehow a cool melody will arise. I usually make what I like in one sitting because the song or riff can go a whole new route if the energy is different.”

Meyer said they once spent 5 hours on a single riff, and it’s their favorite song: “Jammin’ Style.” He said the songwriting process evolves “from a couple of notes on a guitar or banjo to a full-fledged song.”

Originally published in the autumn 2021 issue of Ayden Magazine as part of the feature article “Collard Greens and Guitar Strings.”