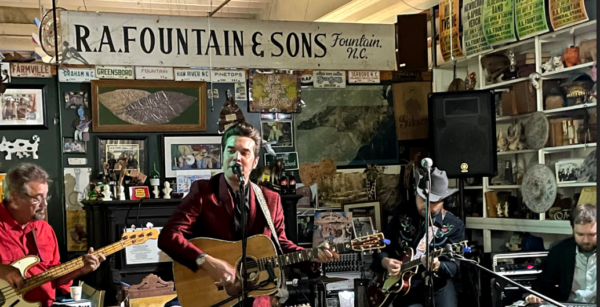 A Night to Remember at the R.A. Fountain General Store

A Night to Remember: The Malpass Brothers at the R.A. Fountain General Store

After attending a Malpass Brothers concert at R.A. Fountain General Store, it’s hard to say whose star shone brighter, the band or the venue. They complemented each other perfectly.

The venue is modestly nestled in a brick strip of storefronts that small town Main Street was known for. It radiates the retro charm of Mayberry U.S.A, with homemade ice cream and orangeade eastern North Carolina authenticity. 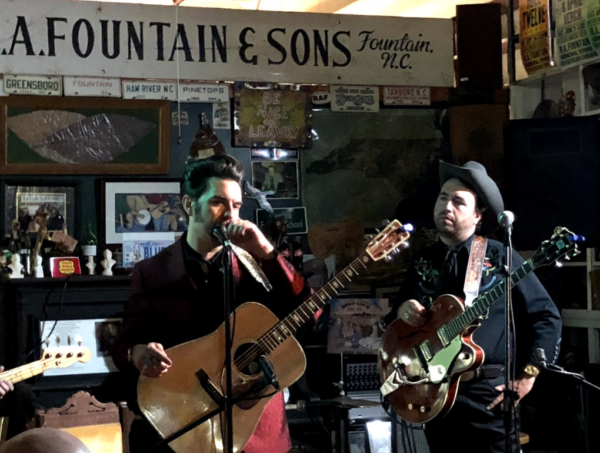 “Elect Bob Scott for Governor.” The politician from Haw River served as North Carolina’s 67th governor, from 1969 to 1973. An election poster on display freezes time, along with promotional posters from previous RA Fountain performers: Carolina Yellow Hammers, Hoot and Holler, Hutch and Scuff and Shoutin Red, Lightnin’ Wells, and yes, the Malpass Brothers.

The atmosphere is a heady, scenic overload for bibliophiles who can’t help but revel in the walls lined with vintage books. Ceiling fans spin lazily while a tall sliding ladder on a ceiling track offers mobile access to shelves out of reach, Hardwood floors that are not artificially distressed creak underfoot. A black and white canvas of Freeman Vines, holding a guitar, is a reminder of regional cultural preservation efforts.

“Here is your row,” the owner, himself, ushers us in. Lean and sporting an enviable shock of hair, he is a county commissioner, retired ECU English professor, and award winning author. It  feels like Elvis, himself, has answered his own front door.

Our “row”….we had one to ourselves, having reserved 7 tickets….was a wooden church pew, augmented comfortably by the addition of vintage-looking plush burgundy cushions.

“I want that horse!” my sister leans in to tell me. She gestures to a shelf way up high towards the back. It is some sort of wooden hobby horse that must be 100 years old. It keeps company with an odd and fascinating assortment of treasures.

I look around and notice the audience, most having eagerly arrived 30 minutes early. They…er we…are distinguished almost entirely by “snow on the mountain” maturity. I wonder if it takes a requisite lifetime to discover the good things in life…like R.A. Fountain General Store and the Malpass Brothers. And then I notice that my young niece and her boyfriend, with their distinctive twinsies red hair,  are eagerly buying show posters and angling to have them autographed by “the boys.”

The last time I saw the Malpass Brothers was from the balcony of the Paramount Theater in Goldsboro. And while that was also a wonderful performance, being seated just three rows from the unassuming stage makes me feel like all my friends are missing out. I fight the urge to text them and tell them so.

I can see a sparse drum set, I guess snare and cymbals, in front of a piano that looks like Matt Dillon and Kitty should be standing beside, or else Scott Joplin himself should be playing The Maple Leaf Rag.

The proprietor ambles up front, and without so much as leaning into a microphone, introduces the boys with little fanfare. He knows it’s not necessary: this is already an appreciative audience. 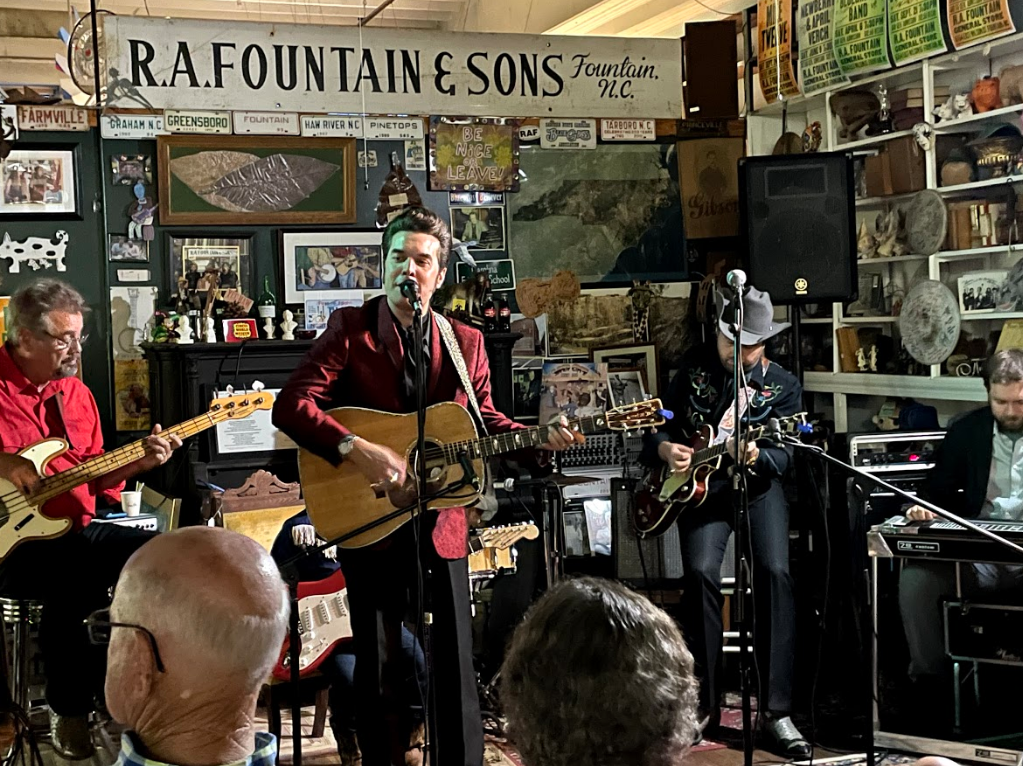 They’ve brought along their father, Chris Senior, to play bass, as he did in the early years when they toured as a family. He’s wearing a red shirt, playing an electric bass with a somber expression that echoes that of his son, Taylor, on electric guitar. Taylor sports a cowboy hat and black, embroidered shirt. The lanky drummer wears a shiny turquoise vest, and earlier audience minglings revealed extra celebrity-style accoutrements, like a silver wrist band (bracelet?) and a turquoise finger ring…or two. His toothy grin wins over any audience members who might have thought him over-embellished. We learn his name is Paul Winstead from Carteret County. The most conservative looking of the group is the steel guitar player, Brian Batten, a longtime family friend of the brothers from New Bern. Chris Malpass is the showy one, with his highly stylized Porter Wagoner hairdo and sideburns. He wears a shiny, burgundy jacket with black shirt, black neck scarf and pants.

The star of the show, however, at least initially, is the shortest one on stage. A boy strides out wearing a country-western fringed shirt, carrying a bass guitar almost as big as he is.

“There are three generations of Malpasses on stage,” Chris says with pride in his voice. “Our dad is with us, and this is my boy, Barrett Lee Malpass.”

Chris explains that their father had COVID in the past year and has endured a long recovery. The brothers encouraged him to play bass with them since the venue was close to home. “He hasn’t played a lick in probably five years,” Chris smiles. But he’s not worried, and it is soon clear that playing bass (for his father, anyway) is like riding a bicycle. Occasionally Chris mutters what key a song is in, or says to his father, “We’re gonna play [song title]…is that alright?”

“The Green, Green Grass of Home” follows. Chris sings the majority of the songs, but Taylor chimes in with impressive instrumental breaks. During intermission Chris Senior shares that while he had to work hard at music, it came naturally to Taylor.

Chris demonstrates some impressive yodeling chops in “Long Gone Lonesome Blues” and Taylor follows with an emotive, “The Other Woman.” Together they blend smooth harmonies in “What have you got planned tonight Diana?”

The brothers have clearly discovered their “brand” and play it to the hilt. They are keeping retro style country…the likes of Jim Reeves, Ernest Tubb, Merle Haggard, Hank Williams, and Johnny Cash alive for a new generation.

Chris captures the audience with spontaneous hip gyrations or side kicks. Taylor leverages his deadpan expression to full advantage as a setup for jokes where he purposefully obfuscates words, resulting in appreciative chuckles. In “Before the Next Teardrop Falls” he purports to sing the Spanish segments, using, shall we say, creative license. Together the brothers combine their respective strengths to weave a sort of magic that makes sibling groups distinctive and special.

The steel guitar player, Brian Batten, is invited out with a resonator guitar (Dobro) and plays an instrumental, “The Old Rugged Cross. “ Introducing the song Chris says that Bryan was taught by Clyde Mattocks. “Y’all know Clyde Mattocks, don’t you?”  He knows we do.

“The humidity is tough…can’t keep this guitar in tune,” Chris says, twisting his instrument’s tuners. “I’m just waiting for my hair to collapse any minute.”

Chris delivers Johnny Cash’s “Luther Played the Boogie Woogie” with a nimble tongue and Taylor plays the riffs with a requisite groove that would have made the Man in Black — and The Tennessee Three — proud.

“The last song is dedicated to our veterans,” Chris Malpass says somberly. “Without them and the good Lord, we wouldn’t be here.” He acknowledges that some would not find the song politically correct today, but adds, “I don’t care,” and launches into Merle Haggard’s “Okie from Muskogee.”

Following enthusiastic applause (as much as an audience not used to staying up that late could muster) and calls for “One more!” the boys launch into “C C Rider.”

And with that, Chris says that his son, Barrett Lee, has reminded him not to forget to pay his tab. Apparently he has had an ice cream or three…

Concert goers spill out onto the wet, puddled sidewalks in search of their cars, almost surprised by the obvious signs of a storm that had been in full fury while they’d been preoccupied. For during an hour and a half (or better) we’d been transported back in time, when the hair had a sheen, the  music, a twang, and the strongest beverage for sale was a freshly squeezed orangeade.