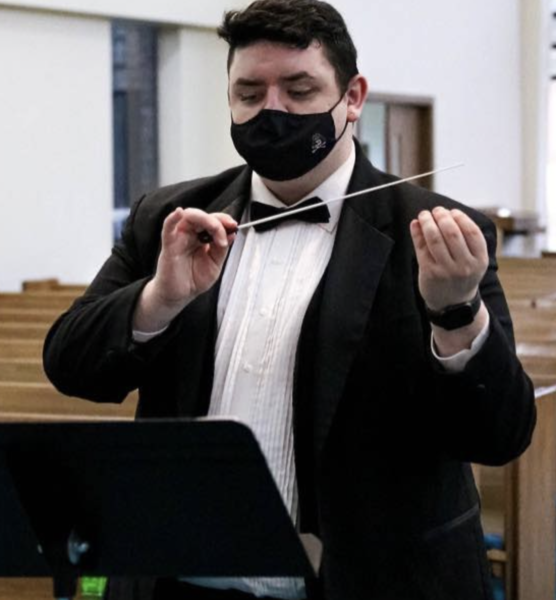 It doesn’t require Punxsutawney Phil or the vernal equinox to determine when spring will arrive in Greenville this year. Musically, it has been predestined through valiant efforts of the Pride and Joy Saxophone Ensemble. Their concert branded, simply, “Springomatic” is set for February 21. The music on tap is described like the wide range of eastern North Carolina weather: “upbeat, scornful, exciting, and heartwarming.”

The group is a community saxophone ensemble founded in 2018 by the current director Robert Dale Cox who is a junior Music education and performance Double Major at ECU. He describes the ensemble’s main purpose as to “focus on building the saxophone ensemble repertoire, performing concerts in and around Pitt County, and attending events outside the state to give our town representation.” Cox said, “This ensemble is open for all saxophone players, string bass players, and percussionists. Any level of playing (beginners-advanced) is welcomed, as this ensemble also is for people to grow as musicians.”

The ensemble’s first performance was on Memorial Day weekend 2019 in Farmville. So for most of the ensemble’s existence members have grappled with the challenges of performance art during a pandemic. One big disappointment was the cancellation of the United States Navy Band International Saxophone Symposium that had been scheduled for March. The group had been preparing for a performance at the event that has been in place for 40 years. The symposium coordinator cited the “worsening pandemic” that offered “no path forward for safely holding the event.”

Cox explained, “COVID has made us not rehearse the way I would like; we still distance as much as we can and have a space where we try to keep people safe. We are hoping that the best is to come and we can get back to normalcy in the fall.”

A Greenville native, Cox graduated from D.H. Conley High School where he participated in the Honors Choir, Concert/Symphonic Band, and the Wind Ensemble. Jazz and Marching bands rounded out his four years of high school music immersion.  At ECU Cox has played in at least seven different orchestras, bands, and ensembles. He described Pride and Joy as “something I am doing to better our city and better the music scene here in Greenville.”

Cox said the people stand out the most to him. “The ensemble wouldn’t be what it is without the people who help make it run. We have people of all kinds of ages and backgrounds and we come together to make music together.”

Saxophonist Michael Stephenson participates in the ensemble. He is coordinator of Music and Drama for Pitt Community College and co-owner of the Music Academy. “I have really enjoyed the opportunity to perform in the Pride and Joy Saxophone Ensemble,” he said. “I think everyone is surprised when they hear a saxophone ensemble for the first time at how expressive and powerful the sound can be. Dale [Cox] has done a great job in bringing this experience to the community and I look forward to what the future holds.”

Stephenson said that he’s been fortunate to have performed in large saxophone ensembles since he was a teenager. “My former saxophone instructor, James Houlik, really believed in the usefulness of the saxophone ensemble in teaching various musical techniques. I wouldn’t be surprised that when he (Houlik) was a professor at ECU that he would have been conducting an ensemble with the students. It’s great Dale is giving community musicians an opportunity to participate in this joyful activity.”

The Springomatic concert will feature multiple works by living composers such as Richard Saucedo, Yosuke Fukuda, and Steven Bryant. The P&J Saxophone Ensemble is bringing in guest conductor Kevin Day who will conduct his work written for saxophone choir, string bass, and percussion. Cox requested the piece be written during COVID isolations. The piece has premiered online, but Springomatic will feature the first live performance. The event will be held at Immanuel Baptist Church, 1101 S. Elm Street, on Monday, February 21st at 7:30 p.m. Tickets are $3 each, with discounts for families of 4 or more.

In addition to Springomatic, the ensemble plans A Night on Broadway on April 25, and fall, Halloween, and winter concerts. The group ranges in 15 to 22 members, requires a $5 semester membership fee, but no auditions are required.

Concerning the origin of the ensemble’s name Cox said, “The name Pride and Joy came to me when I was thinking about music. Music gives me joy and nothing gives me more pride than when a student succeeds!”