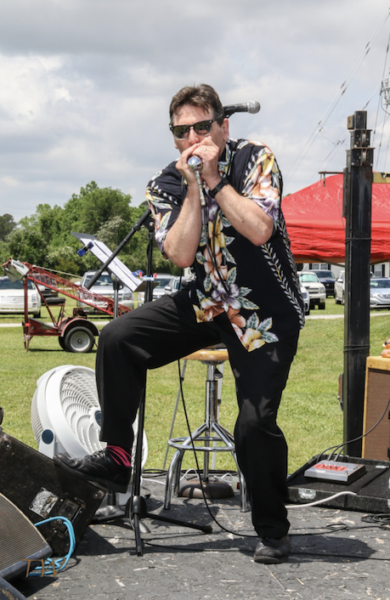 To Bill Hunneke, music is everywhere

Perchance it’s not unusual for an environmental quality professional to find music “living in the breeze” and “in the pulse of the sea.” Local musician Bill Hunneke explains it all in what feels like an autobiographical CD, Melodious Thunk. He wrote and produced the songs when he was earning his oceanography master’s degree in Hawaii years ago. In the song, “It’s everywhere,” Hunneke goes on to explain: “Don’t ask where the music is; it’s there within your soul.” In another, “No big deal,” he cautions that music should “come from the heart”–but ultimately not be taken too seriously. 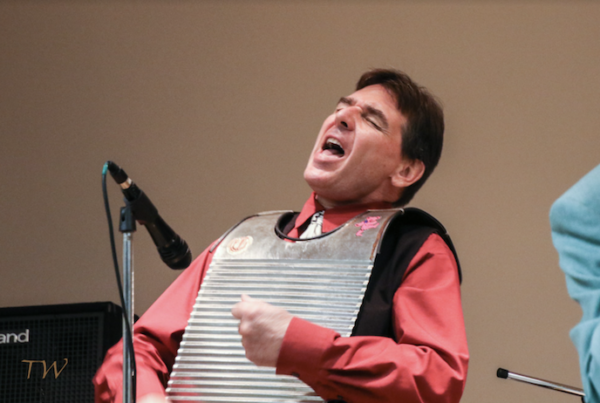 Anyone who has seen Hunneke perform can recognize that he has taken his musicianship seriously–done his homework–but is more than willing to enjoy light-hearted fun on stage. Even his choice of instruments leans towards the whimsical: harmonica and washboard.

Hunneke credits his mother for supporting his interest in music. “Music was always around in our house,” he recalls. “Records were played on a big stand up Victrola, from Beethoven to Beatles, Kingston Trio, Herb Alpert & Tijuana Brass. With my mother, we could play any instrument we wanted, but piano had to come first. I wish I had kept it up–it’s really hard to play harmonica and sing.”

In middle school, Hunneke played orchestra percussion, with timpani being his favorite. His vocal undergirding came from church, school choir and all-county chorus. He sang in Madrigals and participated in plays and musicals. “I loved the theater and stage–all aspects of production–and especially cast parties,” he says.

It was during college that he was introduced to the harmonica. “A close friend gave me my first harmonica as I was enamored of singer songwriters such as Bob Dylan, Neil Young, Robert Hunter,” he remembers. “I just hacked at it for a long time.”

Around that time Hunneke explains that his “lifelong affinity for writing blossomed” and he took to journal and poetry writing. He cites Jack Kerouac and the Beat poets as big influences.

“My love of music and especially live music continued to grow,” Hunneke says. “Southern rock was really big then and the Grateful Dead became a huge influence and their ethos and affinity for taking traditional music and genre-bending, envelope-pushing would play an ever widening role in my take on music. I also discovered the music of people like Miles Davis and John Coltrane and that blew my mind.”

During his ”Melodius Thunk” era in Hawaii, Hunneke also had the opportunity to play with Grateful Dead guitarist Bob Weir and blues icon Taj Mahal on the beach in Kauai, following a show. He describes the experience as “one of my musical highlights.”

Hunneke’s washboard came in the picture during a conference in New Orleans: “I was presenting a paper and my family came along. My grandmother bought me the washboard.”

After moving back to North Carolina in 1995, Hunneke joined forces with Lynn Smith and Brian Raynor from Deep Run who were forming a band called Slow Children Playing. The band played across eastern North Carolina for about a decade.

Next, he put together Some Assembly Required, a band he describes as “a very diverse 8-piece group of like-minded musicians ranging in age from 33 to 77 with music representative of every one of the decades between our respective birth years in their repertoire.” 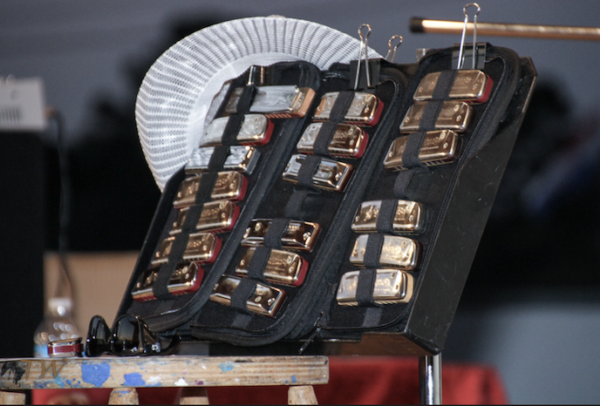 Other musical endeavors included doing some “music-in-the-schools” programs where he would bring his harps and washboard and other implements into the classrooms. “I was showing students that there were cool things you could do with music if the spirit moved you,” he says. “It was well received and a valuable thing to do with young folks.  I would encourage any musician to consider it.”

As a reflection of regional charm, Hunneke’s music has taken him from Sweet Potato Parties to River Jams to playing “The National Anthem” at the Kinston Indians/Down East Wood Ducks games for years. “Nothing like stepping out onto a freshly groomed baseball field just before the game,” Hunneke says. “Almost like walking into church.”

Introduced to the Merlefest festival in 2000, Hunneke hasn’t missed one since: “I was always peripherally a bluegrass fan; probably my earliest indoctrination came through the music of Jerry Garcia. One of my all-time Merlefest highlights was playing with Jorma Kaukonen at one of the ‘Pickin Places’ the festival hosted.  I was the only harp player in a sea of guitars and mandolins. What a treat.”

Hunneke credits his dear friend and harmonica mentor Paul Messinger for helping him take his playing to another level: “I first met him when he staged a weeklong seminar with Howard Levy  of Béla Fleck fame and various members of the Harmonica Mafia.”

“The Harmonica Mafia,” Hunneke explains, “were some of the finest harmonica players in North America, though not household names. I gleaned untold amounts of harmonica knowledge, taking lessons, and hanging out with several of them. Literally changed my life in terms of the level I was now able to work at and the newfound notes I had access to on that little tin sandwich.”

Messinger also introduced Hunneke to the Society for the Preservation and Advancement of Harmonica. Since then he has attended annual conferences and writes pieces for their quarterly magazine.

“Paul turned me on to another really cool thing for musicians to do on the campus of Davis & Elkins College in West Virginia,” hd says: “a week long ‘Blues Week’ where I stayed on campus in the dorms and attended daily classes with world-class harp player such as Phil Wiggins and Joe Filisko and then stayed up most of the nights jamming. Talk about total immersion.”

Locally, Hunneke can be seen playing with the bands Built for Comfort and the Donald Thompson Band.

“I first met Landy Spain and Built for Comfort when my good trouble-buddy Bob Aiken said I should wander up to AJ McMurphy’s and sit in with them,” he says. “Landy was very generous and let me sit in with them for a goodly number of songs that December. I did not know I was being auditioned.”

Hunneke credits Spain for helping him gain a more studied approach to song presentations with limited instruments: “He knows just how to work each instrument at his disposal; and with a four piece, believe me everyone must shoulder a different load playing ‘parts’ is essential. I was used to playing a lot of horn lines on harp anyway, but this experience took it up a notch. Landy is uber disciplined and I know I am a better player for having worked with him these last seven or however many years. We are still having a great time and Joe and Al are also terrific bandmates.”

Donald Thompson recruited Hunneke for his band a number of years ago and they play with some regularity. “I love watching Donald at 82 years young cut a rug that would make most 25-year olds envious,” Hunneke says.

Built for Comfort played recently at Carolina Beach and Hunneke described the experience as a “blast,” going on to explain, “I played ‘The National Anthem’ as the fireworks began and then we jumped into ‘Purple Haze,’ which the crowd seemed to enjoy.”

Summing up his feelings about performing, Hunneke says, “Whenever I am privileged –and I do consider it that– to be on a stage, I’m always watching the audience and thinking ‘What can I do to breathe a little fire onto this stage, and then let some of those flames spill out onto the floor?’”

Melodious Thunk produced two albums that are available for listening on SoundCloud. Hunneke can be seen locally September 24, 8pm, at AJ McMurphy’s with Built for Comfort. 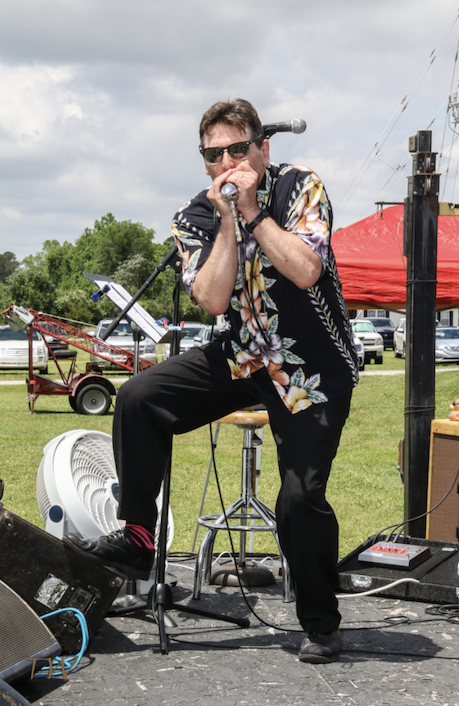