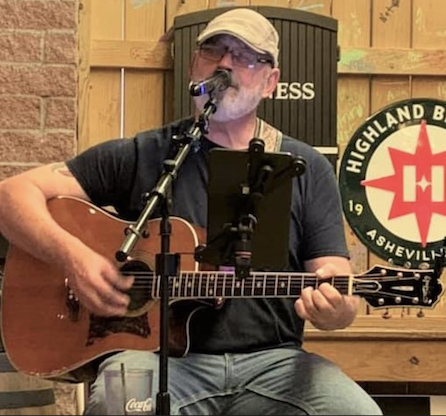 The host of A.J. McMurphy’s Monday night open mic called “Rhythm and Grooves,” John Williams has been described as a “staple of open mics in Greenville.” Susan Baugham remembers him hosting open mic at the Coffee Shack (now the Biscuit and Bean in Winterville) and Tapped.

Williams laughs and admits, “I’ve hosted a few. At one time I was hosting 3 to 4 per week. The thing that got me into hosting open mics was a beautiful, blonde haired girl with big brown eyes that I couldn’t say no to. That was actually the first one I started running. It was at Wizard’s in Ayden.”

Hailing from Florida, Williams calls himself “a Navy brat” that moved around a lot. He came to Greenville from Virginia to play football and wrestle for ECU. But then he grew roots. “After I graduated I married a Greenville native and started teaching in Ayden and also at Pitt Community,” he says.

He blames the British invasion for sparking his interest in music. The Beatles, Rolling Stones, Led Zeppelin. But while he played cornet, baritone, and tuba in the school concert band, he didn’t start playing guitar until college, when he started learning from some of the other football players.

“I did a lot of musical theater around eastern NC and at the ECU summer series and outdoor dramas,” Williams says. “I put down the guitar for quite a number of years because of work, raising a child, marriage, etcetera.–you know, life in general. I picked it back up after my wife died and started playing in a little jam session every week at a little beer and wine shop in Ayden called Cindirene’s. The music and people there helped me heal and I stayed with it, to quote a Beatles song, ‘With a little help from my friends.’ Then I started playing some other instruments. For example, they didn’t have anyone playing bass at the jams so I bought one and started learning to play. Then no one was playing the harmonica part for ‘Last Dance with Mary Jane,’ so I bought one and learned the part.”

These days he plays ukulele, guitar, bass, a little banjo, harmonica, cajon occasionally and “some keyboard.”

Before the pandemic Williams hosted open mic and music events at several local venues: “COVID really changed everything with businesses shutting down. And when they did open back up some didn’t have enough disposable income to hire musicians to start. Now things have opened back up and the businesses are doing better. But some of the musicians are still staying away.”

Currently Williams hosts open mic at A.J. McMurphy’s every Monday night from 7:30pm until 10:30 or so: “It’s a very laid back atmosphere with no pressure. Everyone is welcome to bring friends and family, sit down and have a meal and a couple of drinks, and just enjoy the night.”

Williams says he enjoys meeting and talking with the people that come out: “One of the parents of a girl that came out to the open mics said to me ‘You are the biggest schmoozer I have ever met!’ This basically means I work the crowd and I try my best to make everyone feel special, whether they are there supporting someone or if they are performing.”

“I also love being able to help out and work with the musicians I call my ‘Young Guns,’ which are the younger singer/musicians.” he says. “I guess that probably comes from being a teacher for so many years. It’s rewarding to see them grow up as a person and singer/musician and know I had a hand in it. Some of them are in college studying music or performing arts. Several are trying to make it in Nashville. One is now recording there and is sponsored by a well-known guitar brand and a couple of other guitar accessory makers. I had the pleasure of being able to play bass for a young man on the EP he put out of all original music. Some are working on cruise lines, some work their summers at theme parks. And it’s always nice when they come back and say hello.”

Williams also plays solo out and about at many local venues, describing his style as easy-going and eclectic. “I try to read a crowd and play a few I like,” he says, “and see how they respond and then go from there. I play anything from James Taylor to 3 Doors Down to Matchbox 20. And styles ranging from ballads, pop, blues, to rock. So, I’m all over the place. But anything from the Eagles, Tom Petty, and Jimmy Buffet is always a crowd pleaser.”

When writing original music, Williams says it’s easier for him “when the lyrics come into your head first and then you wrap the music around it.”  Some come “fast and furious” while others, “not so much.”

What advice does the seasoned musician offer newcomers to open mics? “Be yourself. Talk with and support the other performers. Pick their brains for info. If you need help, ask. That’s what I am there for, whether it’s setting up the mic, setting the sound, giving advice or if you need someone to accompany you.”

And perhaps most importantly, he says, “Don’t forget your roots, stay grounded, and if you feel I helped you in any way, pay it forward.”