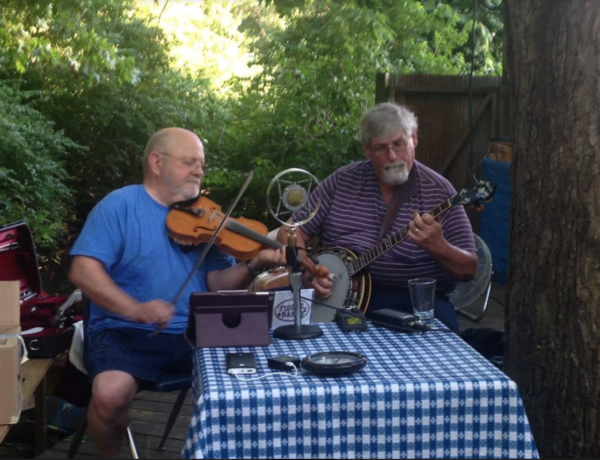 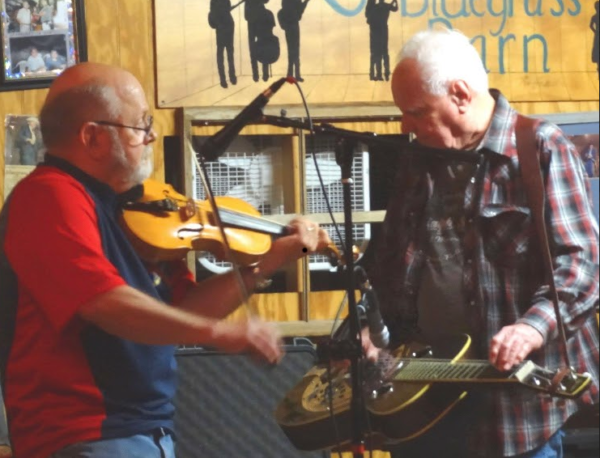 Fiddler Clyde Williams is new to the area, but not to music, and bluegrass in particular. Known on stage and radio as Dan O’Day, he relocated from Springfield, Missouri to Winterville in 2017 but has already carved out a niche for himself locally. But he wasn’t just fiddling around…he had the right equipment to gain acceptance: rosin, bow…and a violin with attitude.

“I was fortunate to meet three people only a few days after we moved here,” Williams says. “Buddy Zincone, Lane and Sarah Hollis  played at a church one Sunday afternoon. Sometime later Buddy invited me to his home to pick and I eventually joined his group, ‘The Tar River Boys.’ Because of Covid-19 I have not seen Buddy since last March.”

Through those first few acquaintances, his circle expanded even wider, including Dr. John Morrow and others. “Bob Gaddis has become a family friend and has mentored my son’s beekeeping,” Williams says.

Williams explains that the bluegrass world is a tight circle. “Before I left Missouri, I played with Bill Bryant, a transplanted Virginian whose friend Doug McDonald from Dunn N.C. played in the group ‘Willow Branch’ out of Smithfield, VA.  My first North Carolina gig was at R. A. Fountain, sitting in with “Willow Branch” in 2018.”

Williams and his wife, Anna, relocated to the area to be near their son, Jarrod, Professor of Tuba at ECU.

“I heard through the grapevine that Sarah Hollis was no longer playing with Highway 58, so I took it upon myself to contact Clyde Mattocks. Katie Springer had joined the band, but lived a long way off and so essentially, I became the ‘rehearsal fiddler’ for Highway 58,” Williams says.  “Don Dunn, the mandolin player, and John Booker became good friends as did Danny Grant the banjo player. And Clyde Mattocks is an East Carolina legend.”

That’s when already having an alias came in handy, or else there would have been two Clydes in the band.

A veteran broadcaster, Williams used his given name when he started radio in 1963 at a 1000 watt AM station in Willow Springs. Then he moved to Springfield in 1966 for a radio station that played a lot of Sinatra, Sammy Davis, Jr and Dean Martin. “Sinatra’s favorite ‘put down’ was ‘Don’t be such a Clyde’,” Williams remembers. “So, I took the ‘air name’ of Bill Williams.” Williams enlisted in the Army in 1969 and while he was away, the biggest TV station in the city hired a new anchor and his name was….Bill Williams. So when Williams came back in 1972, the program director suggested yet another name change based on his radio hero, Don Day. “So we took that name and made me Irish!” Williams remembers. “Since then, to nearly everyone outside my family, I’m Dan O’Day.”

Williams grew up in a musical family. “In the 1920’s my dad, David, and his cousins Bert and Floyd Williams played dances around Howell and Douglas County, Missouri for years,” he says. “Dad played guitar, Floyd played banjo, and Bert was the fiddler. Dad’s nickname was ‘Preacher,’ Floyd’s was ‘Skinny’ and Bert’s was ‘Bull.’”

Williams was the seventh of seven kids. “All my brothers played and sang,” he said. “Joe and John (guitar and mandolin) were the first musicians to perform live on KWPM radio in 1947. They were later joined by my two other brothers…Paul, on bass and Roger on fiddle. The Williams Brothers had a big following in North Central Arkansas and South Central Missouri because of that station.” Their competition for audiences, he explains, was Porter Waggoner.

Then the Korean War broke out in June 1950. “My brother Paul was drafted that fall and that was the end of the family band,” Williams said.

Williams’ brother, Roger, who was 10 years older, had a major influence on him. “Roger was my hero,” he remembers. “He was thought to be the best fiddler in South Central Missouri. Anything he did, I wanted to do. When I was about 10 years old, he started teaching me how to play the fiddle. He volunteered for the Army in 1958 when I was 12. He gave me a fiddle when he left. I still have and play that fiddle.  One of our favorite tunes to play was a tune that only cousin Bert played, but never named.  My brother John called the tune ‘Old Bull.’ I’ve never heard anyone else but us Williams play it.”

The music Williams enjoys playing most is bluegrass, but he is very specific: “the style of Paul Warren and the fiddle players of the Foggy Mountain Boys.” He says “a hoedown fiddler” best describes him.

Williams (or should I say O’Day?) combined his love of bluegrass with radio by hosting two bluegrass radio shows for several years before retiring in 2010. Then he helped form the Greater Ozarks Bluegrass Society and produced a TV show.

Through the years Williams played in a number of bands, beginning with a stage band for KGBX, “Farmarama.” It featured guest appearances by touring musicians such as Bobby Bare and Jimmy C. Newman. He was on hiatus for a number of years while focusing on the radio business, but  before relocating from Missouri Williams formed “Fiddle and Banjo,” a Scruggs-Warren tribute duo with Roger Matthews.

Favorite tunes to perform these days are “Cherokee Shuffle” by Tommy Jackson and a song Williams wrote, “Betsy’s Waltz,” named for his granddaughter. But of course the pandemic silenced most public performances.

One can’t help wishing for an opportunity to see Clyde Williams and Clyde Mattocks perform together again, to which we’d surely say, “When Clydes collide, O what O Day! 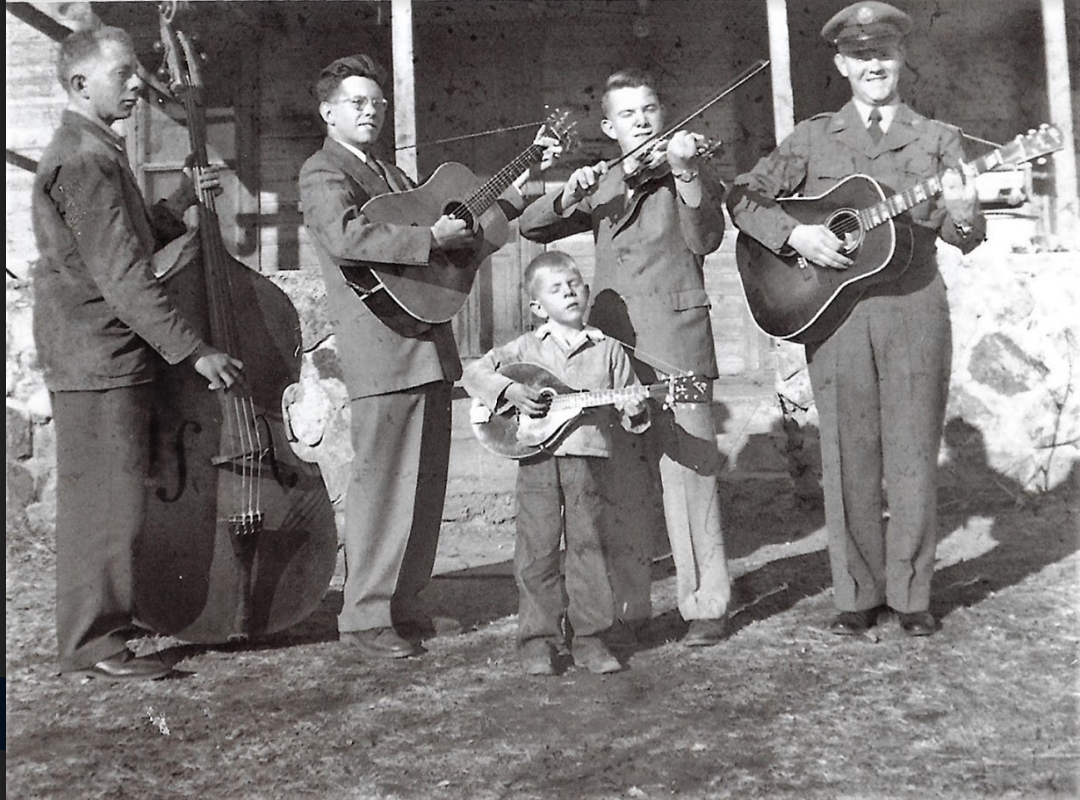 Clyde’s up front in his family band