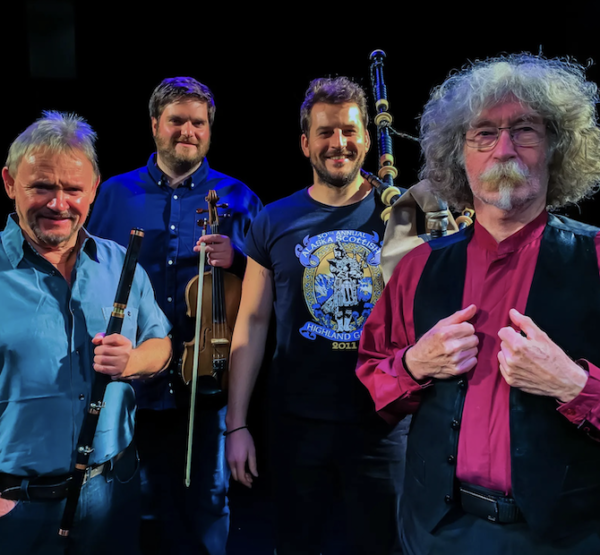 In the Wright Place, a peck of piper music

In the Wright Place: Tannahill Weavers play a peck of piper music 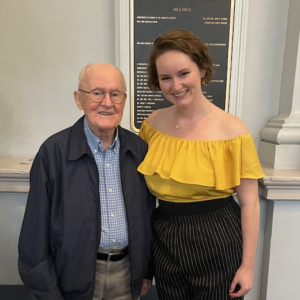 Wright auditorium was charged with anticipation as a parade of umbrellaed puddle-jumpers scurried through April showers to make their way to the Thursday evening concert. The headliners may have been ensconced in a green room backstage before curtain time, but there was no shortage of celebrities milling about. Rudy Alexander, for one. Spotting the man behind the name of the S. Rudolph Alexander Performing Arts Series may quite possibly be like seeing Dolly Parton at her own theme park.

The Tannahill Weavers, formed in 1968, became known as one of the first popular bands to incorporate the sound of the Great Highland Bagpipe in an ensemble setting. Sitting on one of the front rows, right, put an audience member close to eye-level with the piper’s feet. That is, in full view of his red tartan plaid pleated kilt along with kilt socks, worn above the calf and two-fingers width below the knee, equipped with sgian-dubh (small knife as part of the Scottish Highland dress). A small table at his side held the bagpipes when not in use, a powder he used to dust his hands with in preparation for playing, along with violin, and penny whistles. The piper, Iain MacGillivray, carries on the family tradition; his father and grandfather are former world champions.

Lead singer and guitarist Roy Gullane was a Mark Twain doppelganger, with a generous shock of hair and mustache shining whiter under the lights. He served as the band’s master of ceremonies, offering stories and quips in a charming brogue that was only slightly harder to decipher than that of eastern North Carolinian southern drawls.

Phil Smillie began the evening performance under the radar, playing lovely accompaniment on flute and penny whistle. But when the opportunity came to offer harmony vocals, the rosy complexioned musician came into his own: causing eyebrows to raise along with the notes of his soaring tenor.

The primary fiddler (at times the piper played second fiddle), Malcolm Bushby anchored the left side of the stage. He looked neither left nor right, but approached the music with serious concentration and confidence.

“And now a cheerful tune about the devil coming to town and running off with the income tax collector,” Gullane offered as an introduction to one song.

Before another, “When the Kye Come Hame,” he encouraged audience participation: “If you’re unsure of the words, we’ll teach them to you. If you’re still unsure, make a series of noises …that’s what we do.”

And the audience did make attempts. On another song written from the perspective of a fisherman’s wife, Gullane said, “This one’s real easy…it’s in English..” The deputized choir began strong, belting out, “Pity the heart” with gusto, before trailing to murmur when less confident of the words.

“I’m not asking you for a kidney–just to join in on the chorus!” Gullane chimed.

He described a “transportation ballad,” a genre about “exotic places like Barbados…and Virginia” before launching into “Jamie Raeburn’s Farewell,” the tale of a man shipped off to a penal colony in Australia.

Speaking of his family members and the rich tradition of ship building, Gullane said his uncle, a riveter, had the nickname of “Genie,” because every time someone got out a bottle, he appeared. The shipbuilding industry had a lot of safety issues in those days, so it wasn’t unusual for workers to lose digits. His uncle’s friend was called “The Clock” because he had one big hand and one little hand.

“Always stick with what you’ve got, lest you end up with something worse”: Gullane said he heard that one from his grandfather and he hoped he wasn’t trying to traumatize him. “He also said, “’Never hire an electrician with no eyebrows.’”

Gullane invited the audience to visit the band’s merchandise table that he said was “groaning under the weight.”

“It’s been a tough couple of years for musicians,” he said. “My back’s been out more than I have.”

He described their attractive return policy: “If you buy something from the table, take it home and if you don’t like it…package it up and send it back, and we’ll send you something we don’t like.”

But the band and audience seemed to be members of the mutual admiration society. “Thanks for supporting live music,” Gullane said. “Hopefully we can come back and play for you again.”

After exiting the stage to a standing ovation, the band returned to offer a couple more musical morsels to a hungry audience, culminating in “Auld Lang Syne.”

The audience filed out, embracing their real or imagined Gaelic ancestry. Like the Mark Cohn “Walking in Memphis” lyrics, if anyone had asked, “Are you Scottish?” the answer would have universally been, “Ma’am, I am tonight.”