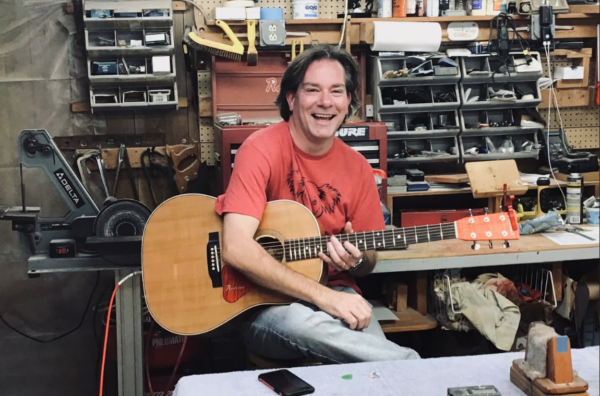 “I play songs you know and songs you ought to know.”

Local musician Patrick Reid explains that while it might sound “snarky,” that’s what he likes to tell people. “I play what I listen to – which is a very wide range of decades and genres. It’s all about having some kind of personal connection with the music that I can hopefully share with those listening,” he says. “I hope folks discover new artists through me.”

Reid, “born and bred in eastern North Carolina,” can be seen performing with his guitar in local restaurants and bars. These days his instrument of choice is often one of John Bradley’s famous Redneck guitars.

He explains his motivation: “Like most kids, I grew up wanting to be a lot of things: a police officer, a firefighter, a mechanic, and a rock star. The rock star dream never left.” He sees himself as a “weird mix of outgoing and shy.” Paradoxically he is uncomfortable with attention, but also craves the spotlight: “Performing – whether it’s music or local theatre – gives me the chance to turn on that inner rock star and bask in the spotlight for a few hours before withdrawing back into my ‘that was awkward’ hole.”

He finds it funny that he gets to go perform for three hours and work an audience, feeling on top of the world, before coming home and loading the dishwasher or reading a bedtime story to his youngest.

Reid says when he was growing up, his siblings were big into music. “My brother is 9 years older and was very into hard rock and heavy metal. He was the AC/DC, Motley Crue, ZZTop influence on me.”  His sister is also older and was the pop influence.

He remembers from a young age hearing AC/DC, singing along to “Thriller,” and playing air guitar to Twisted Sister. “My first album was ‘Chicago 17’ and my first single was ‘Ghostbusters.’ I guess I’ve always been all over the place musically.”

Guitar is Reid’s main instrument, but he confesses, “I cheat more than I should, but I’m at an age that I make it easy for myself.” He qualifies the rest of his musical arsenal, saying he “dabbles” in a little mandolin, plays  harmonica “in a pinch” and “does the basics” with bass. “I have a drum kit,” he says, “but I struggle to get all four limbs doing different things at the same time. I’m also working on achieving a level of mediocrity with the banjo.”

Some years ago Reid combined his love for music with journalism and gained access to some notable musicians: “I once hung out in Steve Earle’s dressing room after a show as he just sat there shooting the breeze with some friends. He never questioned who I was or why I was there. Meanwhile Buddy Miller (Emmylou Harris’ guitarist) was wandering in and out.”

And the devil is in the details: he got to meet Charlie Daniels several times: “Once he gave me a guitar lesson on one of his songs, but I was too awestruck to remember it.”

Almost every gig he plays includes something by Billy Joe Shaver. The first time I saw him, he was hanging out on the sidewalk out front after the show,” Reid recalls. “We asked for a picture, and he threw my buddy into a headlock while we snapped pictures. He was such a neat guy, but not at all pompous about it.”

He admits he likes to brag about meeting Susanna Hoffs from the Bangles: “As an adolescent I had always had a huge crush on her, and meeting her in person was the stuff dreams are made of. Guys of my age are always jealous when they see the picture of us together.”

Reid is probably known as much for his gregarious audience engagement as for his singing, including the odd one-liners. Such as “Now I know what a smattering of applause sounds like.” (Stolen from Ray Wylie Hubbard, he confesses.)

Instead of rotating the same set lists, Reid says he likes to keep it fresh, adding new songs all the time: “Right now I love playing Steve Earle’s ‘Galway Girl’ because there’s a neat little riff that I dig and because I like the emotional arc of the lyrics. Rod Stewart’s ‘Stay With Me’ is a recent addition that I really enjoy because I never expected to be able to do a respectable version of it.”

Achieving work-life balance is important to him and Reid says it helps that in real estate he doesn’t have a 9-5 desk job. “I’ve taken a break at a gig before and used it to wrap up a deal for a seller.” Juggling family is harder, he admits, and credits his wife, Emily, for being so supportive: “She has done community theatre with me, and she knows I need this outlet. She is very forgiving of the time I spend out performing. However, she also knows that my family is a priority.”

Reid’s set list style is so distinctive, though, that it has inspired the coining of new terms in his name. Fellow musician Brian Burke jokes about how he will take a band everyone knows but play some obscure song by them that no one has heard.

Like this: “There was a band in the 90’s called Fastball,” Reid says, introducing a song. “They had a huge hit called ‘The Way’ that everyone has heard because it was played on radio nonstop. They had another smaller hit called ‘Out of My Head.’ This is neither of those. This is a Fastball song called ‘Fire Escape.’” 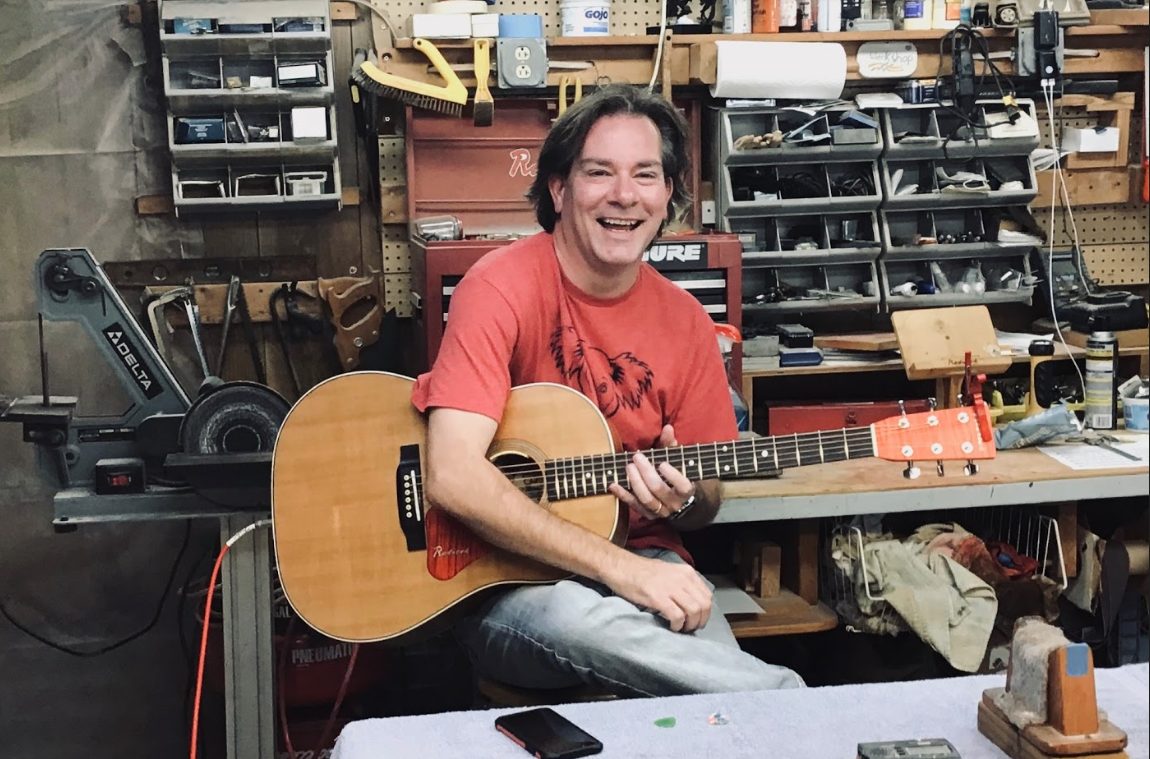