With a Little Help from His Friends

Guitarist J. D. Joyner Enjoys Performing with a Little Help from His Friends

It has been a couple of years ago now, but I remember it vividly. I convinced my reluctant side-kick to accompany me to The Turnage Theater in Washington to see an act billed as “J. D. Joyner and Friends.” Like I often do when I’m not familiar with an artist, I checked Youtube to get some idea of what to expect. And I heard J. D.  play “Mr. Bojangles” on his guitar. That was enough for me to pull out all my powers of persuasion. “You’ll like it…trust me,” I told my husband. His look was doubtful and his spirit exuded long-suffering accommodation.

But then J.D. and his friends started playing the songbook of my stoic-chemist-of-a-husband’s glory years, including Bread’s 1972 hit, “Diary.” And I watched the coerced concert-goer melt like homemade strawberry ice cream on an eastern Carolina tongue. The opening line “I found her diary underneath a tree,” drew immediate recognition. “David Gates!” he stage-whispered animatedly. When the song ended, he raised his hands over his head to clap. He clapped like a person trying to multiply himself with a clapping frenzy. And one song after another drew a similar reaction. He was transformed from I-can’t-believe-you-drug-me-here to That-guitar-is-slicing-Bread.

So when J.D. Joyner says, “When I perform I want to make people happy and move them emotionally… that is my goal,” I can tell him from personal experience, he achieves it.

“He’s smart,” I remember telling my husband as we drove home after the concert. “He’s obviously a great guitarist…anyone can hear that…but not everyone can sit still for two hours and listen to a technically precise musical performance. We have the attention span of gnats.  He’s making his talent accessible by playing some of the most beloved songs of all time. And ones that you don’t often hear anymore.”

And that’s how I became a J.D. Joyner fan.

As it happens, it was a special performance that inspired him to learn to play the guitar in the first place: The Beatles on the Ed Sullivan Show. “I loved the cool sounds coming from their guitars and wanted to play.”

He was influenced by Les Paul, George Benson, Chet Atkins and Tommy Emmanuel mostly. He was 19 years old when he met Les Paul and saw him perform up close. “I didn’t know that one person could play all those parts at one time. Les Paul sounded like a complete band by himself. I was hooked and wanted to learn how to play like he did.”

And his influence is apparent in J.D.’s guitar performance, which spans several styles, including jazz, R&B and fingerstyle solo acoustic.

But guitar playing isn’t all about performance prowess for J.D. He tells about going to Sri Lanka in 2004 after the tsunami devastated many islands, to help rebuild some of the homes that were destroyed. The rebuilding was in a jungle area and one day the local pastor brought a guitar and asked him to teach some of the musicians in the area. “For several nights, I taught guitar using an interpreter. I received more than I was able to give: it was a life changing experience.”

Like so many other musicians, J.D. has missed playing for people during the pandemic. He has stayed musically engaged by learning new tunes and rearranging some he already plays.

One of his favorite songs to play these days is “Sails,” by the group Orleans, due to its “great melody.” 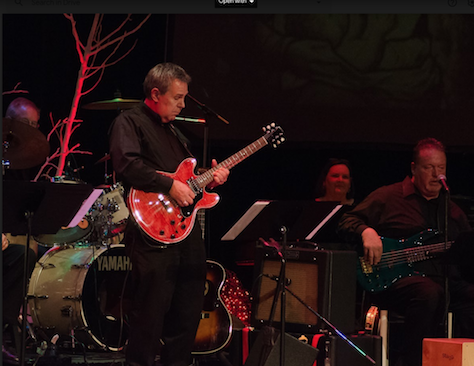 He has written instrumental songs for his daughters, Sarah and Natalie, his granddaughter, Chandler, and his wife, Diane. “My wife has supported and encouraged my music career sacrificially over the years.” “Chandler’s Lullaby” was completed and recorded two days before she was born. “I would say that it is difficult to compose originals but very gratifying to perform songs that come from the heart. The people you love can inspire you to be creative.”

These days the “friend” J.D. has been performing with as a duo is Clay Steinwinter, most recently playing at the Wine Crate in Washington. J.D. plays for weddings, private and corporate events, and Arts Centers across the Carolinas. He also plays with Steve Creech jazz night at CPW’s occasionally, and a group of “A list musicians” called “Guitars and Friends” based in eastern North Carolina.

J.D. explains that his “day job” as a residential home appraiser keeps him very busy, but his passion is playing the guitar.

J.D.’s signature guitar might be best known for “gently weeping.” But when J.D. plays, it is apparent that more than anything else, his guitar evokes tears of joy.