From murder ballad to ragtime, gospel to jazz and blues, the music of Lightnin’ Wells can be described as, well…striking. His persona is distinctive too, marked by a shock of curly hair, a shirt louder than his music, and feet clad in sandals or nothing at all.

Locals may not realize his national renown, breathing new life into Appalachian music and 1920s era pop tunes. He has released six albums, including the 2017 O Lightnin’ Where Art Thou? Alex Albright describes him as having an “encyclopedic knowledge of local music history and eastern North Carolina recording operations.”

But of course we must know. How, exactly, did Michael Wells acquire a moniker like “Lightnin’”?

“I got the nickname Lightnin’ when I was a young teenager,” he explains. “I was being slow at some kind of task and was hearing comments like “Come on Lightnin;” “Hurry up Lightnin.’”

But the sarcasm has served him well.

“Nearly everyone in Chapel Hill called me Lightnin’ the whole time I lived there. I tried to lose the name when I moved to Greenville but it followed me and wouldn’t leave. I have learned to live with it and love it.”

“I wasn’t too much into sports or playing ball, so every day when school was over I was in my room with my folk music records playing the guitar. By the time I was in high school I had learned to finger-pick and was messing with lots of different instruments including the banjo, mandolin, autoharp and even the fiddle,” he remembers. 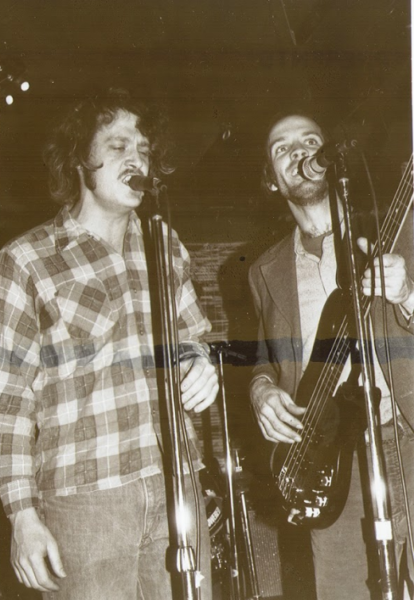 Lightnin’s roots run deep in Americana music, but also in eastern North Carolina. He was born in Wheeling, West Virginia, but his family moved to Goldsboro when he was 10 years old. He has a degree from UNC Chapel Hill and one from ECU, and spent 12 years working in Greenville at the Regional Rehabilitation Center as a recreation therapist.

Lightnin’ describes his genre of music as “older styles of American music from the beginning of the last century.”

“I started out basically playing acoustic blues with a strong emphasis on the old regional styles of Carolina blues, often now referred to as Piedmont Blues,” he explains. “Piedmont Blues usually involves a finger-style guitar accompaniment and a musical style influenced by ragtime music and a strong rhythm appropriate for dancing as well as the other melancholy aspects associated with blues music.”

He found that in playing for general audiences, variety is a good thing. So he enjoys mixing other older musical styles with the blues including the Appalachian old time music, pop tunes from the 1920s, and gospel tunes. And upbeat humorous songs are especially helpful to offset the more somber pieces like the murder ballads.

Besides performing music he is also involved with various aspects of older music as a collector, writer and promoter of older traditional musicians.

“My latest project has been writing a series of liner notes for two CD reissue projects from Bear Family Records of Germany involving the Colonial and Renown record labels; both of which recorded North Carolina artists during the late 1950s,” he explains.

Lightnin’s performance credits are extensive, from a spectrum of international festivals to North Carolina’s famed Merlefest. But a memory from playing in Germany stands out. “The Germans are so nice and polite, when I would ask how long I should play during a performance, they would say ‘Oh, as long as you want.’”

He noticed that he was getting encores each night he played. “I asked my German friend if every musician got an encore and he said that they usually did unless they were really bad. I love to play over there.”

When asked about his favorite songs to play these days, he said, “Whatever song I’m learning at the time is my favorite song as well as the ones that I choose to play. If it is not worthy of being a favorite song, I probably wouldn’t learn it.”

Lightnin’ describes the pandemic as a “great equalizer” in how it has treated musicians. “Even Bob Dylan isn’t touring,” he said. Although it “threw a whammy” at him, causing gigs and travels to be cancelled, he shares about staying musically engaged, but from his home. “I have participated in a virtual musical performance in Chapel Hill and a home based recording project, and I play some every day because it is what gives me pleasure. It has also given me time to be more involved with my record collection and to learn some new (old) tunes.”

Lightnin’ looks forward to North Carolina ending Phase 3 and having the opportunity to perform locally again at R. A. Fountain General Store, his favorite place to play. He is likely echoing the sentiments of many musicians when he declares, “I’m itching to perform live again.”