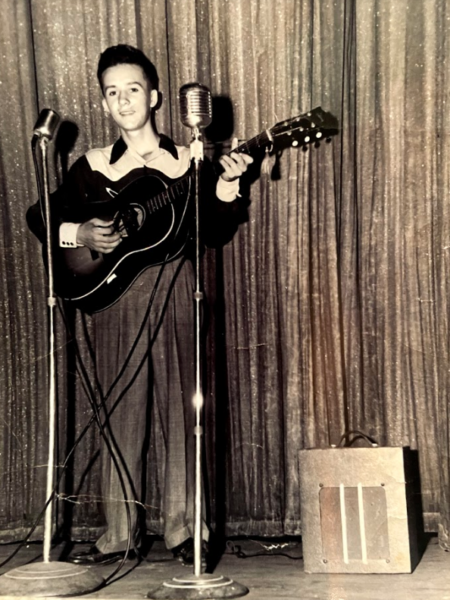 The Storied Life of Rudolph Winstead

Eighty-six year old Rudolph Winstead, known to friends as “J Thaddeus Toad” (or “Toad,” for short) settles on a stool with his guitar, introducing his first song. His voice rings out, smooth and strong. “I’m Walking the Floor Over You.”

He earned his nickname, he explains, because he had trouble remembering people’s names, so he would just call them “Toad.” And folks turned it around on him. “I added the ‘J. Thaddeus’ to up the game…I thought it sounded important,” he said.

“I’m old, so I play old songs,” he says. He follows his first number with“Blues Stay Away From Me” and “Melt Your Cold, Cold Heart.” 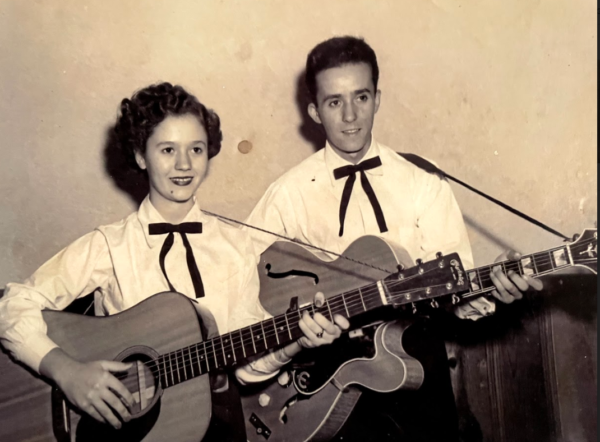 Toad’s stomping grounds are in Nash County, but anyone who was in Greenville in the 1950s might remember him and his sister from “The Jewel Box Jamboree” with Sammy Bland on WNCT-TV. Folks from Rocky Mount may recognize him from WCEC radio station….or in more recent years, (before COVID) playing country and gospel tunes every Thursday from 3:00 to 5:00 at the Hardees across from Lowe’s. Because of its location, his daughter, Celeste, said that some people call them the “Highway 301 Opry Band.”

And he’s not only a musician, but a storyteller. The stories are of a life well-lived.

“I was born in Nash County at 9pm on September 12,” Toad says with startling precision. But musically, the story began when he was in the seventh grade.

“I’d always been small. At school, when they got ready to choose teams to play ball, me and another boy always got picked last because they figured we couldn’t hit the ball past the pitcher’s mound,” Toad says. “I didn’t want to play ball no how. I told Daddy that Eddie Pridgen had a guitar and had showed me a few chords. I asked him to buy me a guitar.”

His daddy told him he’d buy him a cheap one, and if he learned anything, he’d buy him a better one. He bought him a brand new Harmony guitar in 1947 for 16 dollars and a half.

“I learned a few chords, but back in them days, in country music, most songs didn’t have but about 3 chords in them…once in a while you’d have a song that would go to the fourth chord.” Toad said. “Nowadays sometimes you have to change chords every three words, just about.”

Eddie Pridgen and the Riverland Playboys

By the eighth grade he was taking his guitar to school and he and his friend Eddie would play a song during the time for “oral reports.” His teacher got him an audition with Ray Wilkerson, the program manager at radio station WCEC in Rocky Mount.

He remembers: “We got my sister (who played the piano), Eddie’s brother Bob, who played stand up bass, and we went down there and sang three or four songs. He put us on the radio every Saturday from 3:00 to 4:00. There wasn’t nothing else to do, before TV came out. Every Saturday the radio station was just about full of people to come in to listen. Most of them were girls.”

Listeners would also mail in cards with song requests handwritten in cursive:  Like…“Have Rudolph sing ‘A House Without Love’…don’t disappoint us.” or “Have Rudolph sing ‘A Heart full of Love’ for Betty, Marie, Rebecca, Margaret, and Shirley.” The cards would be signed creatively, like “Cute Chick,” or “Brown Eyes, Blue Eyes, and Shorty.”

The band would sing around one microphone. Despite his sister being a part of the group, they became known as “Eddie Pridgen and the Riverland Playboys.”

“The reason the ‘Riverland’ got in there is because I stayed on the north side of the river and Eddie stayed on the south, about a mile apart.” Perhaps it’s best not to ask how the ‘Playboys’ part of the name came about, but Toad admits to an affinity for blondes.

At the time the band was on the radio, Toad was too young to have a driver’s license, so his father had to drive them to the station every Saturday. On Friday and Saturday nights Toad and Eddie also played in Buddy Baker’s Dance Band, at square dances in Middlesex and Spring Hope. “We’d start at nine o’clock at night and play until twelve. Between the square dances we’d play what they called a round dance, a boogie or a waltz.”

After the square dances ended, they played at the Pack House Jamboree in Wilson on Saturday nights.

By about 1949, Toad’s father must have decided he’d learned something, because he bought him a better guitar: a Gibson for $66.50…and he still has it.

He remembers the first time he got paid for playing guitar. It was with Pete Winstead (no relation) playing electric lead guitar, Toad on rhythm guitar, and his daddy on fiddle. The country store owner liked them because farmers would linger and buy more RC Colas and moon pies. So when they finished, he paid the band in nutty buddies. “I said anytime you got paid, you’re a pro, ain’t you?”

Sammy Bland and the Folk Caravan

Sammy Bland, then a DJ at WCEC and in later years known as a racing broadcaster and for his TV shows with Witney the Hobo, would open some doors, musically, for Toad.

“When we were singing on the radio, Sammy got where sometimes when the program was over he would come in there and want to sing a song, and we’d play for him. The next thing I knew, he wanted to make a record. So me, and Eddie, my sister, and Sammy went to Philadelphia to the Gotham Record Label and made a record. It was an old 78. We recorded four songs that day, but you don’t put but two on the record.” “Carolina Tears” was on the A side, and “My Kind of Girl” on the B side.

“Then seven years ago I found out that somebody went back in the storage room and picked out another one of the songs we recorded, “I Just Heard the News,” and put it on a CD with several other artists,” Toad said.

“Mustard and Gravy,” a comedic radio duo from Wilson was one of  the other artists put on that compilation. “Mustard” was Frank Rice and “Gravy” was Ernest Stokes. “Frank ran a men’s clothing store in Wilson. They were on the radio about every week,” Toad said, “They wound up in the movies.”

Then in the 1950s, Sammy Bland got a show on WNCT-TV in Greenville sponsored by The Jewel Box called The Jewel Box Jamboree, including Toad, his sister. and the band, then known as “The Folk Caravan.”

He remembers that he made more money playing gigs in high school than after graduation, when he got his first real job.

But the stories Toad likes to tell most involve his wife of 63 years, Betty Rose, who passed in April this year. When he first saw her he said “That blonde is a good looking thing.”

He went to a gospel sing with Wally Fowler and the Oak Ridge Boys and spotted her there. “I tried to get her to let me take her home and she said ‘My Mama’s coming after me.’ Sure enough, I followed her out and her Mama was sitting right there in that ‘48 blue Plymouth right in front of the door. I walked her to the car and opened the door for her. She messed up my mind the first time I ever saw her. That’s the reason I ain’t right now.”

The Night Toad Walked Out on Elvis

Toad’s story involving the King of Rock and Roll might be the finest example of how smitten he was. 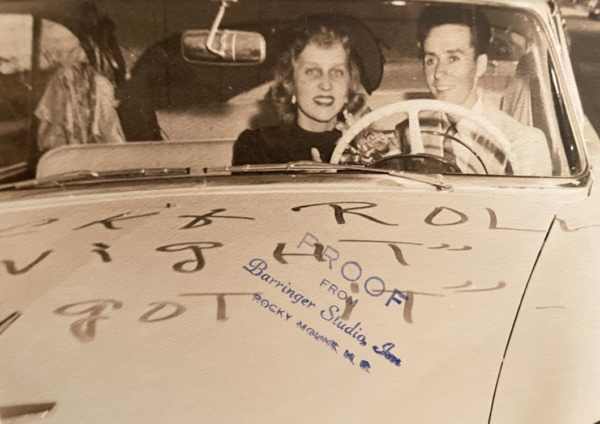 “It had to be 1955, because I had just bought a 1955 Ford Victoria…black and white. Black on the bottom, white on the top and the middle. Hawkshaw Hawkins and Cowboy Copas was going to be at Wilson at the ballpark. They were two of the top country music stars at that time. And I wanted to go,” Toad remembers.

“So I asked Betty Rose about going with me. She had to ask her mama, because it was country music and her mama was a Sunday School teacher and she didn’t want her out there doing things…that I might be doing. But she let her go. We went over there about an hour and a half early, got a good seat up front. When the program started, the announcer came out and said, ‘Before we have our stars come out we’re going to have a young fellow come out and do a few songs for you. I want you to make him welcome.’ He called his name right out, and nobody had heard tell of him. He got a little bit of clap, you know. He came out and started singing and twisting a little bit. “

That’s when, about three-fourth’s way through the song Betty said, “I think we need to leave.”

“I said, ‘What for?’ She said, ‘Because he’s vulgar.’” Toad remembers as clearly as if it happened last week.

He remembers with the second song, it got a little worse.

“She said, ‘I just can’t sit here. If Mama knew I was watching this, she wouldn’t ever let me go nowhere else with you.’ I said, ‘Okay, we’ll leave then.’.”

“So we got up and left, got back to my car, and both the front hubcaps on my new car had been stolen. I lost the price of the tickets, I lost the time of seeing the country music stars, and walked out on Elvis Presley, all in the same night.”

“I told people over the years not to pay Betty Rose no mind…she’s not a good judge of talent.”

The Rest of the Story

Glossy black and white photos of Toad looking very much like a heart-throb musician, with his shiny hair and snazzy attire are carefully preserved. Boxes include postcards and other memorabilia that commemorate a lifetime of playing music.

Yet Toad looks at them and says reflectively, “I sang in the choir at Calvary Baptist Church I reckon 20 or 25 years. From 1968 to 1976, for seven years, me and my wife led the youth choir…and we had 72 in it. I think we had 17 at the first rehearsal. One of the highlights of all my music was that choir. I enjoyed all that other, but it seems like that takes first place.”

And Toad’s story as a musician suddenly transforms into a testimony that’s not about performing on the radio, recording records, or being on television. It’s a story about priorities and investing in others. And thankfully, it’s a story that’s still being written. 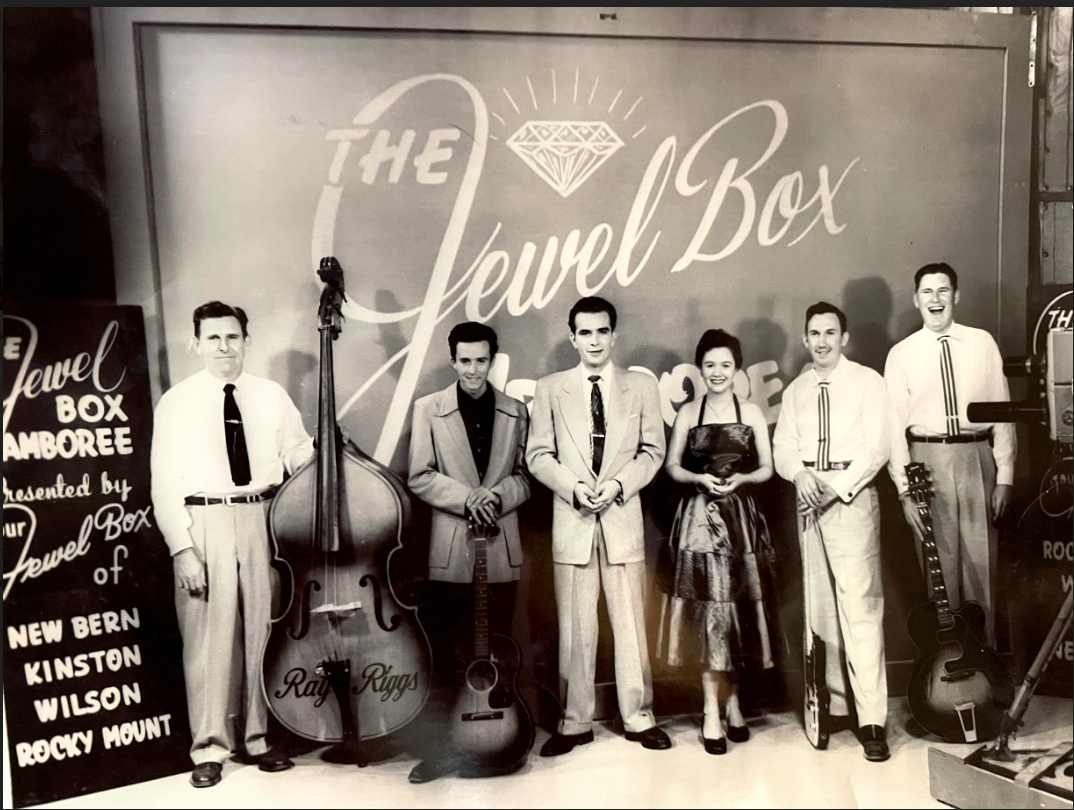 All photos courtesy of Rudolph Winstead