How does a musician go from putting his guitar under the bed and declaring, “I’m done” to being named the #1 entertainer in downtown Greenville?

The story begins with a little boy growing up in Greenville. 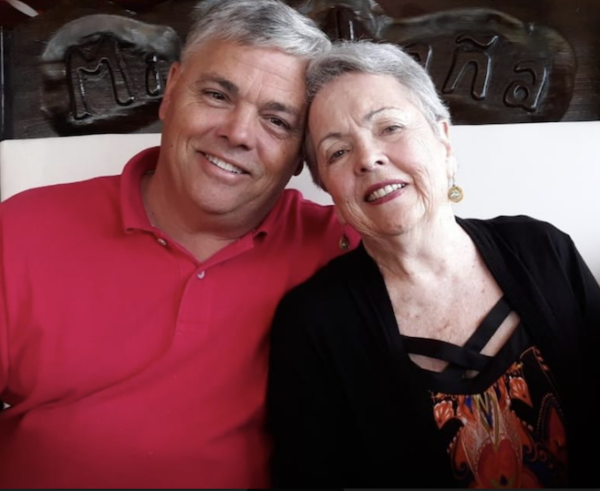 “ I was watching Glen Campbell, who was my inspiration,” Victor Hudson recalls, “and my mom said, ‘Do you want to learn to play the guitar like that?’ I said, ‘Yeah.’ I was five years old,” Hudson remembers.

His mother went up to the attic and brought down a white fabric drawstring bag and pulled out a ukulele. She knew how to play it. “She said, ‘I’ll tell you what. If you learn to play this ukulele and sing to me, I’ll get you a guitar for your 6th birthday.’ And I learned to play ‘Five foot two, eyes of blue/ But oh! what those five feet could do/ Has anybody seen my gal?’” Hudson sing-songs the words he still remembers vividly from his childhood.

“I got a guitar for my 6th birthday. And my mother always supported my music. She influences me to this day,” Hudson adds. “That little old ukulele that she kept all those years, maybe she was hoping that one of her children would take an interest in music and she could pass it down. I mean, there was nothing special about it. The body was kind of split in half but you could play it.”

He played instruments in school starting from the 6th grade including trumpet, then violin, trombone, guitar, and bass guitar: “All the way through high school and college I played in the jazz ensemble and the pep band. Jim Rogers was nearing the end of his work at Rose High School when I played there but he had a huge impact on my life. I wish I could hug his neck, and if he were here, I would.”

When it came time to go to college, Hudson came close to majoring in music but was nudged by his father towards a career he thought might give him something to fall back on: business. After ECU he went to Campbell University, where he met Jack Stamp, who had been a music instructor at ECU. He was a songwriter and percussionist and wrote a lot of the music the ECU Symphony plays. Many years later Hudson was at an ECU football game and the announcer said, “Ladies and Gentlemen, we’d like to perform ‘The Star Spangled Banner’ as arranged by Jack Stamp.” Hudson say, “A rush of emotion came over me. The arrangement was so beautiful. So I had some great musical influences in my life.”

After finishing school at Campbell, Hudson played bass guitar in a college band called “See You.” The name was a takeoff on Campbell University, “C U.”

“After about a year of that I realized it was time for me to get serious about earning a living,” Hudson says. “At that point in my life I literally kind of gave up music. I put my guitar under my bed. And I didn’t get it out much at all. I quit. I was disenchanted.”

Three or four years later, a neighbor and friend, Randy Baker, asked him to play his guitar on the patio for a get together.

Hudson recalls: “Randy, I’m done. I don’t want to play my guitar for anybody. And he said, ‘You know, you have a talent. And you’re being a complete jerk. Why don’t you get your guitar out? I’m going to ask you one more time. And come play for our group after dinner.’ And I did.”

That night in the early 1990s a Greenville restaurateur named Mickey Muns was there. He ran a place called Granddaddy Rosers. He told Hudson he wanted him to play at his nightclub,

“I said, ‘Mickey, you just heard the 3 or 4 songs that I know how to play. How long would you want me to play?’” Hudson remembers. “And he said ‘3 or 4 hours.’ I kind of did the math and I said ‘Mickey, you’re talking about me having to learn 40 or 50 songs in order to do that. That’s just too much.’ He pulled his checkbook out that had the little calendar on it and said, ‘How long would it take you to learn 40 or 50 songs?’ I said, ‘Mickey it would take me 90 days–3 solid months of applying myself.’ And he circled the 90th day from that night and he said, ‘Will you try?’ And I said, “I’ll give it a shot.” And I played.”

Hudson remembers that it went over well: “I played primarily country music which nobody was playing back then. Every single person I spoke with said, ‘You’re destined for failure. You don’t have the right song list. You are gonna have to go more traditional with Jimmy Buffet, James Taylor and folk music.”

But a year later, he was the hottest act in downtown Greenville, according to a poll in the Greenville Times magazine.

“It wasn’t because I was that great,” Hudson says. “It wasn’t because I could sing all that well. But I knew having been a musician in a classroom how to draw a box around what my vocal range was and what my guitar abilities were. And I packaged it well within my abilities and it became entertaining and that’s why it took off. Were it not for that night and Mickey Muns happening to be there, this would not have happened.”

Hudson’s musical life story is full of chance meetings that were pivotal in his life. Like meeting Michael Kinzie. 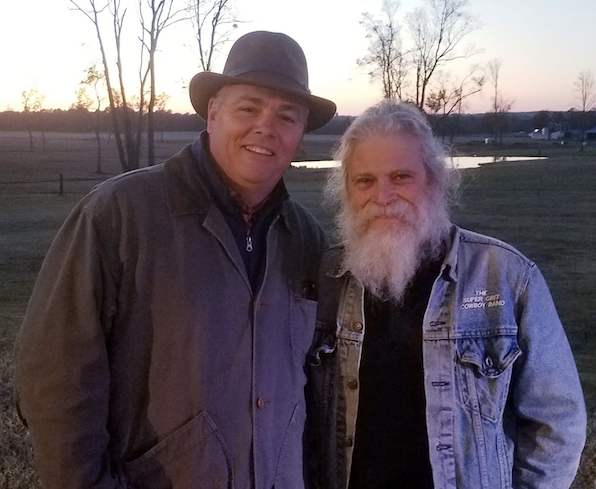 “Mike Kinzie’s the reason I had a fake ID,” Hudson says. “’Cause he was such an incredible performer, I would go wherever I could to see him play. He had a stage presence. He had that big cape he used to put on. He would pontificate at the microphone.”

Hudson played the cello in high school and was aware of an event that Kinzie was responsible for, called the Hood Swamp Symphony Ball: “He would write a score for high school students to play with the Supergrit Cowboy Band. Of course that was intimidating.”

Then one night, several years into Hudson’s playing in downtown Greenville, Kinzie walked into the bar. “My knees started knocking, because I knew there was the guy who had been such an inspiration to me, listening to me play. And I was frightened by it,” Hudson remembers. “I saw him and I went straight to the bathroom and I hid from him. And when I came back out, he was standing there. And he said to me, ‘I don’t know if we ever met or not, but I would love to play with you if you would have me.’ I said, “You’re so talented. Why would you play with somebody like me? I’m just a guy with a guitar.’ He said, ‘Because I’m a supporting musician and I have to play for somebody. And I love the way you entertain and the way you play and the control you have over your voice. And it would be an honor to play with you.’ And we’ve been playing together for the better part of 25 years now.”

Hudson explained that performing for audiences in public with competing distractions can be challenging.

“There used to be this lady that played out, named Kitty West,” Hudson remembers. “She was this blonde-haired freckled hippy girl, kind of Joni Mitchellesque, but boy she could wail like Janis Joplin. One night she came to hear me play and she asked how it was going. I said, ‘It’s not going well at all. These people are not engaged with me.’ She said, ‘You’re not looking hard enough. Look under the table. Watch their feet. Watch them tap their hand on the table. Look at their lips and see them mouth the words with you. Sometimes you have to do this. But let me give you a point you need to understand clearly. You didn’t pay these people to come in here and glorify you. These people paid you to entertain them. And when they feel like singing, they’ll sing. And if they don’t ever feel like singing, that’s okay too. Because you know what, Victor? The difference between a good gig and a bad gig all boils down to one thing. And that’s whether or not you get paid. You’re here to practice your craft. You’re here to entertain when they feel like being entertained. And you’re here to make a little money at it.”

Ultimately, though, Hudson realized music couldn’t be his top priority. “It’s important to me to be a father first and everything else has to come second,” he said. “I did audition for America’s Got Talent once, and I auditioned for The Voice. Somebody with The Voice came and sat down with me and said, ‘Mr. Hudson, you talk in your bio about being a family guy. You need to understand, if we choose you to be a part of this, we’re gonna pay you to stay with us, we’re gonna buy you some clothes, we’re gonna feed you. But we’re not gonna be able to help you make your house payment.’”

Hudson concludes, “At that point my kids were 5, 6, or 7 years old. I realized the cost of chasing that rainbow was a little bit higher than I was willing to pay.”

He still plays in public, balanced with the demands of his managerial job, and still with Michael Kinzie, but just not as frequently: “The beauty to me is the simplicity of it all. It’s a wooden instrument with strings on it. Who doesn’t want to go have a few cocktails and sing, ‘I’ve got friends in low places’? People love to do that. You can lure them away from the television and the cell phone when you play that magical song. Or ‘Brown Eyed Girl.’”

Hudson said that he loves that he can get paid to play music but adds, “I would still do it if I didn’t get paid, because it’s a part of me. I can have the worst week or the worst month and get so far off-kilter and I’ll pick up that guitar and sing to somebody who sings along with me–and it’s better than anything I could possibly do. It’s been a wonderful part of my life and I’m so thankful for having had the opportunity to do it.”

Originally published in the Daily Reflector June 25, 2022 as “Victor Hudson: From Being Done to #1.” 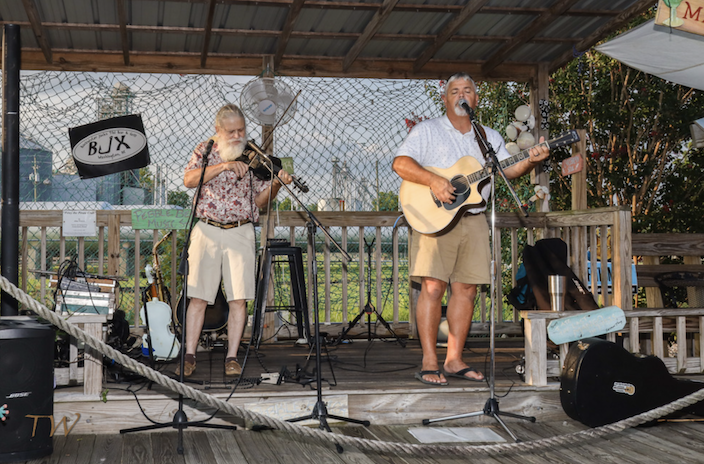