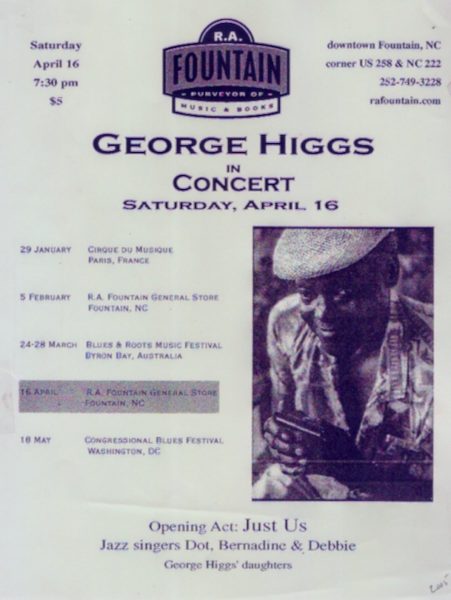 from our August 2006 Fountain AfterDark:

Like Tarboro Blues, his first CD, the new record is produced by Tim Duffy and released on his MusicMaker Relief Foundation label.

Bettye Higgs reports that her husband is doing much better since suffering renal failure and several resultant small strokes this past spring. He was not in good shape for a long time, she says. He is on dialysis three times a week, but he is in good spirits and has started playing guitar and harmonica again.

“The doctor prescribed it,” Mrs. Higgs says. “He said it was good for his hands and for his wind.” She adds that George suffers no speech impediments or problems with his hands, and that he’s anxious to get out again. “To hear him talk, you wouldn’t know anything had happened.”

Higgs has had to cancel several gigs, and Mrs. Higgs’ surgery two weeks ago has also slowed the family somewhat. She is now back at home and is able to get around the house.

“We hope to get over to Fountain for Lightnin’s show,” Mrs. Higgs says. [Higgs’ longtime playing partner Lightnin’ Wells returns to Fountain General Store for a concert on September 23.] “We miss seeing the folks over there, but Myrtle [Wooten] calls and lets us know how everybody’s doing.”