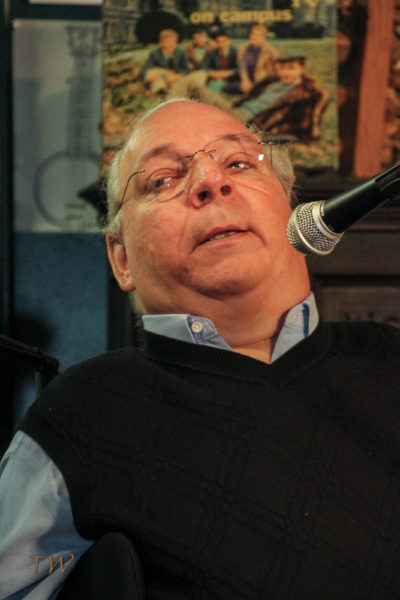 We’re celebrating the recent publication of Marty Silverthorne’s collected poems, by St. Andrews Press on May 21, 2022.

Marty L. Silverthorne died on Thursday, November 7, 2019. He was a good friend and outstanding poet, and he loved visiting R.A. Fountain for music and our occasional literary events, including several at which he was featured.

Here’s one of our favorites of his many poems, his response to witnessing a Malpass Brothers concert here.

We celebrated Marty Silverthorne day here on December 15, 2018, and publication of his collection No Welfare, No Pension Plan in 2006.

He was a featured poet here (often with his fellow poet and friend Shelby Stephenson) when we hosted Walter Skold on his Dead Poets tour in 2014; when we celebrated publication of Georgann Eubanks’ Literary Trails of Eastern North Carolina, in 2013; when we hosted the North Carolina Poetry Society in 2012; and when we gathered to remember Linda Flowers, in 2005. 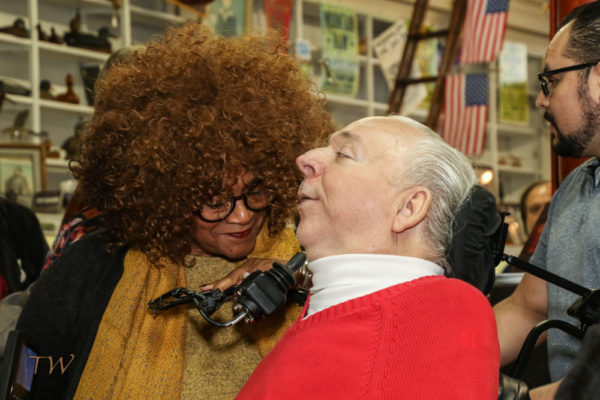 I met Marty through another good friend, Mike Hamer, the legendary singer-songwriter who died in 2017. They were often together, two of East Carolina’s tightest compatriots, sharing their love of this region and its culture and original music, and Marty hardly missed a Hamer show out here until he wasn’t able to travel so much. They also co-wrote a few songs, and they seemed always to have smiles enough to fill the world.

I think of Marty–along with Shelby Stephenson, A.R. Ammons, Jim Applewhite, and Joan Cockrell New–as the best farm poets East Carolina has produced, Marty perhaps more for the resonance in his poems of the people and places around our rural places than for what they grow.

Order Holy Ghosts of Whiskey, published by Sable Books of Greensboro in 2015. 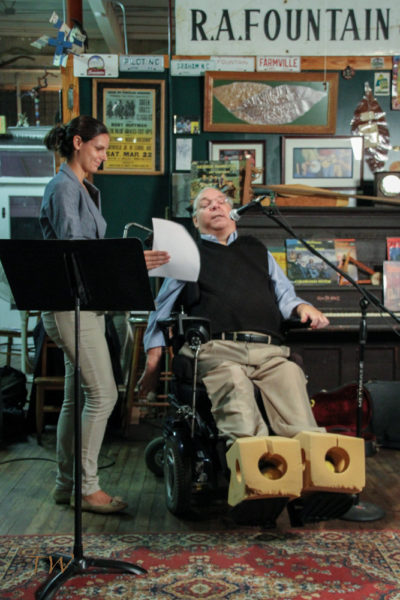 Here are three questions asked of Marty, when he was a candidate for the Poet Laureate of the Pamlico, which is presented by the Pamlico Writers Group.

1. When did you start writing?

In 1980 I attended St Andrews Presbyterian College and studied with Ron Bayes, a prolific writer and brilliant scholar. I was taking a class on W. B. Yeats, T. S. Eliot, and Ezra Pound. I was in way over my head. I wanted to write and pass the course because I needed to, but I didn’t get it. Ron said, “listen to the music,” when we were discussing “The Waste Land”. I didn’t get the message, but I got the music and I started reading for the music and waited for the message later. One Monday night Ron invited Shelby Stephenson to our creative writing class. Shelby read from his collections about hog killings and the rural south, a place I knew. He sang “Uncle Pen” by Bill Monroe and a Hank Williams song or two. I got it. If poetry was music and Bill Monroe and Hank Williams wrote poetry, I was in. It would be a long time before I would start penning the down east poems, and I have always been inspired by Shelby and those country songs and the threads that stitch us together. We are closer than we are apart, and I owe that to Ron Bayes. Since then I have been writing continuously.

2. Who are your favorite poets?

This is a hard question I am not schooled in the classics like wish I were. My largest influences have been Southern writers, Black writers, Native American writers and people of color. I tend to be moved by people with hardships. I am not a writer of roses and butterflies. I am more blood and puss. I have to say it goes back to Shelby for me. I’m reading his newest collection, but I am also reading Nikki Giovanni, and I just finished Jaki Shelton Green. Michael Chitwood is next in queue. I’m very fond of Walt Whitman, and I like to return to Eliot and then I bounce back to the contemporaries. I admire the poetry of James Applewhite and Fred Chappell. So the short answer, I love poetry. I have left out so many. Oh, I can’t forget A.R. Ammons.

It’s crazy. I dictate all my work to a scribe and they jot the notes in journals, notebooks, calendars or type them. After they have been handwritten, they are transcribed onto a computer and punctuation and tenses are cleaned up. I then have scribes read them to me, and I make any changes that I can hear are out of sorts. Next I print them out and take them to my reading desk where I pour over them looking for better words, line breaks, punctuation and spelling. After I have reviewed them thoroughly, I share them with my wife who attacks them with the passion of a butcher. Then we get down to the real meat on the bone. When we are through truing it up, I then have a couple of dear friends who offer feedback on imagery, punctuation, and line break. It’s a long process but the rewards are great.

These details are from Marty’s obituary

A memorial service was conducted Saturday, November 16,  in the Wilkerson Funeral Chapel, Greenville.

Marty, a graduate of Williamson High School, was left paralyzed after a motorcycle accident in 1976. He attended St. Andrews Presbyterian College, where he studied with Ron Bayes, and East Carolina University. At St. Andrews he began writing poetry, which he continued throughout his life, publishing several books of his work for which he received numerous awards and recognition.

In 1987 Marty met Sylvia L. Bullock, the love of his life, who became his wife and guide to spiritual and intellectual creativity. Sylvia had three sons, David, Chris, and Michael, who embraced Marty like a father. They contributed to his happiness by sharing their family with him. Affectionately known as “The boys,” Sylvia’s children had six grandkids between them which were a prize of Marty’s life.

Marty worked 30 years after the accident as a counselor for persons suffering with addiction and had successfully stopped his own alcohol and drug use with the help of spiritual fellowship.

Marty touched many lives; we are all grateful for him and will miss him. 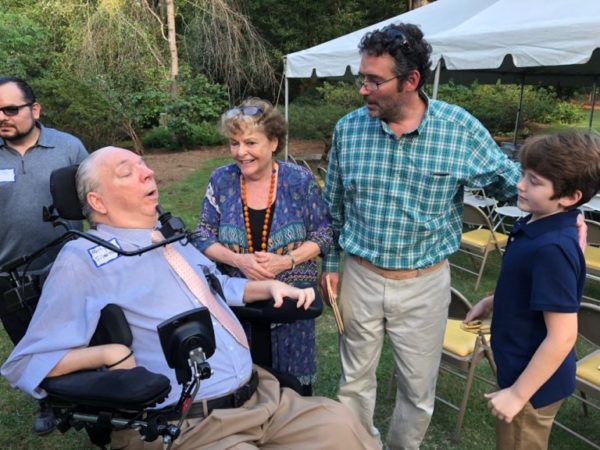 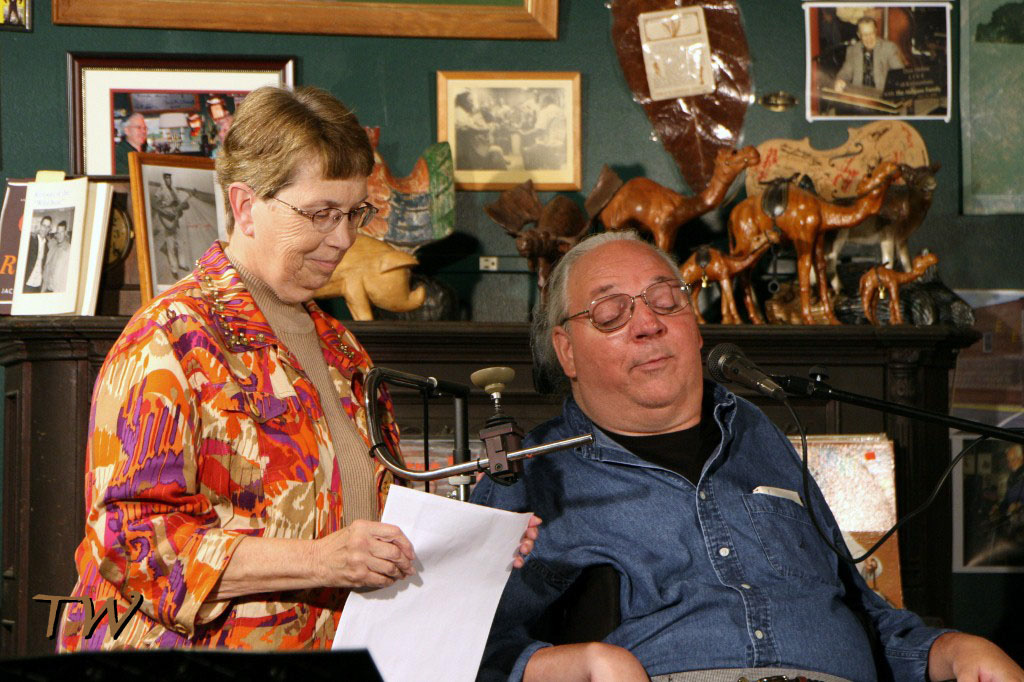