When in a Jam, Play On

St. James Jammers:When You’re In a Jam, Play On

“We need you to help with the chorus, and it’s easy enough…you only have to remember 14 words. But I’ll help you.  The first word is Alright. Okay, the second word sounds a lot like the first one. It’s Alright. And the third’s….Alright….”

The fellow strumming the Redneck guitar and talking into the microphone smiles mischievously and the audience gets it. They are bonding in a conspiracy, delighted to discover they don’t have to make recycled brain cells remember 14 words, but instead, one word 14 times. Mike Kraczon is sharing one of his many original songs with an appreciative audience, assisted by friends with string benefits…guitars, mandolins, banjo, fiddle . On this particular night they’re playing to Cypress Glen residents, but on another Monday it could be Spring Arbor, Community Crossroads shelter, or on a Thursday afternoon, Red Oak Assisted Living. Saturday mornings find them at the Leroy James Farmers Market at 10:00 am.

If the audience enjoys the music half as much as the hodgepodge group takes pleasure in playing it, then all is right with the world. For an hour no one is thinking about the pains in their parts….they’re singing “Will the Circle Be Unbroken?” or twisting again like they did last summer.

The fact that Mike’s playing a “Redneck Guitar” is no commentary on his social class or upbringing. It’s a brand of custom guitars built by a fellow jammer, John Bradley, whose picking skills mean he’s hand-picked to play the guitar breaks. He’s easy to spot with his trademark red tennis shoes and his incredible ability to get dumped on a weekly basis  (when he sings a sad love song like “Something Coming to Me”) and gets his vocally violent revenge in “Banks of the Ohio” (when he throws his love interest into the river for rejecting him).

The group hails from St James United Methodist Church, thus branded “The St James Jammers,” but their motley musical crew contains more than Methodists, including Catholics, Episcopal and the stray Pentecostal. They recently played at a church building fund worship service for a charismatic denomination and found kindred spirits there through both the music and the sentiment behind it.

Fiddle player Anne Heritage started the group 10 years ago, and many have been instrumental in keeping it going. One among those is the man playing the funky little bass guitar, Harvey Estes. He might be heard singing songs of his own fanciful imagination, such as “Like a Fridge Over Troubled Waters” or rallying the 1814 troops through the briars and the bushes in a rousing “Battle of New Orleans.”

Alise Rowan, who named her mandolin “Caroline,” gets a little emotional sometimes when singing “Take My Hand, Precious Lord.”  “It was a favorite of my father’s,” she shares. “I have a recording of him singing it in the late 1960s.” 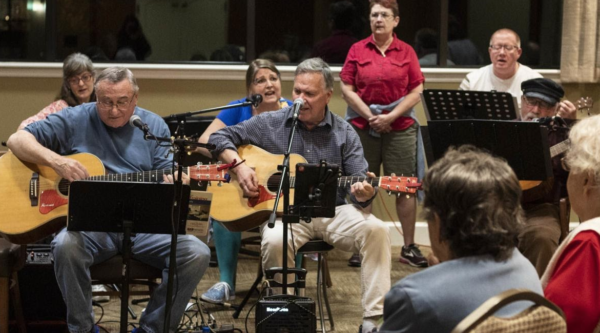 It’s apparent that music is a unifying force that transcends religion,  politics, gender…and even generation. One of the jammers jokes that the nursing home staff might try to prevent him from leaving, as he looks like he belongs there. But the recent addition of a twelve year old guitar player, who’s happy to sing songs  that were hits before he was born, like “Sloop John B,” brings the average age down dramatically.

While they admit to enjoying the music and each other’s company, the biggest reason they play together is the reflection seen in the eyes of their audience. “I feel like you took us to church!” one of their most faithful fans at the Farmer’s Market proclaims, as her wheelchair bound mother beams. They come at the appointed time, week after week.

A retired ECU computer science professor faithfully drops money in their guitar case for the Community Crossroads shelter, without fail, sometimes twice. Some of the jammers knew him during his teaching tenure when his class was avoided at all costs due to its difficulty, and they’re warmed to see his softer side.

When they spot a child at the farmer’s market or the shelter, they’re quick to break out in “Jesus Loves Me” or “Do Lord,” adding the ad libbed verse that makes one or two of them cringe, “I take grape juice for communion, you take it too….like the Methodists do….”

When Jim Joseph croons “Mr. Bojangles” or “O Susannah” at the nursing homes, the ladies swoon. “Oh they don’t care anything about me!” Alise laughs,”it’s all about the men.”

But during a Christmas performance at Brookdale Dickinson, one resident wheels up close to the jammers, asks if they have a spare instrument for her to play, and sings right along with every word to the familiar Christmas carols.

Playing at Community Crossroads, the shelter they raise money for week after week, is particularly special to many of the jammers, despite acoustics that make it difficult to hear each other. “I’m sure we had a couple of rhythms going on there,” Alise jokes, “because I couldn’t hear a thing.” But when a woman comes up to them after they play, thanking them for singing “Rocky Top” because she was raised in Tennessee and it made her think of home…they know it’s worth some inconvenience. “Playing at Community Crossroads is my passion,” shares Anne Heritage.

Mike’s original songs cover the gamut from the relatively raucous “Down on Bourbon Street” and “Gotta Get Her Out of Me Blues,” to a sweet love ballad about his wife, “Ree.” But the story behind a couple of his gospel songs is just as touching as the lyrics themselves.

He and a few other jammers were playing at Red Oak on a Thursday afternoon when one of the longtime residents, Butch, scooted his chair up close as they were packing up their instruments. “Here….” he said a little gruffly, shoving a stack of papers toward them. “See if you can put this to music.”

Mike indulgently agreed to give it a try. When he got home he realized the word “Hallelujah” and just a few other words were on a piece of paper several times. And then there were some 20 odd pages with about six usable words written on them. Yet he took what was there, accepting the challenge to channel what Butch envisioned, and building upon it, came up with “He is Here” and “Console Me, Lord.”

The jammers played the songs for Butch the next month they were there, and the next. And then…..the crusty personality they had gotten to know and appreciate… was no longer there. But each had given the other something pretty consoling in the lyrics of their unconventional collaboration:

Help me find out today
I can live your loving way.
Lead me home, dear Lord, lead me home.