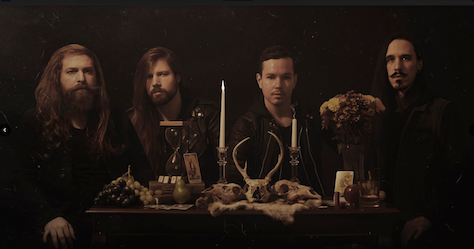 Charlie Daniels went down to Georgia by way of Scandinavia and lingered in the devil’s playground. That was my first impression when I listened to the title track from Æther Realm’s album, Redneck Vikings from Hell, released in the midst of a pandemic. Admittedly, I was wayfaring in a strange land of Scandinavian metal. But even I could recognize the musicianship and was charmed by the distinctive twang of a banjo swimming in a turbulent sea of sound amongst its fiercer brethren, the electric guitars, drums, et al. Still, if I had stopped with that initial assessment of the Greenville natives’ music, I would have done an injustice to a band that has been refining its metal in the furnace of life experience for a decade. 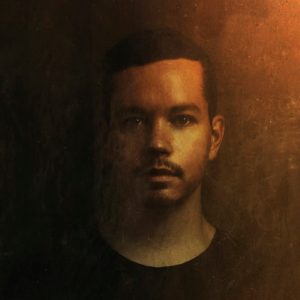 Their appearance and sound intimidate…until I learn that one of them graduated from D. H. Conley High School, another from Oakwood, and one studied classical guitar at ECU. Suddenly these solemn, black leathered, European-looking musicians are long-haired country boys from Pitt County. But even if they began like the splash of a pebble in the Tar River, their reputation has created a ripple effect expanding their following to oceans of fans, even across the pond. One of their songs, The Sun, the Moon, the Star…all 19 minutes of it… garnered over a million views on Youtube. 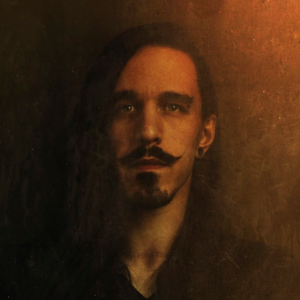 Living in Asheville now, they don’t mind if their Greenville roots start showing. “I was born and raised in Greenville,” Heinrich Arnold, who plays guitar and provides backing vocals explains. “I went to Greenville Montessori and then was part of the first graduating class at the Oakwood School.”

Heinrich started his college education at ECU, eventually deciding to put his computer science degree on hold to pursue his music. He worked at Starbucks on Greenville Boulevard and attended youth group at Covenant “with my best friend for a few of my high school years. My folks are still over there, so I make trips there every so often.”

Bass player and lead vocalist Vincent “Jake” Jones moved to Greenville when he was 6. He attended Wintergreen, A.G. Cox, and D.H. Conley, and Pitt Community College. Jake also talks about his time playing with the St. James UMC contemporary worship band. “I credit Alan Gill, the old band leader, with whipping me into shape. My playing style today still pulls from knowledge I gained there.”

Donny Burbage, who plays guitar and provides backing vocals, moved to Greenville in 2010 when he was 23. “I transferred into ECU for music theory/composition and studied jazz and classical guitar with Scott Sawyer and Dr. Elliott Frank, respectively.” He has family that lives in Bath and Little Washington, he explains, but since his father was in the Navy, they moved around a lot. “I worked at Buffalo Wild Wings for a bit, but mostly I ran sound at the Turnage Theater and Crossbones Bar and Grill, and I was the guitar repair technician at P.C. Sound in the Greenville location.” 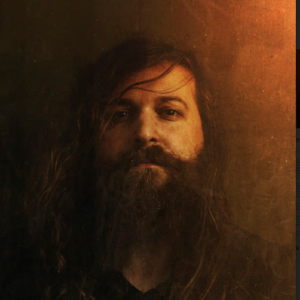 Drummer Tyler Gresham lived in and around Greenville from the time he was about 6 years old: “In 2010 I went to undergrad at ECU for Graphic Design,” he said. “After I graduated in 2014, I took a design job in Raleigh, and have been there ever since.”

A fellow musician in the church band during the time Jake was there jokes that he’s now tempted to spell his name “Harvey Æstes.” “When Jake started playing for the praise team, he was always easy going, a nice guy, easy to work with,” Harvey remembers. “But he played continuously. One time after the service was over, everyone else was packing up their gear, but Jake kept going. A five-year-old kid had been watching him and came up to the stage after the service, so Jake just kept right on playing. As long as there was an audience, he would keep going, oblivious to unimportant things, like the realization that it’s time to go home.”

While most of their fans seem to get the “We are not from Finland” bit as a silly self reference, they still get others every day that are genuinely surprised.

When asked how they describe their genre of music, Jake explains that it depends on who he’s talking to. If someone already listens to metal, he might say, “Well imagine pedal guitar riffs like At The Gates, but we try to have the orchestration of Turisas and Wintersun and there’s bit of Opeth in there and on the latest album we tried some more concise song structures like Alestorm or Powerwolf.” If they don’t know much about heavy metal, he’ll usually say, “It sounds like Metallica playing the Pirates of the Caribbean soundtrack.”

The band has released 3 LPs but made their Napalm Records debut in May 2020 with Redneck Vikings from Hell, a title that highlights their unique mashup of Southern heritage and European metal style of music.

“I think it’s a funny way to juxtapose two genres that may not necessarily seem like they meld together, but they’re both steeped in folk music,” Donny explains. “To me, all music is Folk music; I ain’t ever heard a horse make a song.”

Jake says about the album, “I was really excited to present an idea that seemed very uniquely ‘Us’ – trying to close the gap between the way we’ve presented ourselves artistically and aesthetically in the past and a completely honest portrait. The end result is odd, but I feel like the music has wound up filled with all of the elements that I love. Moments of elegance and beauty, moments that make you want to get up out of your chair and start a one person mosh pit in your bedroom, moments that make you wanna party with your buds, and hopefully some moments that can reach and heal a hurting heart.”

“It also puts the vibe out there that we don’t take ourselves too seriously,” Heinrich explains, “which I imagine outsiders to the genre usually assume of most metal bands.”  Their fans seem to appreciate that kind of lighthearted energy. “At the end of the day, though, metal heads tend to be very passionate about their music–its a very visceral variety of art with its roots dug pretty deeply into styles that were considered countercultures of their time, so in most cases people will really love it or not really understand it.” 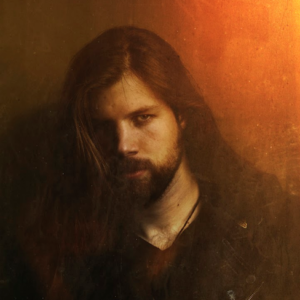 The band started ten years ago, playing their first shows at Backdoor Skatepark and the Tipsy Teapot, venues locals will surely recognize.

The original lineup included Heinrich, Tyler, Jake, George Yiznitsky (guitar), and Robbie March (keyboards and live guitar when needed). “Heinrich and I had been playing shows with George before that under the name Sakrament,” Jake explains. “We kept that lineup until 2012, when George and Robbie left to pursue college. George was replaced by Jack Rodriguez-Dougherty of the band Blue Destroy (another group of local legends). Jack was with us for our first album, and for our first several tours.”

“I’d say that those twelve or so years of collaborating have played a big part in how we approach songwriting,” Heinrich says. “We’re all good friends and very comfortable working both independently and as a team, so we’ve got our workflow streamlined to a point where it’s pretty easy for us to all sprinkle in our own musical flavors to the songs.”

Donny associates his first interest in music with video games. “I used to write lyrics to the music in video games when I was in 3rd grade, and I’d try to figure out how to play them on this Casio keyboard I had.”

Jake remembers taking piano lessons when he was younger from a woman named “Miss Lee.” “She was very patient with me, which was great because I didn’t practice at all. The most difficult song I learned from her was ‘When The Saints Go Marching In.’” He got his first bass guitar at 12 (differentiating from his sister, Elly, who got a guitar), and started practicing and writing on his own when he was about 15. “I had the most success writing when I started using a program called ‘Guitar Pro’ around 16 years old, which went a long way towards helping me organize my ideas.”

“When I was eight, I was OBSESSED with that “Blue (Da Ba Dee)” song by Eiffel 65 when the music video dropped in 1999,” Heinrich recalls. “Shout out to the parents for keeping MTV on when it was truly ‘Music Television’. It’s my earliest recollection of an ear worm or otherwise having a conscious desire to listen to a piece of music.”

Like Donny, Heinrich also realizes, retrospectively, that hearing the music and sound effects in some of his favorite video games growing up “sparked joy.”

His father wanted him to have the experience of playing an instrument so he let him pick one when he was 9 or so. He chose the drums as he thought they were the “coolest and least intimidating” but abandoned drums in favor of the guitar. “I picked up guitar in eighth grade because this one kid would bring his to school to play some Green Day songs and that one riff from Ozzy’s “Crazy Train.” I thought it was the coolest thing. I would tinker here and there with my dad’s synths and hack together some shoddy arrangements of my favorite video game music on software like Fruity Loops—I suppose this was a precursor of sorts to my interest in sound design and getting into the production side of things, later on.”

Are international audiences surprised to discover Æther Realm is from North Carolina, known for barbecue, grits, and the Andy Griffith Show?

“I think once they hear us talk, they seem a bit surprised that we aren’t a European band,” Donny said.

Jake’s clearest memory of international performance is from Rouen, France. After the show they went out to a bar nestled off of a  cobblestone street: “It reminded me of Christy’s Europub and of home, and I took a moment in the cold night outside the bar to look out at all the ancient buildings and architecture around and just had the thought ‘Wow, we really made it out here playing music!’”

Donny remembers the show in France in front of 1800 people for everything that started going wrong during the soundcheck, before Heinrich found a last minute fix for their gear.

“I think our story has always been one of ‘just making it work,” Jake says of the band. “Whether it’s been a faulty PA system in a tiny bar in Philly, or our wireless system cutting in and out at the House of Blues, or setting off the fire alarm at the Tipsy Teapot – we’ve always just done our shows as well as we can, in all kinds of conditions. I think 10 years of not giving up is as bright a band experience as I can think of.”

In 2020, Æther Realm has faced the challenge of waiting out a pandemic while all their shows were cancelled. They’ve kept their day jobs and strive to keep fans engaged with giveaways and videos, and working on putting on a living room live show.

But Æther Realm learned while still in Greenville that the music business wasn’t for the faint hearted. Jake said he worked on his folk metal epic…while washing dishes at Cypress Glen.

To hear a surprisingly tender side of Æther Realm, where their worship music influence is in evidence, check out their song, “Guardian.” The band is also on Facebook and YouTube.