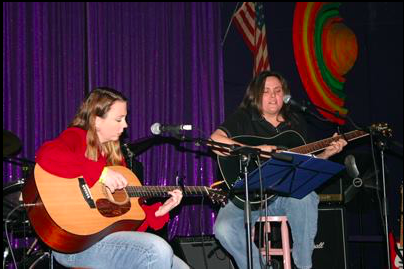 Someone’s Sister, the dynamic Greenville-based duo, played RAF a couple of times in our early years.
Folk rock band Someone’s Sister was founded by Georgia Winfree and Katherine Jones. They often perform with Laura McLean (guitar) and Tammy Somersett (drums).
The band’s name came from the founding members’ belief that everyone is different, but at the same time everyone is someone’s sister or friend. As such, Winfree and Jones’ understanding is that all people are connected and everyone can and should be someone for a person or group of people in need. NPR described the band as “a cold glass of sweet tea after a hard day”.
What is unique about Someone’s Sister is their work to raise awareness about the need for child abuse prevention.  According to an appearance Winfree and Jones made on Public Radio East with George Olsen, the band uses the money from their gigs to pay the premium on a life insurance policy taken out by Georgia Winfree.  When Winfree passes away, the interest on the principle will be used to write grants to assist organizations involved in preventing child abuse and domestic violence.
Someone’s Sister has performed across North Carolina, on college campuses, at music festivals, at Eddie’s Attic in Atlanta, and at New York City’s the Bitter End.
Winfree and Jones write the band’s songs. As a result, the tracks can be incredibly personal, often relating directly to one of the pair’s own life experiences.
The band has released two CDs: Hand Me Downs (2004) and Calm in the Chaos (2008).