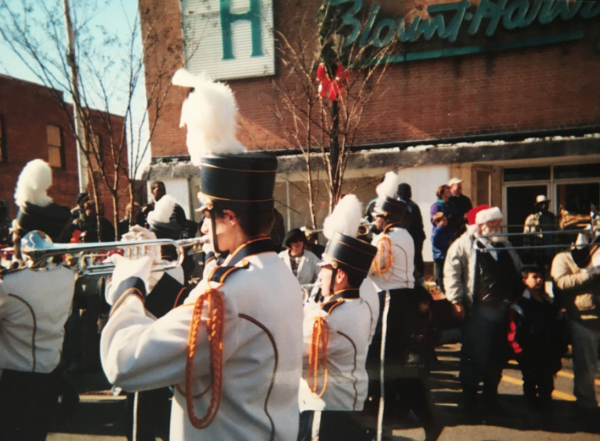 When Christmas Came Marching In

With the first distant thump thump thump of the bass drum, hearts beat faster. Necks crane to see beyond passing fire trucks, swerving tiny cars driven by grown men, and ambling child brigades for the first sighting of a school banner. Main Street, or in Greenville’s case, Evans Street, for a glorious hour is transformed into Christmastown. Winterville suddenly sounds like the most appropriate town name ever. And finally, among the throngs of spirited humanity someone confirms it with a shout of unabashed glee, “They’re coming! I see them!”

Soon a distinctive rat-a-tat-tat of snares and percussive cadence pierces the background din of chattering children. And when the first plume comes into sight, looking like the-nutcracker-suite-meets-the-royal-army, crowds respond with slack-jawed awe.

Maybe no one feels the rush of excitement rivaling Christmas morning more than a former marching band member. We’re simple to spot among the spectators, with a special sort of wild look in our eyes. It’s easy to see we’re torn between social propriety and the desire to shove people who are obscuring our view out of the way. Will anyone notice if we walk briskly on the sidelines so we can hear the band a little longer? Band parents are very often former marching band members who are more than happy to sell fundraiser oranges in order to have an excuse to march alongside. Ostensibly to retrieve the errant drum stick and serve as crowd control.

Although everyone understands our current limitations, in 2020 the absence of parades as we knew them leaves a gaping hole in our hearts. Especially for those of us who live for that rush marching bands bring to the Christmas parade. Even more so for the students who would have been participating. And few have been a part of that experience more often than James Fleming, who served as band director at D. H. Conley High School from 1977 to 2008. 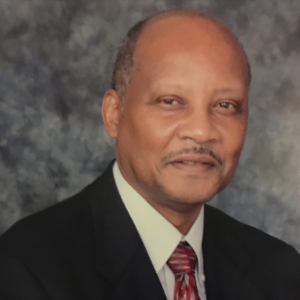 Originally from Winterville, Fleming attended D. H. Conley school as a student, the first year the school opened in January of 1971. He was a junior then and became a part of the first graduating class that attended a full year. But there was no band at Conley at that time…it would be three years before one would be established.

“That put me behind,” he said, because he already knew what he wanted to do: pursue a career in music. He’d known it from the time he was a small child and had a babysitter with a piano. “She let me bang on it all day…sometimes I’d make up little songs.”

He would major in music education at St Augustine’s University in Raleigh, with clarinet as his primary instrument, returning home in 1976. After starting his career at G. R. Whitfield and Chicod, in 1977 he went to work at Conley. For the first few years he was at Chicod in the mornings and went to Conley in the afternoon.

He credits school administration for recognizing the importance of growing the band program in middle school. “If you aren’t replacing your high school seniors with ninth graders, your band is going to die.” When he worked with middle schoolers, a lot of them already knew him and continued on in high school. At one point during his career at Conley, Fleming had as many as 130 to 140 students in band.

Fleming remembers the excitement associated with the band marching in Christmas parades. “The students were very highly motivated when they’d come up the street and see the crowd waiting for them,” he said. “Especially when you’d turn the corner of Evans Street. The kids got really excited there, people were cheering, and at one time they even had an announcer there, introducing the band.”

He explained that the motivation actually starts before the parade. “We have the opportunity to see what the other bands will be playing and doing. It’s sort of like a competitive atmosphere.”

People from all walks of life are on the route and there’s no telling who you will meet. 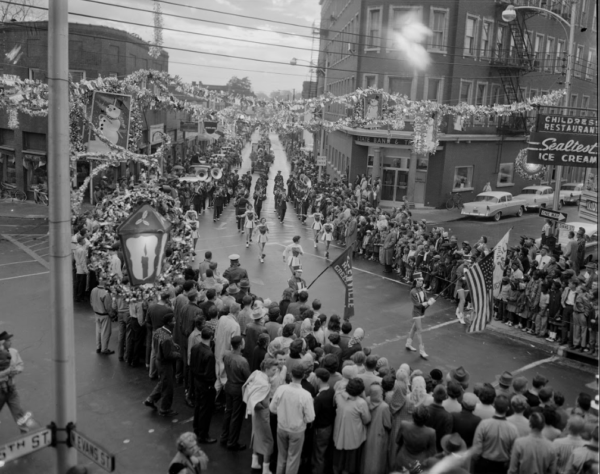 “I remember the marching band participating in the Greenville Christmas parade on a very cold and snow flurry day,” Fleming said. “As I was walking, I got ahead of the band, maybe a half a block and I happened to run into Terry Holland, who was the athletic director of East Carolina University at the time.”

But nothing compares to that moment when the drum major blows two long whistles followed by three short bursts in succession, signaling the band is to begin playing.

With any luck, the band is positioned right before Santa Claus, a placement of honor reserved for the strongest band. And at Christmas, the song choice for Conley was often a medley of “Sleigh Ride” and “Jingle Bell Rock.” The percussion section makes the clip clop sounds of the horse’s hooves and a brave trumpeter will ring out with cascading notes, in a convincing neigh.

Sometimes, to really get the crowd going, they’d do some fancy maneuvering. Conley would do one with 6 people in a line, left to right, and they’d cross. Three people would go to the right, and three to the left, and then the line would come back together. “It looks like chaos,” Fleming said, “and then all of the sudden, the band is…boom…back together. The magic is when you see it come back to a straight line…you’re like, ‘How did that happen?’”

Last week we were visited by the ghost of Christmas past, nostalgically remembering musician Mike Hamer. This week the stark reality of Christmas present is sinking in: it’s the year marching bands are conspicuously absent and silenced. I think we’re all quite ready for a glimpse of the ghost of Christmas future. And I’ll give a wild-eyed, hearty welcome from the corner of Evans Street in December 2021, when Christmas comes marching in again.