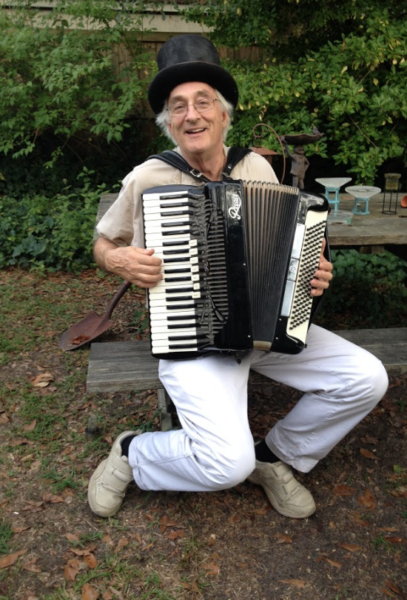 The Gospel Accordion to Jim

The Gospel Accordion to Jim Watson

Tom Waits, with characteristic dry wit once said, “A gentleman is someone who can play the accordion, but doesn’t.”

Jim Watson is no gentleman.

The long term East Carolina University geology department staff member is, however, a fine person and accordion player, by all accounts. And playing an accordion is no joke, requiring tactile left-handed deciphering of as many as 120 bass buttons, while independently playing a piano keyboard with the right. All while handling the heft and physicality of the squeezebox. Watson manages it with the rhapsodic facial expression of a Parisian musician on the banks of the Seine.

Fellow musician Bill Redding describes him as “a superb musician on keyboards and accordion.” After comparing his voice to Elvis’, Redding said “his accompaniment adds something positive to a song.”

Sue Luddeke performed with Watson in several bands, including the Zen Revelators and August Beauty and that Fool Moon.

“I even composed songs of a gypsy vibe so that I could incorporate his accordion in that band,” Luddeke says.

Watson’s path to the accordion was a circuitous and storied one. Taking piano lessons through eighth grade provided him a good foundation, he explains, with scales and technique. But he found it somewhat confining. “You know classical piano: play the notes, “ he remembers.“I kept wanting to improvise.”

That desire to improvise would serve him well later, with the accordion keyboard.

Watson’s foray into music evolved through high school musicals and singing Gregorian in the college chapel choir at Wesleyan University in Connecticut.

In the 1970s he lived in the Chapel Hill-Pittsboro area and got to the point where he could flat pick blues and bluegrass on guitar. It was around that time that he got an old piano and took a few months of private jazz lessons.

As he puts it, “Things started looking up after I came to Greenville in 1980.”

He picked up a Fender Rhodes piano and got involved playing music with some medical resident musicians and Bill Redding. But he got frustrated with not having a portable, acoustic instrument for jams out in the woods.

All that changed when as walking down Dickinson Avenue, he noticed an accordion in the window of a pawnshop and found they would sell it to him for $35.  He took it home, figured out the button system, and started learning tunes, like Lara’s Theme and Fiddler on the Roof. “I’ve been through quite a few accordions since then,” he says. “The one I am playing now was laid on me, and turns out to have a story.”

“Once I started playing accordion, people seemed to want to feature it in the sets we were working up,” Watson remembers. “At one point, I was invited to join a contra-dance band. I finally figured out that accordion worked a lot better in ensemble playing if I mostly left the buttons alone and concentrated on the keyboard.”

He played with Elderberry Jam for several decades, playing the fiddle part on the keyboard as one of  two melody instruments. “I learned lots of old time and Celtic tunes pretty well, as when playing for dances, you play them over and over.  I enjoyed improvising over the melody line,” he says.

At some point Watson took the Jazz Keyboard Harmony class at ECU, followed by some private lessons. “This upped my game on piano, and finally gave me the tools to begin sounding like I wanted to on piano.”

Watson got involved playing the piano and accordion with The Zen Revelators which included Dave Turner, Mike Hamer, Bill Redding, Bob Clyde, and Sue Luddeke. Watson describes it as “kind of an eclectic blues and jazzy set.”

“Later, Sue and Karin Zipf invited me to join a group they were putting together. We played originals by Sue and by Karin, with me alternating between piano and accordion,” he says.

Other bands occasionally ask him to work on fitting into a few of their set pieces. “People seem to appreciate the accordion for the fills and solos it can provide,” he said, adding, “Maybe there is a bit of cachet involved as well.”

Watson explains that the accordion works nicely as a jam instrument. “It has a nice, expressive dynamic range, and is portable,” he said. “I have a pretty good ear. I can usually find a way to fit into a tune.”

The jams Mike Hamer set up were a highlight. “We still try to keep that going,” he said, “but of course we miss his energy and spirit.”

At home Watson gravitates to the piano. “I’ll be reminded of a jazz standard I like, then go and try to work it out on piano,” he says. “With things starting to open up, perhaps working up a set for public performance will be another  good motivator for concentrating on getting a few tunes in decent shape.”

If instruments could talk, what a story they would tell. Fortunately Watson knows a bit of the one behind his current accordion and was willing to share. It was given to him by Debbie Nordeen of Asheville, leader of a choral group called “WomanSong.” It had been given to her by spiritual author Larry Karrasch.

“On a visit to Meher Spiritual Center in Myrtle Beach, I ran into Larry and told him that I had become the new owner of the accordion,” Watson said. “He told me that it had belonged to his mother, Annarosa Karrasch. Annarosa had taken a group of nuns from New York to visit the tomb and former ashram of Meher Baba near Ahmednagar, India. The accordion had been given to her as a token of appreciation.”

And improbably, the stories intertwined right here in Greenville, of an Accordion and a Gentleman.

That is the gospel… accordion to Jim Watson. 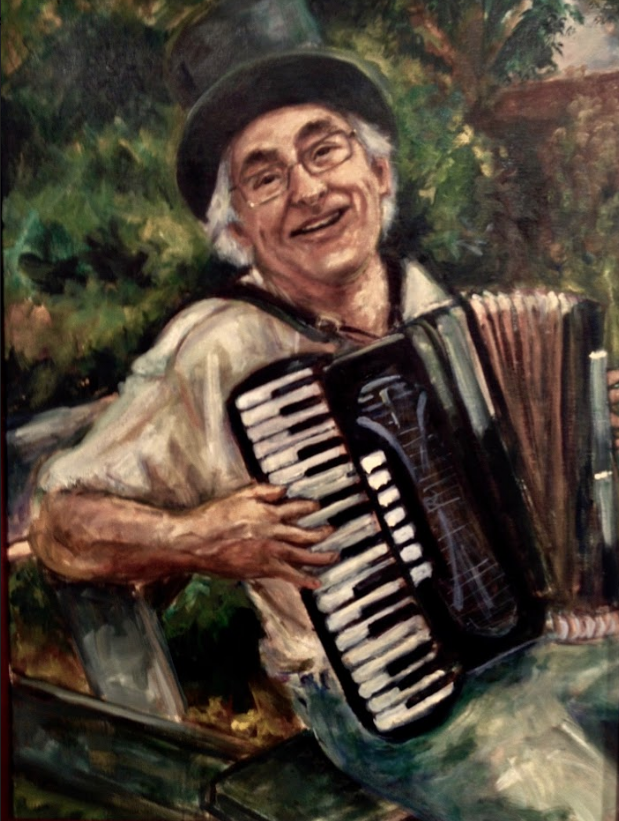