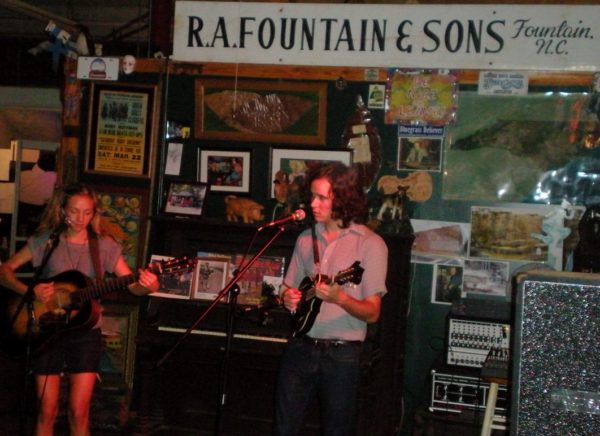 Mandolin Orange, an Americana and folk duo based in Chapel Hill,  played RAF three times in 2010-11 as they were beginning to play much larger stages. Andrew Marlin (mandolin, guitar, vocals) writes the songs that he and bandmate Emily Frantz (fiddle, guitar, vocals) have been recording and performing over the last twelve years. David Menconi of the Raleigh News and Observer describes their songs as “soothing, meditative, and disarmingly frank.” Indeed, their sound might be best summed up by the Washington Post’s Tyler Blint-Welsh, who writes that their music is “radiating a mysterious warmth, with songs that sound like ‘whispered secrets’.”

They have released six albums: Quiet Little Room (2010), Haste Make / Hard Hearted Stranger (2011), This Side of Jordan (2013), Such Jubilee (2015), Blindfaller (2016), and Tides of a Teardrop (2019). All six are still in print. Both Marlin, who wrote the album, and reviewers agree that the band’s latest, Tides of a Teardrop, is their most soulful, emotional, and personal release yet. NPR’s Stephen Thompson raves about it: “every note seems to sweep in and out on a reassuring breeze.”

Menconi, David. “Mandolin Orange Quietly Has become One of the Biggest Live Draws Around.” Raleigh News & Observer. 31 Jan. 2019. Read it.