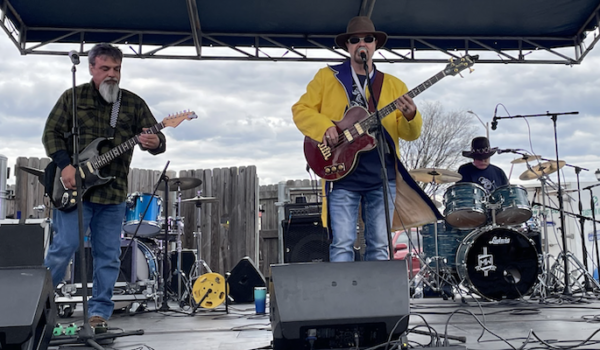 Three men walk into a bar. A locksmith, a retired prison administrator, and a city employee. It’s no joke. If Michael Wiggs, Joe Solano, and Ron Harris walk into a bar, it’s pretty certain they’ll soon be playing instruments and the punchline will be “Freebird!”

It’s a running joke that reads like a “new math” equation; how a band named “Six Pack” has just three members. Wiggs said his brother likes to call them, “a Six Pack with three empties.”

When Harris was on stage recently, introducing the band, he said people were asking “Where are the six people?” To that, he replied,  “It’s not our abs! It might be what we drink–I don’t know.” 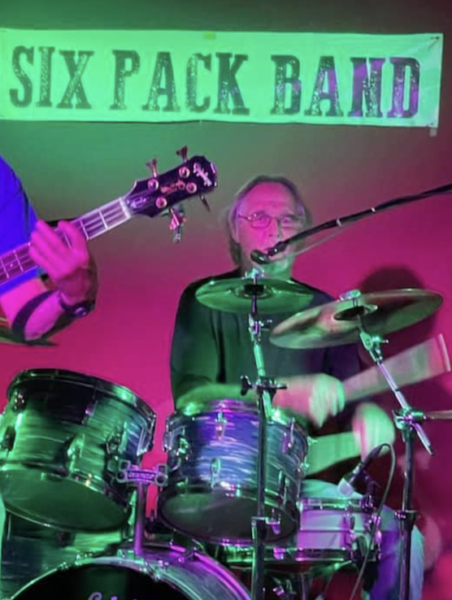 But it all started at Rock the Pamlico.

“We used to go over there every Tuesday night, me and Mike,” Harris said. “All the musicians played over there. We met Joe there.”

Then they were asked if they wanted to get together some of the people who had been playing Rock the Pamlico for a benefit at the Turnage Theater and they said, ‘Sure, we’ll do it.”

They weren’t planning on forming a band, but just playing a benefit and wanted to include everybody who had been sitting in. “We put the six people together who were already playing,” Wiggs said. “That was the first time I had to learn to play with another drummer. It was difficult.”

“We practiced 2 ½ weeks, played that show at the Turnage Theater, and just stayed together,” Harris said.

“There were several bands playing,” Solano remembered. “The headliner was Boneyard. We were right before them that night. It was for Kids for Autism. The kids came, stood down front, and had their t-shirts on.”

The original six included James Bennett, Kirk Mathews, Bruce Milligan, Ron Harris, Michael Wiggs, and Joe Solano. Over time, some of the members moved away or focused on other interests.

Since they are now down to the core three…Solano playing both lead and rhythm parts on guitar, Harris on bass, and Wiggs on drums, they’ve considered changing their name.

“We’ve been contemplating it (a name change), but the hard struggle with it is that we’ve got 900 to 1000 people following us on Facebook and do we change the name? It’s history.” Harris said. 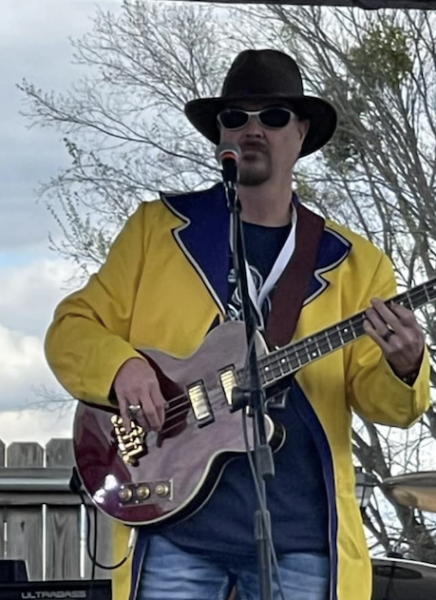 While the three started playing together around 2017, Wiggs and Harris had played off and on together for a number of years.

“The first time I ever played music with Mike was at my engagement party on Elm Street,” Harris said. “We ended up getting in a little group we used called the FOG band for Four Old Guys. We played one show on my back deck. Then Sam left us and we became the Southerners Band for about four years.”

But their individual foray into music started much sooner.

A Greenville native, Wiggs said, “I’m the drummer. That’s a ‘67 set of Ludwigs and I’ve got another set packed up. My brother was my influence. I  used to watch him play until Vietnam took him. Then he came back and gave me that set of drums when I was 15 years old.”

He actually has two brothers who play drums and all three of them are all left handed. Wiggs played in a band called Foxfire around 1978-79. “All we did was Bob Segar and Leonard Skinner.

We were a garage band,” he said, “But we’re a house band now.” He laughs because the trio practices in his house. “My idol from Greenville is a guy named Bobby Aiken. He played in Jerry Thomas’ band. When the Attic let out, there was two places to go: Stokes, or Doc Cargill’s house, for open jams. Two sets of drums and a stage. It was amazing. And Bobby kept saying, ‘You need to come on back,’ and I said, ‘I’m learning from you, Dude.’”

“As far as a band, I’m a bass man,” Harris said. “I grew up in a small town with one stoplight in Person County, Roxboro, and I chased an old girlfriend here. She left and I never did.”

Harris works for the City of Greenville and is known for scheduling the talent for the Sunday in the Park concert series, now in its 49th year. Harris plans to retire June 29 after working 30 years with the City, but he will continue scheduling bands for Sunday in the Park.

“I bought my first guitar at Rocket Music, downtown Greenville, across from Sup Dogs,” Harris said. “I practiced for six months in my dorm room, and I would just listen to tapes and practice, and the following September I got in the heavy metal band, ‘Drastic Measures.’”

Living in Bath now, Solano was originally from California. “I was stationed at Fort Bragg for a lot of years and then I met my wife here in NC,” he said.

“He was in Special Forces, Airborne,” Harris said. “I was Marines Corps. And Mike…well he was a drummer.” 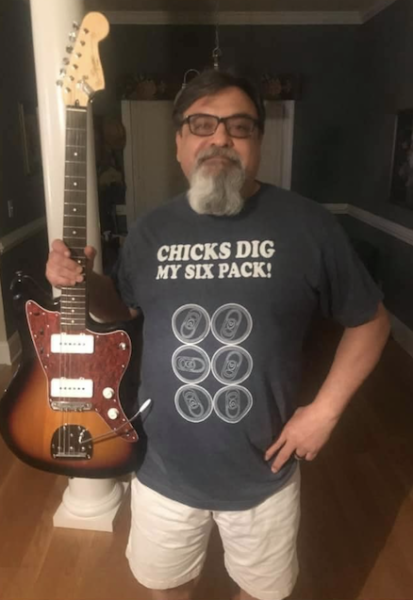 “I worked at a prison out in Hyde County,” Solano said. “That’s where my wife worked, teaching, when I got out of the Army. I played in a band around there for a long time called ‘Second Time Around.’ Out there, there wasn’t a music scene, so we played for everything. From freaking girls graduating from nursing school to funerals. They only had one band.”

Back in California, he played in a band called Felony Flats:  “It was the nickname of the town I grew up in, in Fontana, California, a steel worker town. It was a classic rock band, originals. I have a tattoo of one of the songs I wrote on my arm. Talk about thinking you’re going to be famous? I was that guy. And then I go from being in a band called ‘Felony Flats’ to going in the Army and then being a freaking prison warden. And guess what happened? As soon as I retire from that, I’m right back to it. I’ve just loved music since I was a little kid. But I learned a lot of my stuff in my 50s.”

Describing their style of music as “blues, classic rock, and country,” Harris explained. “We’re at the age now that we’re not in competition with any other bands. We just want to put on a good little show for two and a half hours when we can.”

The band played at Piratefest this year and just this week at Grimesland Park’s Friday night concert series. Follow their Facebook page, “Six Pack Band,” for their performance schedule.

Six of one, quarter dozen of another, when the Six Pack Band is playing, who’s counting?

Originally published in the Daily Reflector May 21, 2022. 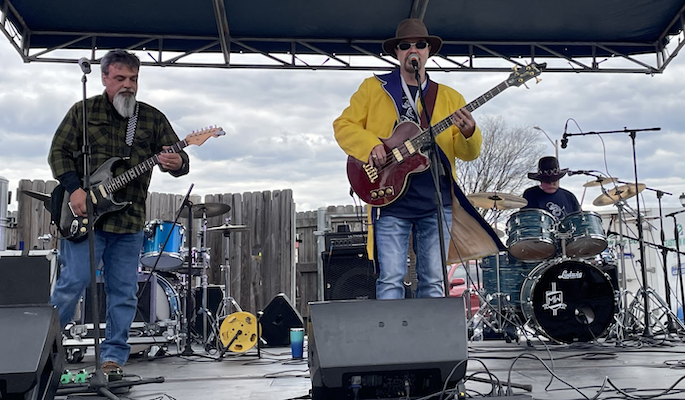