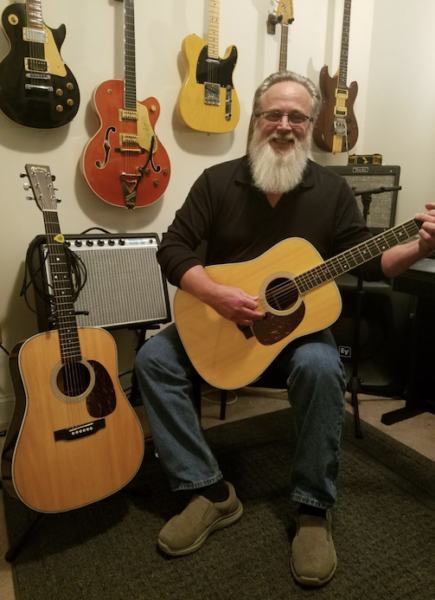 Tommy Stalls & some of his guitars

“I spent most of my life playing rock and roll in bands nobody ever heard of, going back to the 19’80s,” he says. But in the past year, he’s started focusing on acoustic and bluegrass. That includes traditional bluegrass and music from the likes of Billy Strings and the Steel Drivers.

The multi-instrumentalist grew up with classic country, like Johnny Cash and Chet Atkins. But also Eddie Van Halen.

He was influenced by his dad, who still plays guitar at age 79. On weekends they play together. His dad is Melvin C. Stalls II and is also called Tommy. Turns out, there’s a story behind the name.

Stalls’ great-granddaddy wanted to name his child Tommy, but his wife wouldn’t agree. She said that it wasn’t a real name. So they settled on Melvin. The letter “C” was put on the birth certificate for good measure but didn’t stand for anything. Still, his great-granddaddy called his son “Tommy.” As did the next generation and the next. So Stalls shares not only a love of guitar playing, but a name, with his dad.

“When I was 15 or 16 he had an old electric guitar that he let me play,” he said. But Stalls was raised hearing “cowboy chords” like C, F, and G. So when he heard songs on the radio, he said, “What kind of chords are Eddie Van Halen and Ted Nugent playing? They don’t sound like what my dad’s showing me.”

Eventually he met others in high school and they showed him some things and he started picking up barre chords and playing in bands.

The Ayden resident played trumpet and tuba in high school marching band at Greene Central, as he grew up in the Snow Hill area. His family relocated there from Roanoke Rapids. This was during the era when marching bands, and Greene Central’s especially, were a big deal. “We went everywhere–Macy’s parade, Disney, the Kentucky Derby,” he remembers.

In the late ’80s he played in a few bands in the Wilson area. He just moved to Ayden about 4 years ago: “I always had friends here, though–I used to work at Print One back in ’86.”

Stalls gravitates to playing guitar, bass, and mandolin. He also enjoys songwriting. One original song that he is particularly proud of is called “Monterey.”

“I was a history major and had a minor in English,” Stalls says. “All I did was read and write. But I found that I wrote papers better in long-hand. The words would just spill out.”

And he feels the same way about writing song lyrics. The song was influenced by the early ’70s Eagles sound and is about meeting someone at the beach in the summer.

But he must have a good imagination because, he adds, “I’ve never set foot in California and I’ve never met a girl at the beach.”

These days Stalls plays mainly for his own enjoyment at home, surrounded by his guitar collection, or at friends’ houses. But be on the lookout. He plans to start getting out to some local open mics soon.

Originally published in the autumn 2021 issue of Ayden Magazine as part of the feature article “Collard Greens and Guitar Strings.” 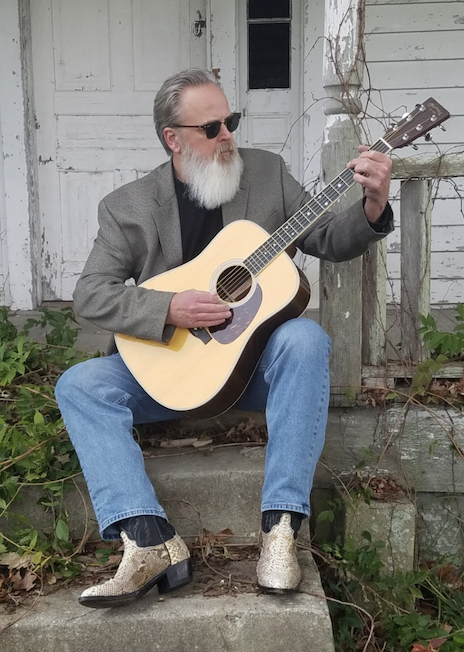