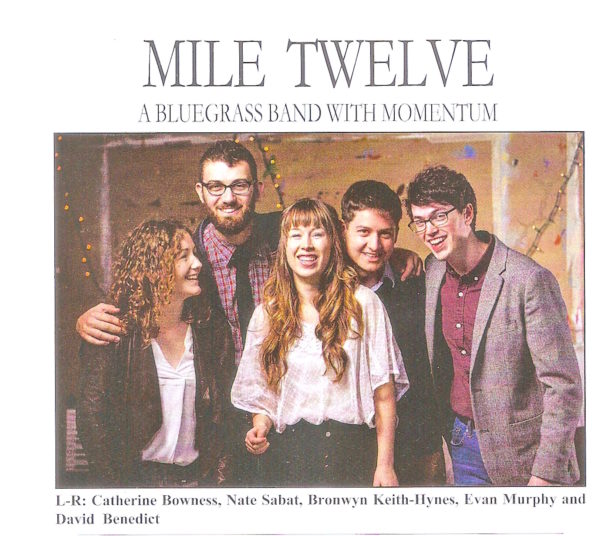 When Boston’s Mile Twelve first played RAF, it was easy for all here to tell that they were some special performers, which they’ve since proven with their national and international tours and awards. The first couple of times they played Fountain, they stayed at our house prior to heading on to Raleigh for the IBMA meetings and shows. In 2019, I found a Monday night bluegrass jam at Mona’s in New York, where a young banjo picker from Australia also happened to be, and when he found this out, first he wanted a description of our house, and then he couldn’t stop exclaiming for several minutes and then again throughout the evening, “I can’t believe BB Bowness stayed at your house!”
Bowness, from New Zealand, started banjo at age 12 and seems clearly from an early age identified as a prodigy. Bassist Nate Sabat, from New York, and fiddler Bronwyn Keith-Hynes from Charlottesville, met at Berkelee School Music where they enjoyed Boston’s rich bluegrass scene and also met guitarist Evan Murphy, then a Boston College student. Mandolinist David Benedict was the only one in the band with professional experience when they formed, in Boston, in 2014.
One of their early champions, Dale and Darcy Cahill report in Bluegrass Unlimited, was Tim O’Brien, and Tony Trischka has also been lavish in his praise for their impressive talents.
They are also very nice house guests.